Before heading to the States for our summer holiday, I spent my last weekend in Singapore exploring various facets of Asia.  This started with a visit to the Gurdwara Silat Road Sikh Centre, one of seven Sikh temples in Singapore.

My friend Ritika had invited me to come to a special prayer service that was part of her son’s graduation celebration.  This involved sitting in a circular room on the floor, the women on one half of the room and the men on the other (though there was enough mixing to make clear that this wasn’t a hard and fast rule).  The focal point was a man chanting the prayers on a tall dais in the center of the room.

Sikhs worship one immortal being and a series of gurus, and its adherents are largely Punjabi.  Fortunately for me, while the service was in an Indian dialect, there was a screen with English surtitles that allowed me to follow along.  I was most interested in the lines of scripture that involved elephants and tigers, and also in the threats to those who dare to slander Guru Nanak (these include “being reborn again and again… being reborn as a wriggling worm … being reborn as a snake .. and being left all alone, like the miserable barren sesame stalk abandoned in the field”).

Ritika was concerned that I might feel out of place in western garb at the service, so she generously bought me a traditional Indian outfit:

I was grateful to have these clothes at the prayers — I was the only white person there, and this outfit helped me blend in.   But it felt very odd to walk around the streets (and in the MRT, and in my apartment complex) in these clothes; I was unusually self-conscious.  Also, this is more pink than I’ve ever worn in my life.

My walk after the service took me past the Sri Layan Sithi Vinayagar Temple, a Hindu temple in the Outram Park neighborhood. 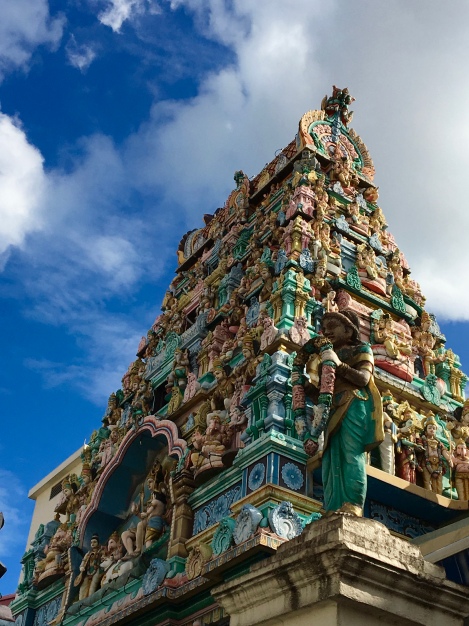 The central figure of worship at this temple is Ganesha, the elephant god.  You can see him riding his vehicle, the mouse, in the middle at the bottom of the tower: 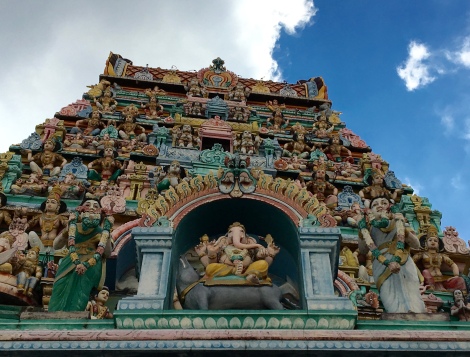 I’m not sure what was being celebrated, but there were drawings all over the floor of the temple that I had never seen before:

I also passed by this sign in Chinatown — I hope I’m a member of a club like this someday:

On Sunday I returned to the Asian Civilizations Museum to spend more time in their exhibition on the Joseon, Korea’s last dynasty.  The Joseon emperors ruled for many centuries, from 1392 to 1897.  Their rule was largely benevolent — they followed strict Confucian principles — and they exercised great power.  This is how all of the kings were represented:

I love the drums being played at this banquet:

The emperor wore a fancy robe … 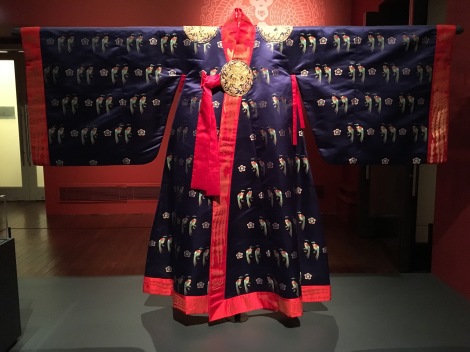 The future mother of the heir to the throne, each queen was held in high regard.  The selection of an appropriate queen was so important that when the emperor needed a bride, a temporary ban would be placed on the marriage of all girls of around age fifteen.  Civil servants would then help search out a young woman using a rigorous screening process, which included requirements like a suitable date and time of birth and that she have two living parents (I’m not sure why that part mattered, but it did).

The royal family stored their children’s placenta and umbilical cords in special jars (made of the simple white porcelain favored by these emperors), believing that this would protect the children from harm. 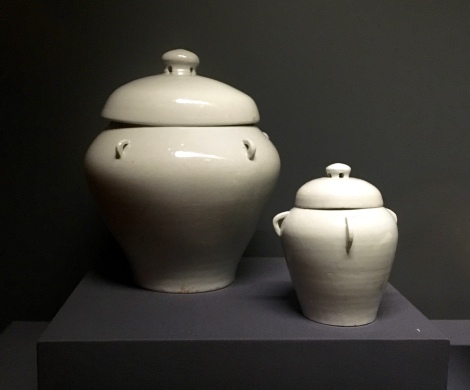 Tigers were much in evidence at this exhibition; they were a Joseon symbol of both fierceness and protection.  This friendly tiger might have acted as a family’s protector …

… and this white tiger, the guardian of the west, would have been carried in royal processions. 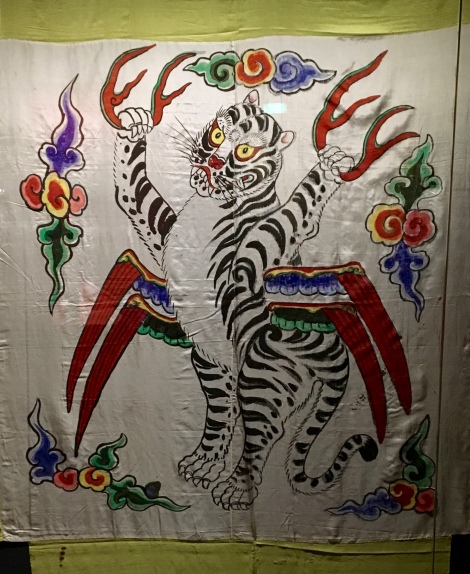 Royal processions were a big deal, so much so that they were captured by court artists in elaborate detail.  King Jeongjo’s  yearly procession in the late 1700s to visit his father’s tomb involved 6,000 people. 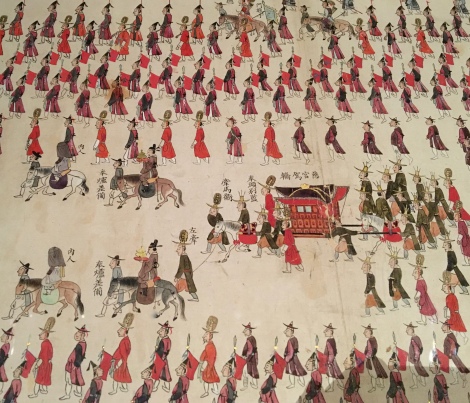 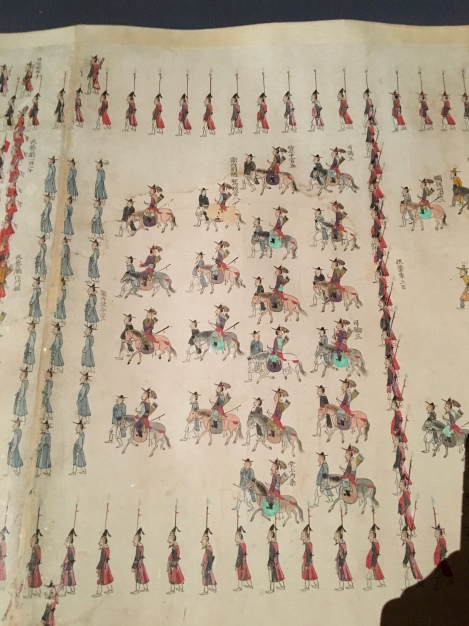 I love the detailed figures in this scroll:

The highest social class (aside from the royal family) was the yangban, civil servants from distinguished families who sat for highly competitive civil service exams.  Men would spend years studying for these exams, sometimes only becoming part of the yangban when they were in their fifties or sixties.  This member of the yangban would have been one of the most powerful men in Korea:

The scholarly arts — calligraphy, poetry, and painting — were much prized during the Joseon dynasty.   Here are the literati out practicing their skills together… 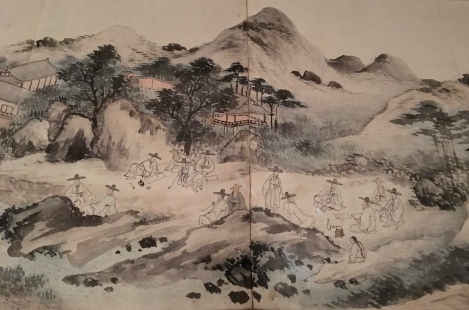 … and here is an elegant painting of an orchid plant that one of them might have produced:

Life during the Joseon dynasty revolved so much around upright Confucian principles that Buddhism, which had been a prominent feature of the previous dynasty, was largely shunted to the side.  But someone did take the time to paint this mountain spirit, which I find both appealing and a little creepy:

The exhibit on Joseon Korea is well worth a visit — it has many beautiful pieces and is educational as well.  I’d never thought much before about pre-20th century Korean history (though some people are much immersed in it — I gather that the dynasty is popular in K-dramas).

One response to “Emperors & Gods”