Bangkok, where I traveled for a conference, is a sprawling, unplanned mess of a city. Some people find it charming because while it has grown, it has retained many of the features of the city it was a century ago — street food, shacks that still stand amidst the high rises, grit. I find it overwhelming. But it’s fun to see from the fifty-seventh floor of a hotel:

That’s what it looks like on a good day. On many other days, it is clouded in haze and smog (yes, that’s a daytime view):

The river, sadly, is always brown.

The view from the other side of the building gives you the best sense of Bangkok’s endless sprawl: 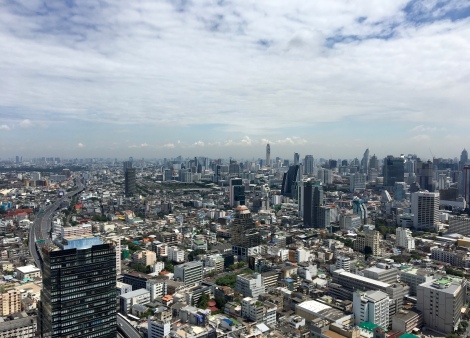 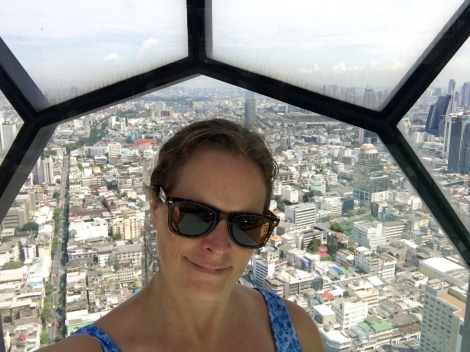 My hotel, the LeBua, has the highest rooftop bar in Bangkok …

I spent my one free day in the city going to two different markets. My first trip took me to the Flower Market (Pak Klong Talad), the largest setup of flower stalls in Bangkok. I was excited to see lots of different kinds of flowers, but I quickly learned that they sell a very narrow range of flowers (orchids, marigolds, jasmine) for a very narrow range of purposes (crafting and selling items for religious offerings). The stalls start to look very similar very quickly … 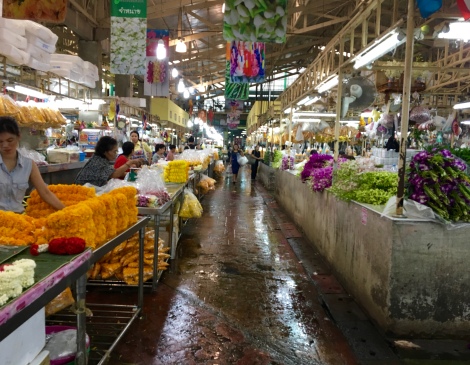 … as do their wares: 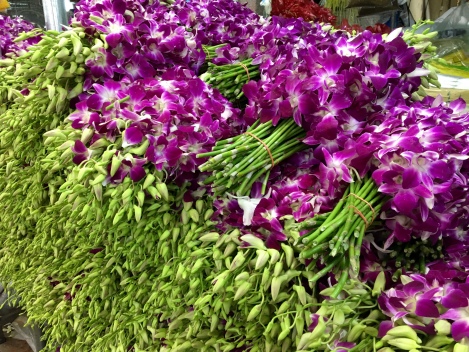 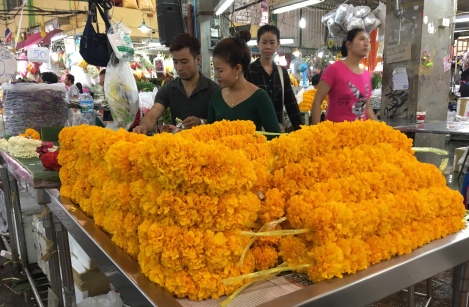 The only flowers that I did not recognize were these:

I liked the baskets that held hundreds and hundreds of blossoms:

Many of the sellers spend their days making beautiful garlands called phuang malai:

It is amazing to watch them at work, their long needles moving like little swords: 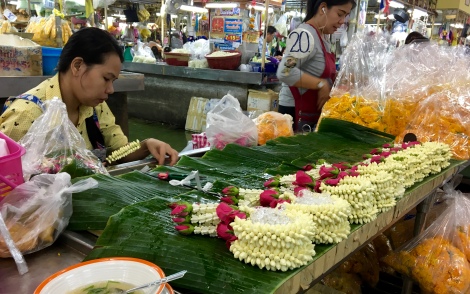 Other sellers make various kinds of offerings wrapped in plastic:

I find it very curious that fake cigarettes are on the list of acceptable offerings.

The market has stalls on the side that sell what I assume to be offering-related plastic products:

This guy thought it was very funny that I asked to take his picture while he worked at making wrapped offerings:

The flower market also holds a wet market under the same roof, and I wandered around admiring fruits, roots, and vegetables that were both well known to me… 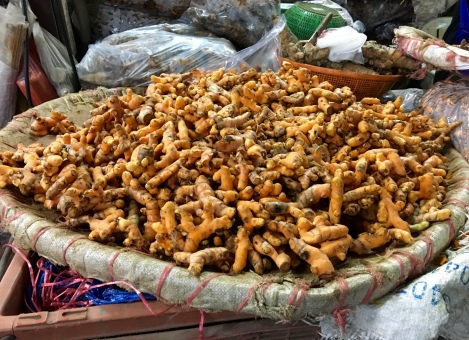 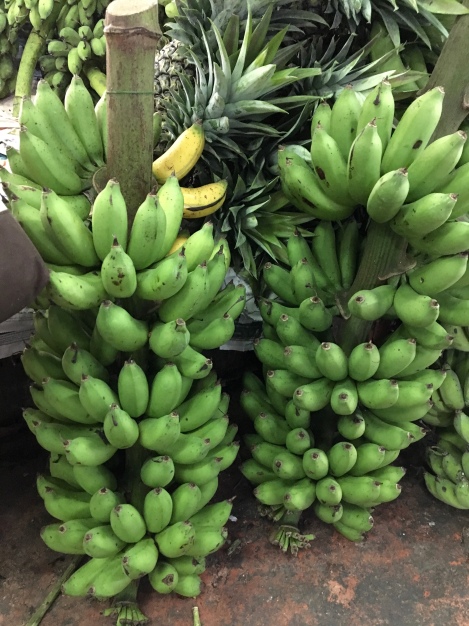 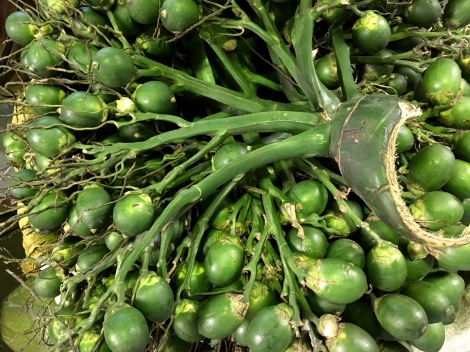 I often leave wet markets wishing that I’d had a tour guide, and this time was no exception.

As a side note, this market appears to have live-in cats: 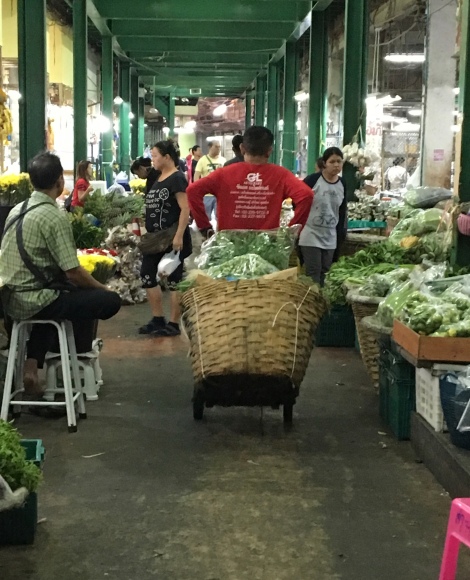 … and how they transport things to the market …

… and that there appears to be housing immediately above the market stalls (also note the mess of wires hanging in the air, a sign that you’re definitely in a southeast Asian city): 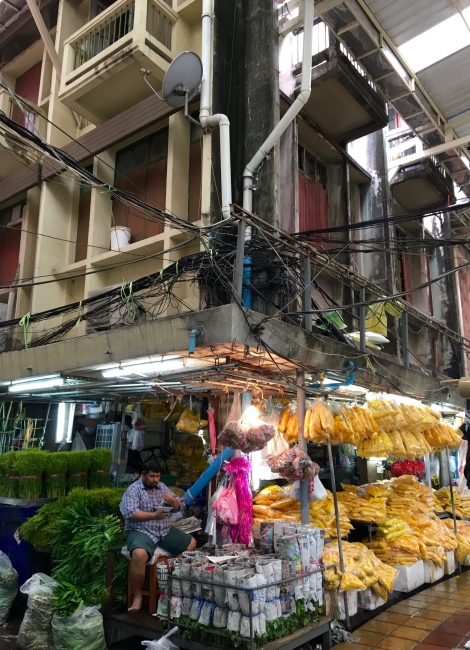 When the sales are complete, these garlands and other offerings end up all over the city. I saw these hanging on a haphazard altar in a tree that appears to be taking over the sidewalk … 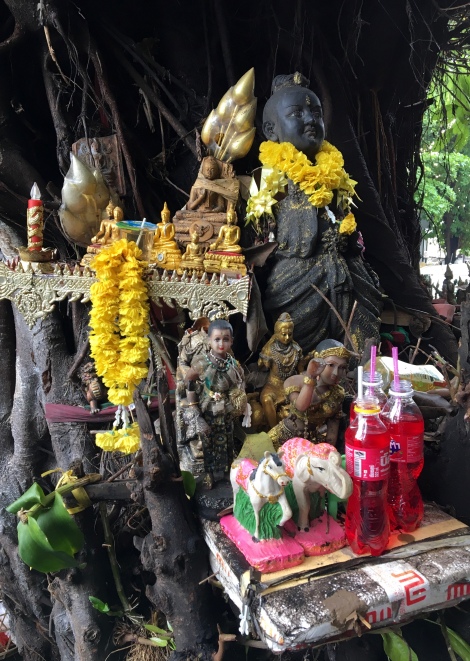 … and if you look closely, you can see garlands hanging just under the rearview mirror of this tuk-tuk (our first tuk-tuk ride into town was quite a party …):