After a frustrating Airbnb experience — at 7:00pm, the host at the Forgotten World Motel, where we had made a reservation, told us that she had given our room away to someone else — we spent a night at the Taumarunui Holiday Park. 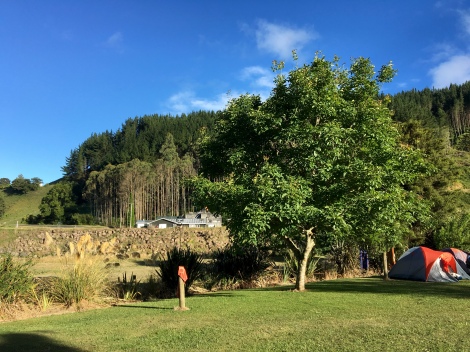 This was a much better example of New Zealand’s holiday parks than the one we’d stayed in the night before in Putaruru; the Taumarunui park was set back from the highway among some trees and along a river. It was well populated by campers and felt pretty homey.

We set out early in the morning to pay a visit to Tongariro National Park, the first in New Zealand’s National Park system, which was created in 1886 by a local chief who did not want to see the land taken and decimated by the Europeans (a reasonable fear, given the rampant logging and mining going on at the time). We made a brief side venture to see the Raurimu Spiral lookout, where we thought we might see the Raurimu Spiral, a work of railway engineering genius that we’d read about in our guidebook (when you’re on a long road trip, you read about all sorts of strange things in your guidebook). But when we climbed up the lookout tower, instead of the actual spiral, we saw this:

We found this very, very strange. It’s a model of the spiral, yes, but done on a pretty wacky scale and out of very odd materials. It left Prescott looking like this: 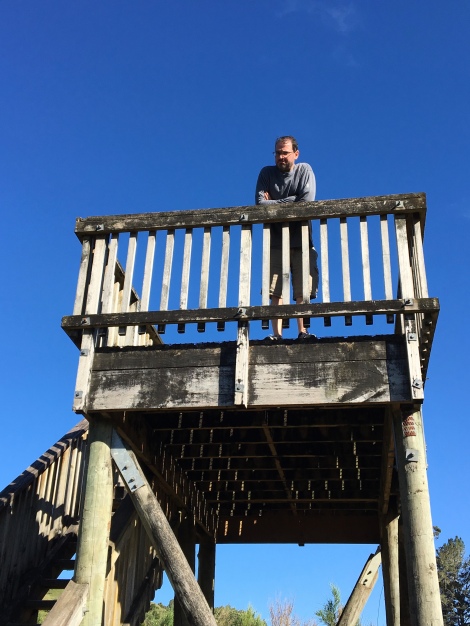 Fortunately, we found several things to mitigate our disappointment, including this kitten (which nearly followed us to our car) … 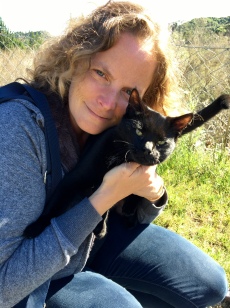 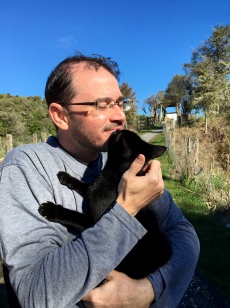 … these foxgloves, which grow wild along some of the roadsides …

… and this completely unexpected (and unexplained) T-Rex:

Our drive to Tongariro took us past this warning:

Sadly, we’re unlikely to see any actual kiwi birds; they are nocturnal and notoriously reserved, so few New Zealand visitors are lucky enough to find them in the wild.

Once we arrived at the park, we headed out on the Taraniki Falls and Lake Tama hike. We spent about four and a half hours in hilly, extremely windy alpine terrain. But because we were out in the open for nearly all of the hike, we had views the whole way along. The hike starts out in a prairie-like area …

… and if you turn around, mountains start to appear behind you:

The landscape often feels quite barren; there is a lot of geothermal activity in the area, and part of the hike is on an old lava flow.

Taraniki Falls itself is a sight to see:

Here’s Prescott up on the trail: 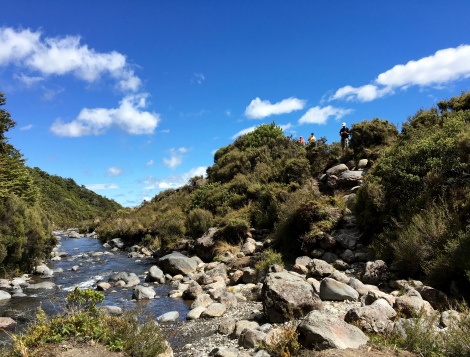 After you climb the cliffs along the waterfall’s edge, you come up to this view of Mount Ruapehu:

And a little further on, it looks like this:

We followed the trail to Lower Lake Tama, which sits at the bottom of a large basin (you can’t hike down to it). The color is just stunning.

While I would have liked to have spent more time by the lake, the wind was picking up, so we sat in the lee of some rocks and had lunch overlooking this view… 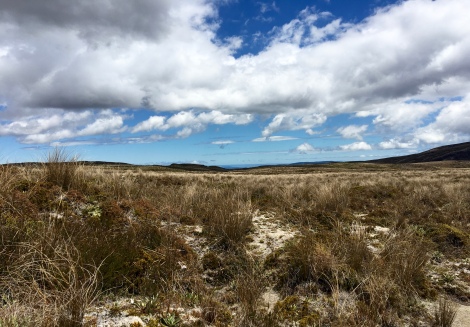 …where I finally warmed up again.

Back on the trail, the wind just kept going and going (my hair tells the whole story)…

… and we finally had a view (mostly) of this mountain, which had been in front of us — and buried in clouds — for most of our hike. This is either Mount Tongariro or Mount Ngauruhoe (which played the role of Mount Doom in the Lord of the Rings movies), I’m still not sure. But I’m hoping it’s the latter.

I would be remiss if I failed to give a shout out to the many flowers along this trail. They were tiny — alpine flowers always are — but I was still thrilled to find them. 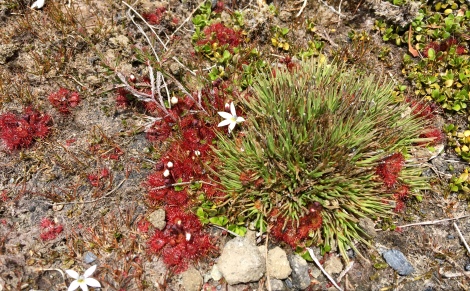 New Zealand also has many different kinds of ferns. This is one of the smaller ones I’ve come across thus far:

And I also came upon several of these in the small (but welcome, for respite from the wind and sun) forest area:

After our hike, we took a long drive southeast to the town of Napier. Along the way, we passed by gorgeous Lake Taupo…

… about a thousand sheep (probably more), and this rainbow over a recently-logged area: 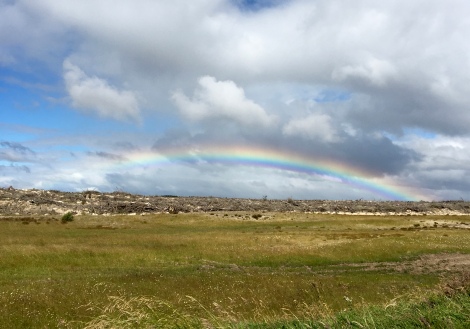 Our final stop of the evening was at the north end of Napier, where we had dinner at an Indian restaurant about a block from the port. 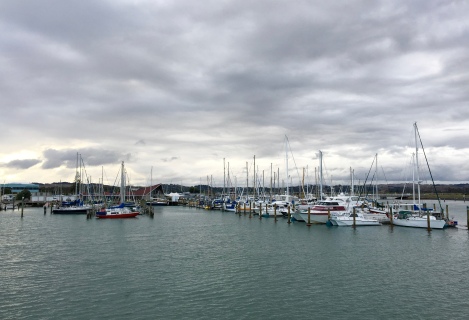