We’ve driven inland, coming up into the mountainous center of New Zealand’s South Island. The road took us past Lake Aviemore, part of the enormous Waitaki hydroelectric setup. 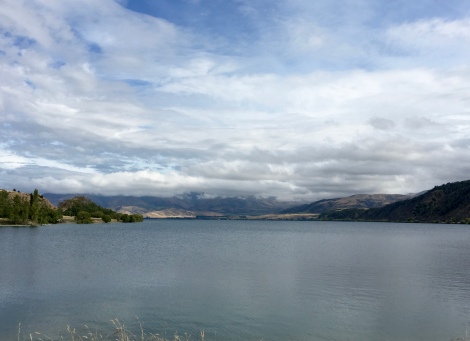 This series of along the Waitaki River provides a full fifth of the power on this island. And it also makes for some really nice driving views.

The eco-friendly hot tubs at HOT Tub Omarama tempted us away from the road for an hour.These tubs aren’t fed by hot springs; they’re filled with mountain water, and each entirely private cedar tub is individually heated by a wood fire. The tubs themselves aren’t much to look at … 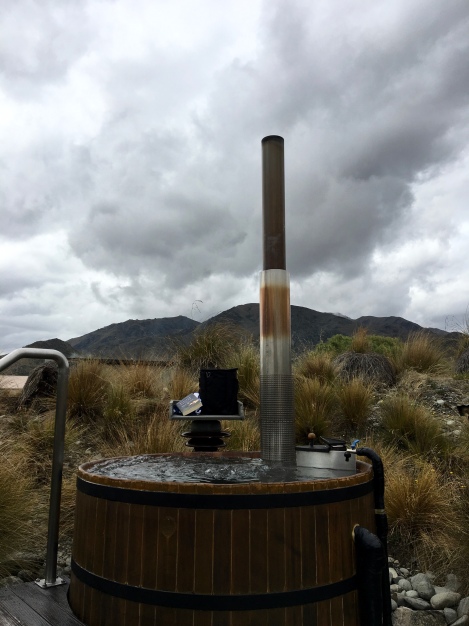 … but it’s wonderful to soak with these views … 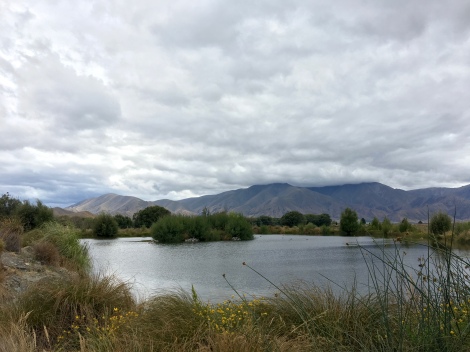 … and with the scent of cedar and a wood fire in the air. I hadn’t wanted to go at first – it’s expensive, and it seemed odd to go to hot tubs that weren’t spring-fed – but by the time we were done soaking, I didn’t want to leave.

Once you get up into the hills beyond Omarama, you briefly enter orchard and wine country. That is evident from this odd roadside display (which is how you’re welcomed to the town of Cromwell):

We stopped to see Roaring Meg, another piece of New Zealand’s hydroelectric setup (what looks to be a cool waterfall to the right is water as it’s exiting a power station). 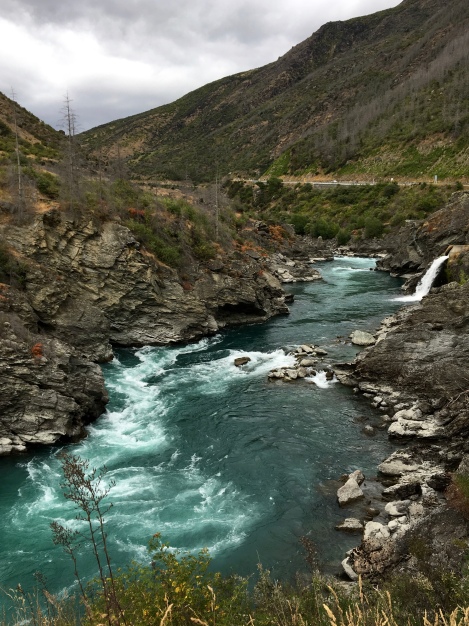 The final destination of the day’s journey was the much–ballyhooed city of Queenstown. People flock to Queenstown for its access to exciting activities (speed boat tours down rivers; bungee jumping), its wide range of shops and restaurants, and its picturesque location at the bottom of a mountain-ringed lake. But it took about four minutes of traffic and looking around at the streets thronged with tourists to make clear that Queenstown was not going to be the place for us. In fact, once we’d stopped in town for dinner, I felt like I couldn’t leave fast enough. It’s just too crowded and doesn’t have a whole lot of character. The one upside was Prescott’s fabulous coffee sundae at Patagonia’s.

Fortunately, our Airbnb fifteen minutes north of town put us in a whole different world. It was at the top of a road called Alpine Retreat, which should tell you everything you need to know. Here’s the view out of our A-frame windows:

I had a good time walking around and taking photos of flowers in the neighborhood, especially foxgloves …

Our apartment wasn’t far from Moke Lake, so we braved our first sheep-in-the-road encounter to get to a long dirt road.

Along the way, we passed more sheep. It turns out that it’s hard to drive in New Zealand and not pass sheep. I think we’ve seen them just about every day since we arrived. 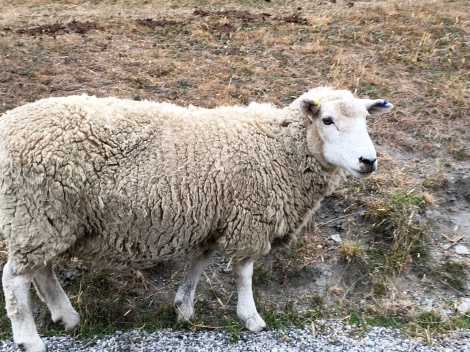 New Zealand has the highest sheep density of any country in the world, and it’s hard to imagine what the landscape here would look like without them. Sheep have eaten most of the plant life in the country to a stubble, and what the sheep haven’t eaten, farmers burned years ago to make way for more grazing area. So everywhere you go, you’re likely to see swathes of grassy area where once you might have seen forests or bush.

Even with nearly-bare hills surrounding it, Moke Lake is beautiful. It also feels totally removed from the world, though it has a small campsite as its base. If we’d been better equipped for camping at the end of a long dirt road (in other words, if we’d actually had food and a stove), we would have camped there. It was tranquil and beautiful in the evening light.

We took a brief stroll around the lake as I collected duck feathers (the paradise duck has striking coloring), went over to pet the horses out in the field by the lake … 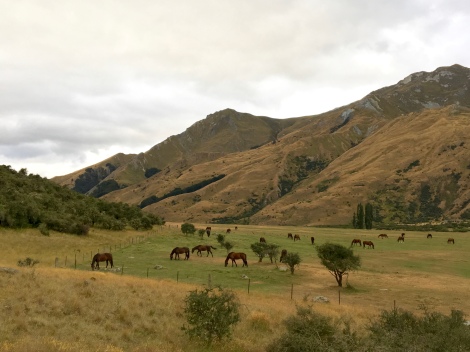 …and took lots of pictures. 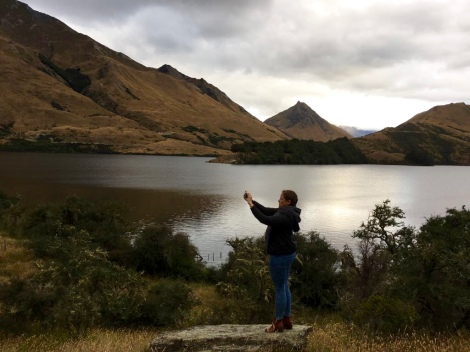 We left the valley as the sun was going down … 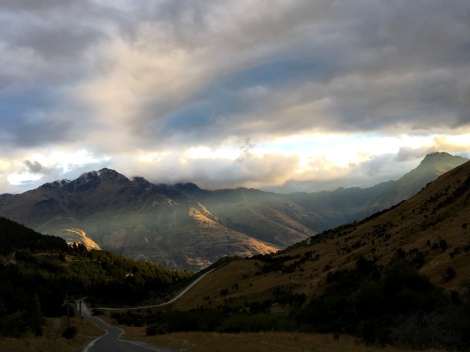 .. and watched the rest of the sunset from a pullout on the road up to our house.