Singapore continues its love affair with projecting art onto the side of its public buildings. They call these projections “light skins,” and the latest bunch are coming to us courtesy of the Light to Night Festival. I’m a sucker for this art form — I just love the way that it can change the look of a building’s facade. The images — all created by Singapore artists — were remarkably varied. Here are several projections on the tower of the Victoria Theatre and Concert Hall: 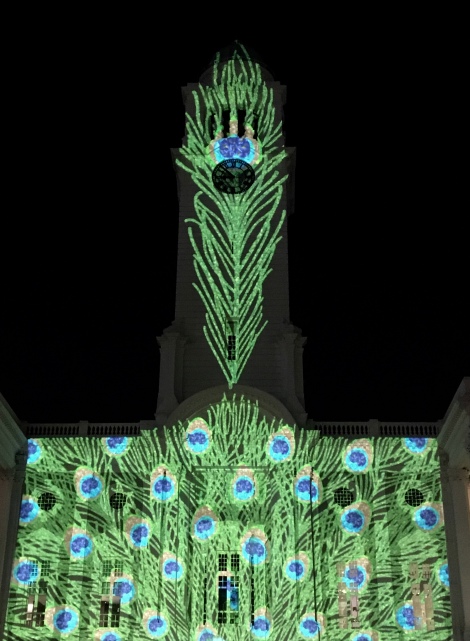 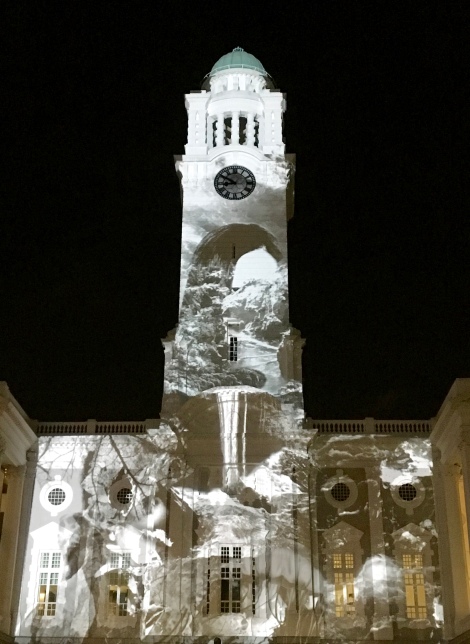 We just sat out on the lawn and watched the images shift from one to the next.

This piece was my favorite piece on the tower — it’s a drawing of Sir Thomas Stamford Raffles, the British founder of modern Singapore, projected up above a statue of the man himself that suddenly looks tiny in comparison:

… light structures and displays in the nearby parks …

… and videos on the facade of the Arts House:

Prescott and I took the chance to go inside and visit the old parliament chamber that remains preserved on the second floor of what is now the Arts House.

The very first Singapore Parliament opened session here in December 1965. The room is modeled on the British House of Commons.

This space was used until the opening of Singapore’s new parliament building in 1999. I liked that there were knobs on the arm of each chair that allowed the each legislator to select the language that he (or later she) wanted to hear coming through the speakers behind him.

Back outside, we wandered over to the National Gallery, once home to Singapore’s Supreme Court. This building offered the biggest canvas for the festival’s light skins. 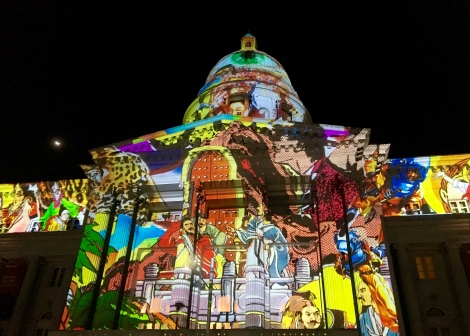 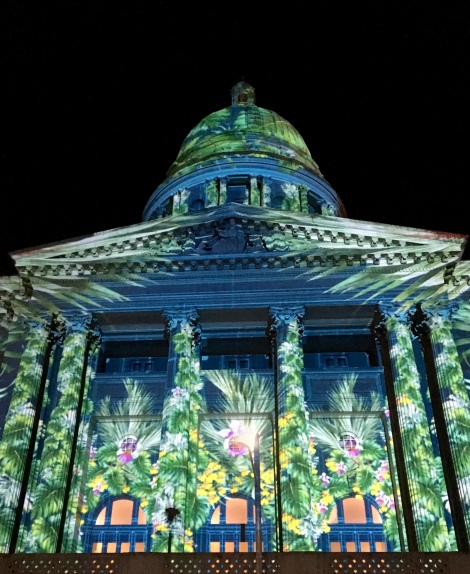 This projections was created to advertise the impressionist exhibit that’s currently running at the gallery (if you squint, you’ll recognize Monet):

The National Gallery has all sorts of wonderful things. The week before, I visited Violet Oon, an amazing (and beautiful) Peranakan restaurant that is housed within the Gallery. They served the best kueh pie tee I’ve had in Singapore:

In this same neck of the woods, I also went to hear the Singapore Symphony Orchestra perform Walton’s Viola Concerto and Berlioz’s Symphonie Fantastique at the Esplanade Concert Hall. What a great performance space! 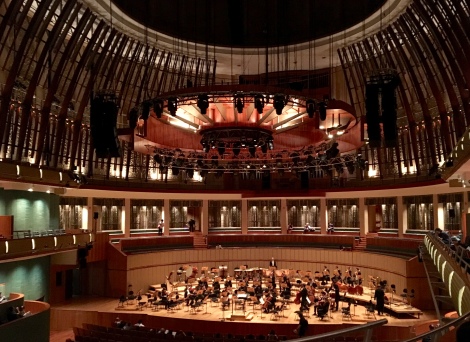 The music was lovely. The only problem was the audience, which seemed to feel the need to cough loudly and at length between each movement (this then led to people starting to talk between the movements about how much coughing was going on, which made for an even more disruptive concert-going experience). It was a very strange bit of group behavior.