My dad is in Singapore! 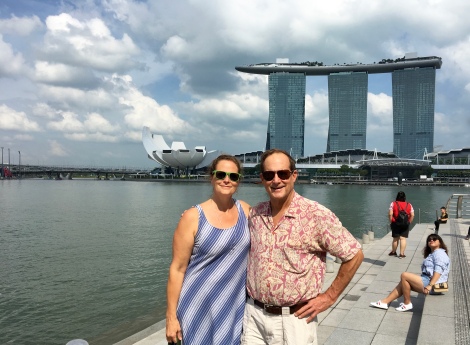 For his first morning here, we started with a trip to the Bukit Timah Food Centre, a hawker stall where he tried things like chicken rice, popiah, and braised duck. We also took a turn around the wet market, where we spent a while investigating the fish for sale.

I’m still not sure what this scary thing is:

We hopped on the MRT and rode down to Clarke Quay, where our plans for a leisurely stroll along the Singapore River were dashed by an unexpected rainstorm. Fortunately, Clarke Quay and Boat Quay don’t lack for people who want to sell you things while you while away the hours in an attempt to stay dry, so first we sat in faux British pub watching rugby and snacking on fried whitebait (think small fishy fries with tiny eyeballs), and then we went over to the Fullerton Hotel. There we had tea in the very fancy lobby…

… complete with one of the best chai teas I have ever had and a beautiful mango-passion fruit tart:

The sun kindly came out after tea, which allowed us to look at the boats on the river …

… and to visit the Merlion (along with hundreds of other enthusiastic tourists). 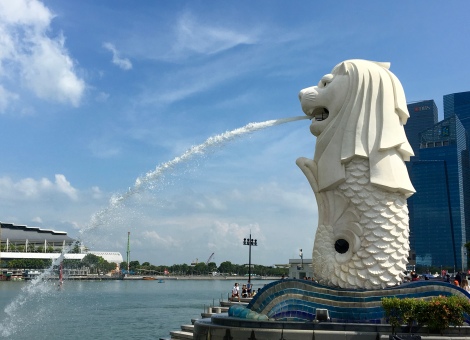 Our evening ended at Kinsa Sushi, right downstairs from our apartment. The big hits there were dad’s paper pot dish, which involves veggies, scallops, and soup being cooked inside of an actual paper dish over a lively fire …

… and the robot! They have purchased Techi, a robot who serves people salads and sushi with a smile. The robot didn’t actually come to our table, but we had several opportunities to watch it in action.

For dad’s second day, we focused our efforts on the Marina Bay area. We first went down to Gardens by the Bay: 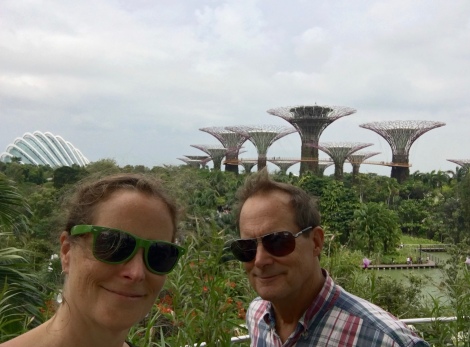 At the entrance, we hopped in The Auto Rider, Asia’s first public “fully-operational self-driving vehicle”:

It felt surprisingly normal to be riding in a little pod with no driver. We had fun watching the screen that showed us where all of the pedestrians were (this knowledge allows the vehicle to avoid them). The trip was very slow, because (1) Gardens by the By has a 10 kilometers/hour speed limit, (2) the pod stopped for a lot of clueless pedestrians, and (3) the pod is so quiet that pedestrians don’t always hear it coming. But I’m really glad we paid a little extra for the privilege of trying it. This is Singapore’s first step toward becoming a city of driverless vehicles!

We spent most of our time at the Gardens in the Cloud Forest, a conservatory that holds a six-story replica of a mountain in tropical rainforest area. 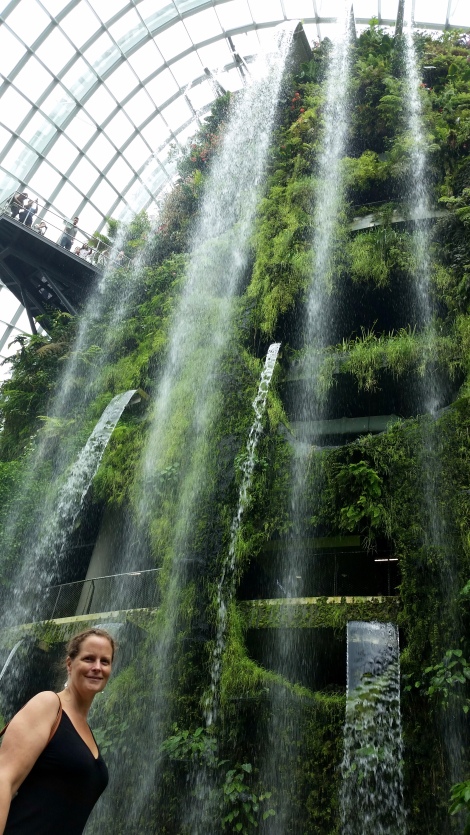 The Cloud Forest is filled with orchids (as a bonus, there’s currently a special exhibit of plants that recently won a whole lot of awards at an international orchid show in Ecuador): 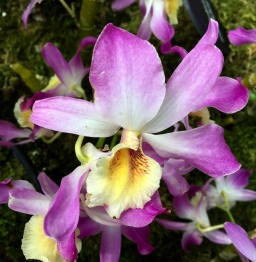 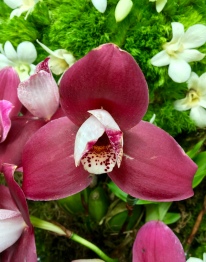 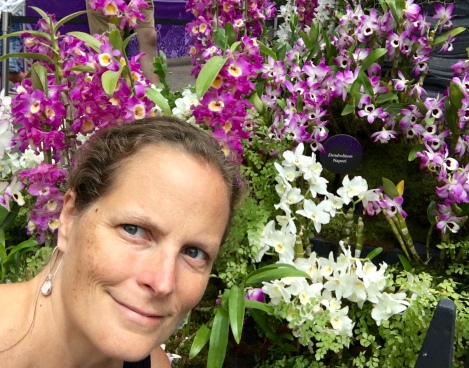 There are other interesting flowers, too: 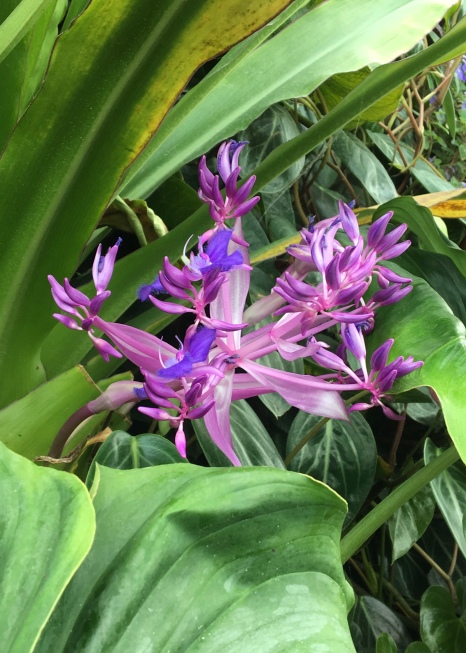 If flowers aren’t your thing, you can admire the fascinating design of the “mountain” and its walkways. 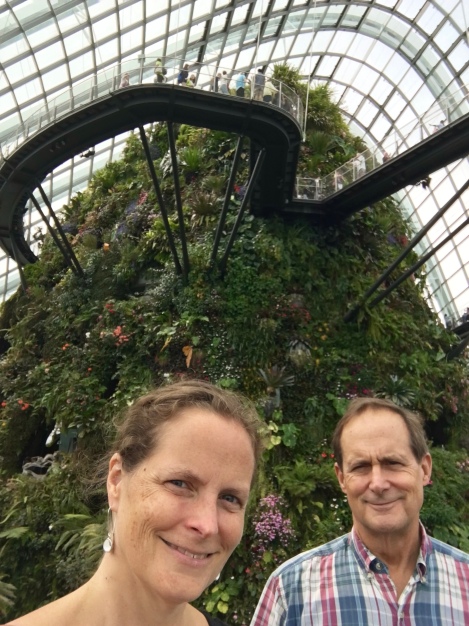 Given the crowds at Gardens by the Bay, you can also engage in people watching, both up close and from above: 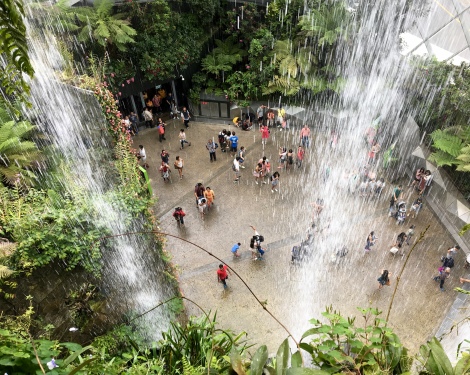 We liked watching the orderly movement of people downstairs:

After we left the Cloud Forest, we paid a visit to the Supertree Grove:

The Supertrees basically act as giant air exhausts for the cooling systems of the Gardens’ two giant conservatories. They are a good example of how smart architects and designers can create something fascinating out of a functional element.

Photographers love these things. Dad explored PhotoShop to great effect once we got home:

Later that afternoon, we met up with Prescott at the ArtScience Museum, an institution dedicated to exploring the intersection of technology, culture, art, and science. There, we went to their permanent exhibit, which is called FutureWorld. It seems to be targeted at little kids in many ways, but we had a great time. One of the highlights was a coloring experience in which we filled in shapes that were then projected on the walls and floor. Here’s Dad’s alligator (the brown stripes are actually question marks, because at first we had no idea why we were engaged in a coloring exercise) …

… and Prescott’s truck (trundling along in front of a rendering of the ArtScience Museum itself):

My little green and blue frog hopped around so much that it was difficult to capture on camera.

Pretty much everything in FutureWorld lights up in one way or another.

They have a wall where you can “touch” symbols and have them turn into forms like mountains, mastodons, cows, and wolves:

This one makes me laugh:

The final exhibit involves thousands of LED lights and some elaborate programming: 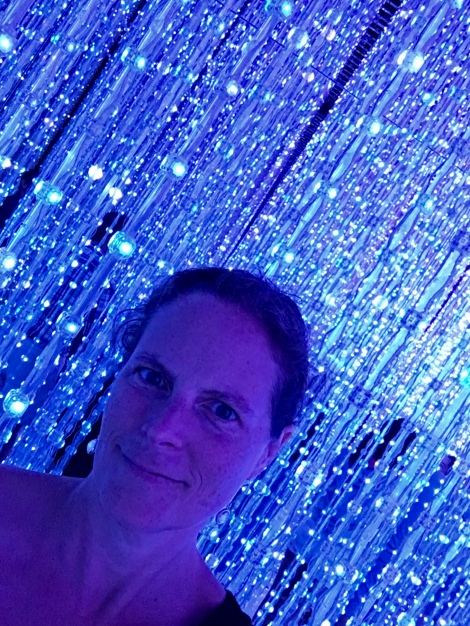 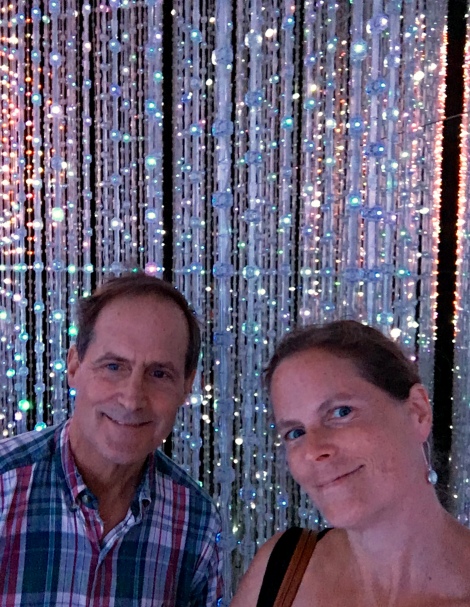 We ended our night with drinks at Spago, which sits on the top of the Marina Bay Sands Hotel (57 floors up). The drinks are pricey, but the views out over Gardens by the Bay and the South China Sea can’t be beat: 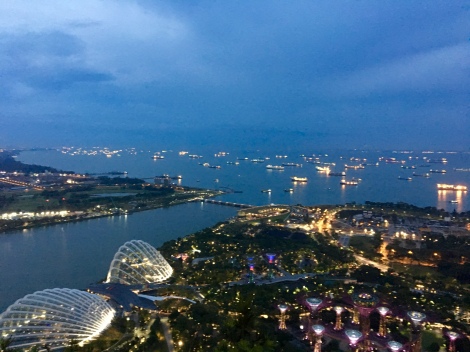 One response to “The River and the Bay”