The Mani, the area in the southwestern finger of the Peloponnese, has traditionally been one of the harshest, driest, most remote areas of Greece. It was one of the only regions never really taken by the Ottomans (though that didn’t keep the Turks from trying). And it was the heart of the Greek independence movement, which saw its birthplace in the town of Areopoli in 1821. This man, Petros Mavromichalis, led the charge: 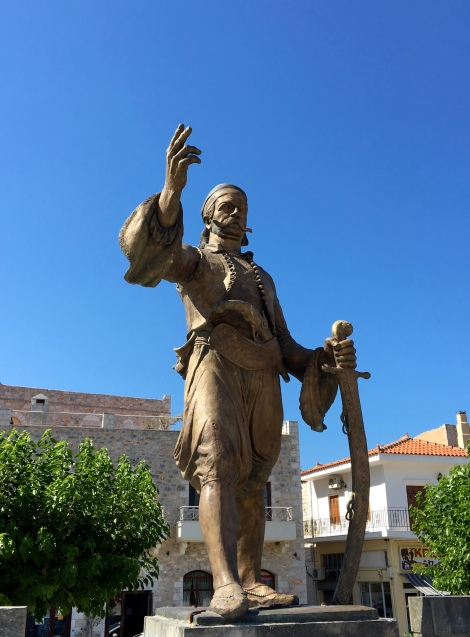 Today Areopoli — fittingly named after Ares, the god of war — is one of the few towns of any size in the Mani. The guidebooks aren’t in love with it, but Jocelyn and I find the town appealing. We like walking down the streets …

… poking around the shops …

… and looking at the old churches and their frescos:

I even got to ring the church bell (quietly) at one of the tiny churches! I love ringing church bells – every church has one – but Jocelyn usually puts the kibosh on my doing it.

We also found our new favorite bakery of Greece, which I think is called το ψωμί της μηλιάς (Google translates this as “Bread Apple;” I’m not sure that makes any sense): 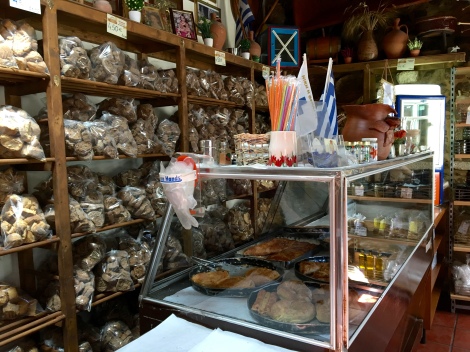 This bakery offered us our first glimpse at someone making Greek rusks, known as paximadi. They tear up loaves of bread and make them into giant dried croutons, which they later soak in water for salads or a dish with grated tomatoes and feta.

We bought a warm cheese and phylo pastry at the bakery that was out of this world. 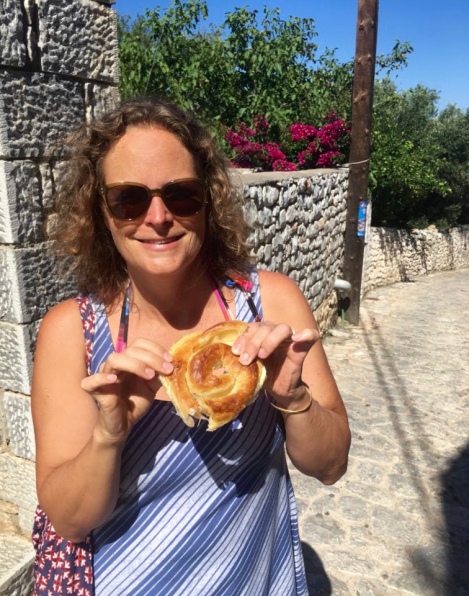 Our next stop in the Mani was the small beach village of Limeni. 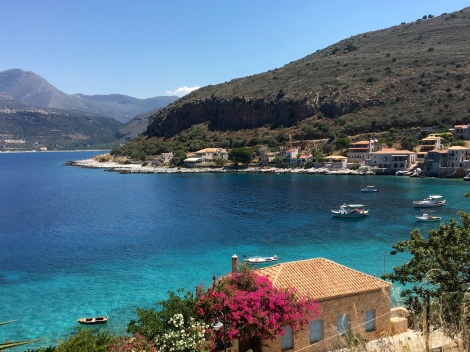 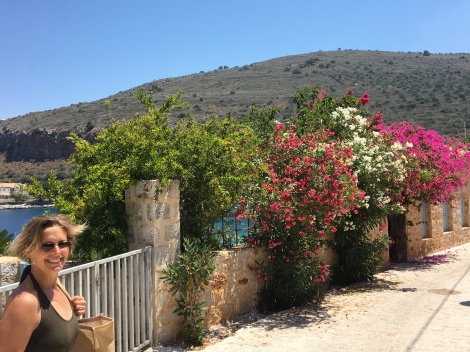 We had a great swim there right off of the town docks, which also serve as a public swimming area. 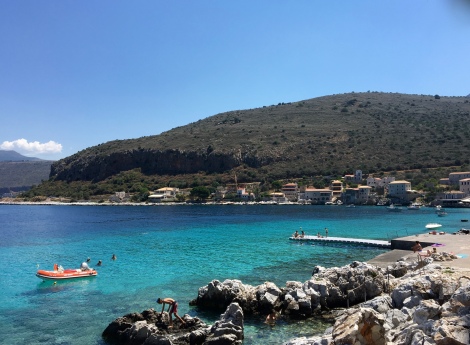 We staying in town for a terrific fish lunch at Takis Taverna. The grilled red snapper was simple and perfect. We took it down to the bone! 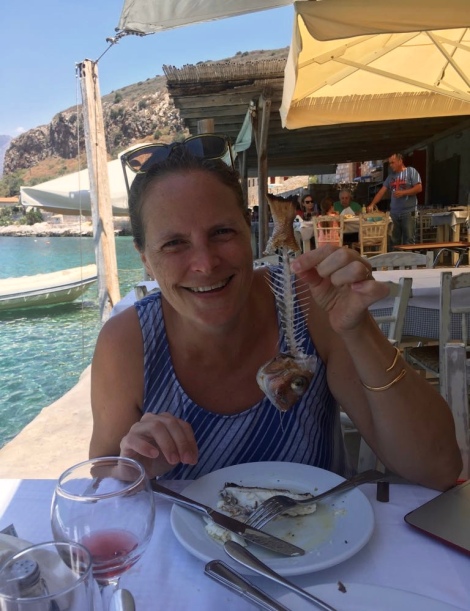 This was our view out over the water from the veranda (and yes, the water really is this color):

We next drove south, zipping through the cute port town of Gerolimenas … 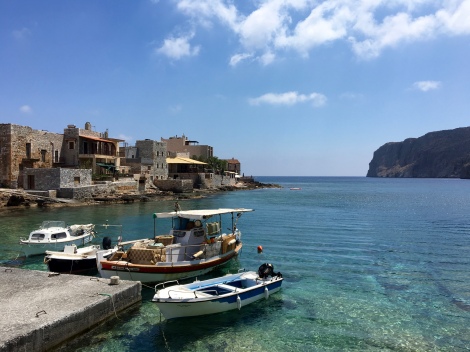 … making a brief stop to see this ruined tower in Oitylo … 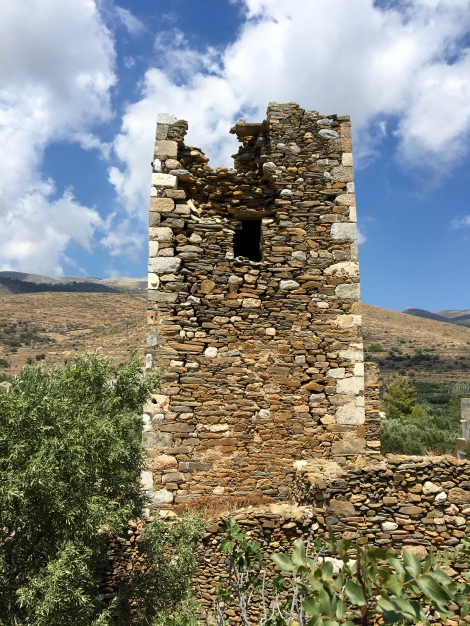 … and finally committing to some beach time at Kyparissos. 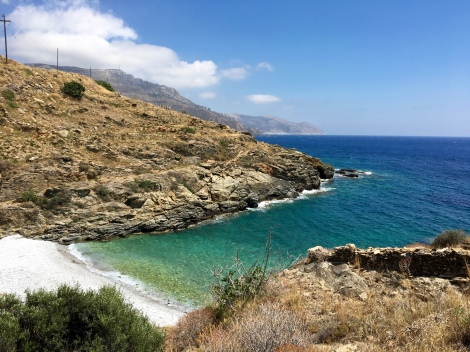 Wow, was this beach beautiful!

But as we’ve learned to expect in the western Mani, it’s also incredibly rocky. 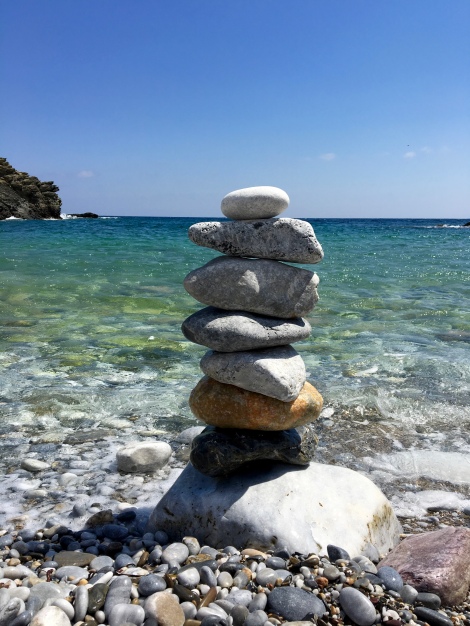 To hear us getting in and out of the water (the word “ouch” is used a lot), you might wonder why we bother at all. But the swimming itself is lovely.

Our last stop along the southwestern coast of the Mani was in the village of Vathia. This town offers a good example of the way that the people of the Mani, known as Maniots, used to live: in huge, blocky, nearly windowless towers that were excellent for defensive purposes.

The Maniots were interested in defending themselves from the Turks, but they were even more interested in defending themselves from other Maniots. The Maniots had a rich tradition of feuding and vendettas, one family sometimes trying to kill another down to the last man. So it was important to build structures in which you could barricade yourself safely indoors.

Wealthy Athenians are now coming down to the Mani and restoring many of these towers, as in the photo above. But you can still wander around the ruins of other towers to see what life might have been like.

Vathia ends up feeling like a ghost town – in June, at least, it’s deadly silent. When you poke around the ruins, you walk into rooms and find old mattresses with the stuffing spilling out, old chairs felled on the floor, or general chaos: 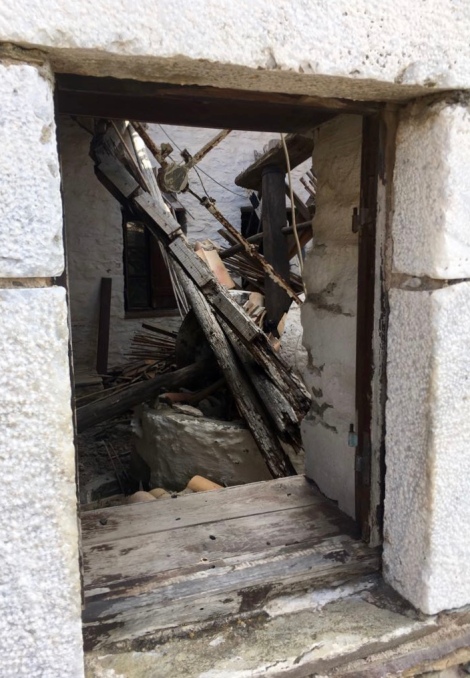 Wanderings to and through these rooms have the potential to be incredibly unsafe. No matter how narrow and steep, the stairs have no railings …

… many buildings have no roofs … 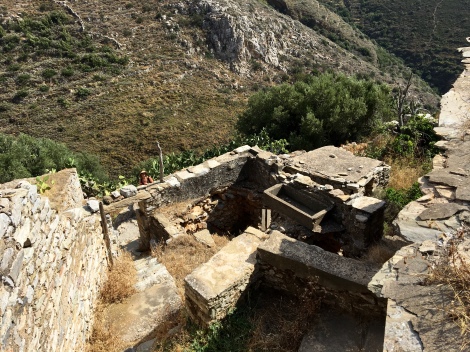 … and lots of the walls look like they might fall down (perhaps right on top of you) at any minute: 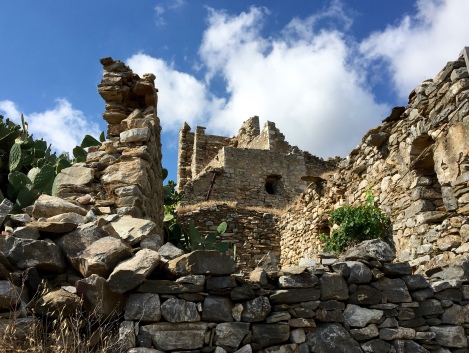 Here’s Jocelyn standing on a rooftop with no railings, next to a house whose roof has fallen in to create a big hole, and in front of a random electrical wire.

This is pretty typical of Greece: they leave a lot of their ruins out in varying states of benign neglect. Maybe they figure that they have other, more significant ruins on which to spend their limited preservations reserves, or maybe they figure that these things have been standing for hundreds of years and a couple of Americans clambering around every once in a while won’t do much harm. In any case, we keep remarking on the fact that you can explore places that are hundreds of years old with very few limitations.

The southwestern Mani feels isolated and remote — it remains sparsely inhabited, hot, and dry. But it has a beauty all its own that makes it well worth a visit.