Prescott and I have fallen in love with Cradle Mountain-Lake St. Clair National Park.

This is one of the most popular parks in Tasmania, and with good reason — you’re surrounded by nature; you can see a lot by car or through the windows of the the park shuttle; and wildlife abounds. If you’re a hiker, you can take your pick of trail length and terrain, choosing anything from the half-hour Enchanted Walk to the 6-day Overland Track. There’s just so much, and I feel like we barely touched the tip.

We took three real hikes (and a few other short walks) over the course of two full days. The first of these three hikes was the Dove Lake Circuit, which I would guess gets the most foot traffic of any of Cradle Mountain’s 2-3 hour tracks. As short walks (roughly 8 km) go, it’s lovely: the elevation gain is never terrible, the terrain is generally well-graded, and you’re often on boardwalk or wide gravel paths. If you’re not there in the middle of fog and light rain — which we were — you get views of the lake for almost the entire track.

Cradle Mountain is up in an alpine region (the namesake mountain rises 5,069 ft above sea level), so the weather is highly variable. We took stock of the park service’s recommended travel items at the start of hike — a warm, waterproof jacket, a beanie, a emergency space blanket — and realized that we had none of them. But we forged on bravely (and warmly enough, as it turned out).

While we saw lots of alpine flowers and one elusive wallaby, this is the best fleeting glimpse we ever had of Cradle Mountain itself:

… which was the site of much hilarity:

Despite the weather, we really enjoyed this hike. The clouds scared off all but the bravest hikers, which meant that we had the trail nearly entirely to ourselves, and there’s something lovely and eerie about seeing a lake and mountains doused in mist.

The other short track that we chose was the Cradle Mountain Boardwalk from the Ranger Station to Snake Hill. We had entirely different weather for this quick morning outing: 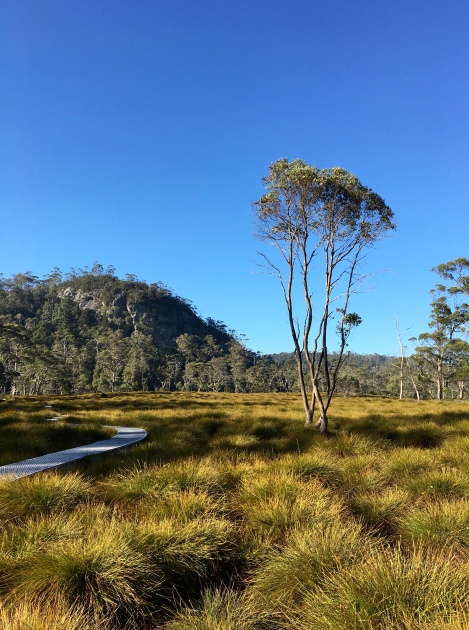 The Boardwalk Trail is exactly what it sounds like: eight and a half kilometers of boardwalk running up and down buttongrass fields and eucalyptus forests. You can hop on and off in a few different places; we opted for the top segment, which takes about an hour and is virtually empty at 7:30 in the morning. But no matter where you start or stop, it’s boardwalk …

…. and boardwalk as far as the eye can see: 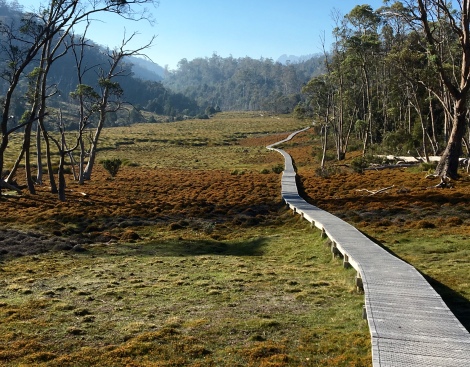 Though this may sound monotonous, it’s anything but. With an easy walking surface, you can really focus on the world around you. And if you choose the southern route, you’ll be rewarded with occasional glimpses of Cradle Mountain off in the distance:

Our most arduous hike at Cradle Mountain was the 6-and-a-half hour Face Track hike, which we did in a circuit with the Lake Rodway Track and a small part of the Overland Track. We started out at the Ronny Creek parking area and walked through another round of misty clouds on the boardwalk that runs down to Dove Lake. 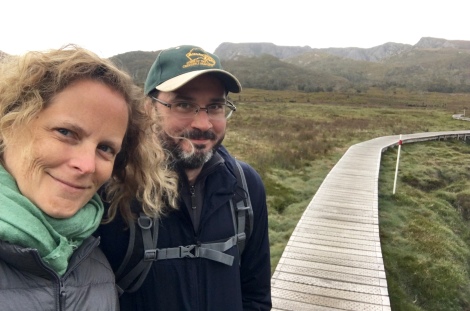 The clouds started to rise a bit higher in the sky once we hit Lake Lilla, but while the visibility began to improve, we found ourselves heading into a relentless wind that blazed straight down at us (Prescott grumpily christened this “face wind”).

Shortly after this, the boardwalk disappeared and our hike started in earnest. By the time we completed the slog up Hanson’s Peak, blue skies began putting in an appearance (though the face wind somehow managed to blow even stronger)…

…. and we also caught our first real look at the entirety of Cradle Mountain. 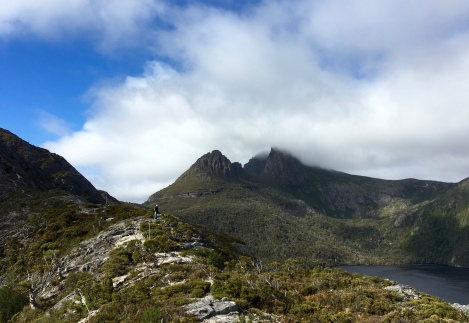 This is when you start to get a real appreciation for the mountain lakes of this region, as you’re looking down on Dove Lake to your right …

… and Lake Hanson to your left:

It’s better to look to the lakes than to look straight ahead, because from this point, the trail is nothing but uphill for a long while (you can see it faintly in this photo on the bottom left):

When we hit the pine trees, we took a forty-minute diversion to the south to see Artist’s Pool (it was recommended by some fellow hikers, and I liked the name). I don’t think we would repeat this effort; it’s a quiet hike and not too difficult, but the end goal — which Prescott dubbed “Artist’s Mud Puddle” — is the very definition of anticlimactic. 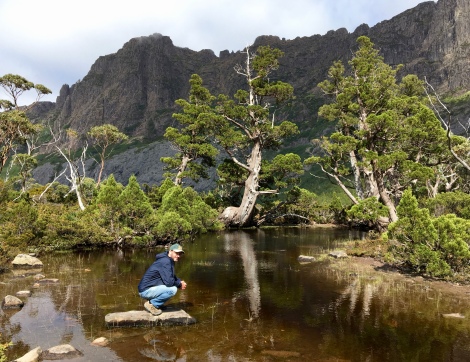 When we returned to the Face Track, we found it challenging and well worth the hard work. This is where our endless views down the length of Dove Lake began:

Eventually the spires of the Cradle Mountain summit came into sight above: 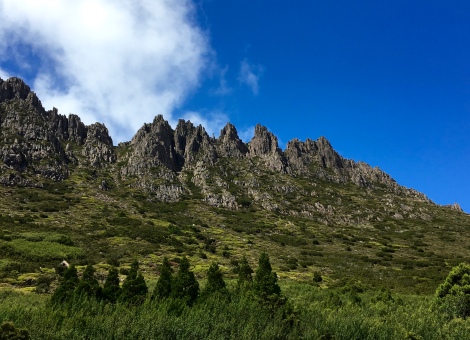 You can climb up to the summit — and plenty of people were going up on this now-sunny day — but we opted out for a variety of reasons (tied for the top were our general exhaustion and my nearly-dead sneakers).

From here we intersected with the massive Overland Track and entered a world of alpine wilderness. We stopped for lunch in the rocks alongside the windy Kitchen Shelter …

… where they’re clearly ready for winter snow on the second floor:

From here we walked through low alpine terrain …

… over the rocks and the occasional boardwalk …

… and down to the spectacular vistas of crowded Marion’s Overlook:

From here, the trail begins to do down, down, down (at one point, with the assistance of ropes):

You pass Lilla Lake once again, and also Wombat Pool … …which someone has amended on every single sign to “Wombat Poo” (this is both hilarious and fairly accurate, given the prevalence of dried droppings along the trail). 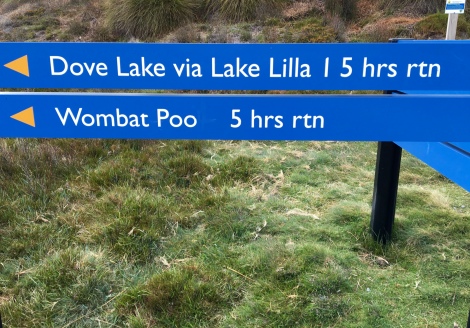 Finally you find yourself back at Dove Lake! 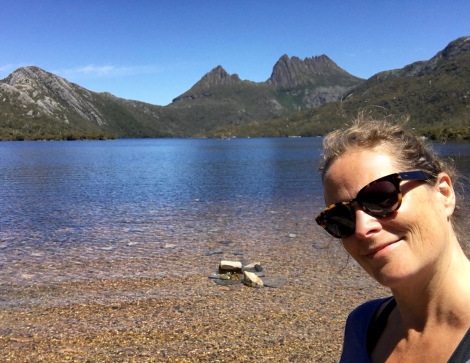 The water here was so refreshing — I didn’t see anyone else wading, but I just couldn’t help it. 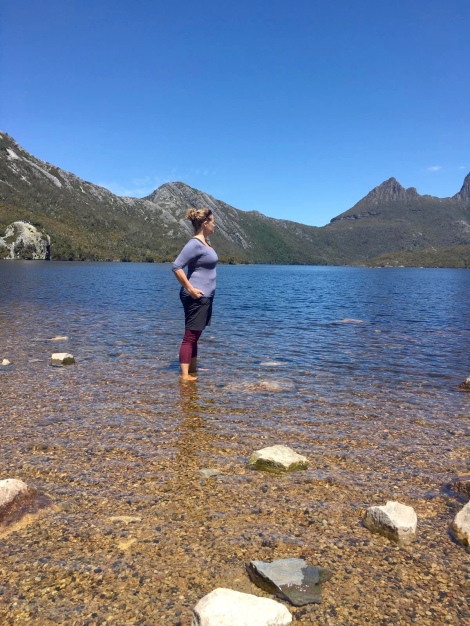 We would happily recommend all three of these hikes, each for different reasons. And we wish we had been able to explore even more!

If you would prefer a much shorter walk, you can amble around Enchanted Walk (it’s paved and handicapped accessible) in under half an hour. They pack a lot of sights — a long creek, buttongrass moorland, beautiful trees — into one short trail.

A slightly more ambitious walk — though it shouldn’t take more than about 10 or 15 minutes — is the quick trip down to Pencil Pine Falls. We went late in the evening, but it was still beautiful. 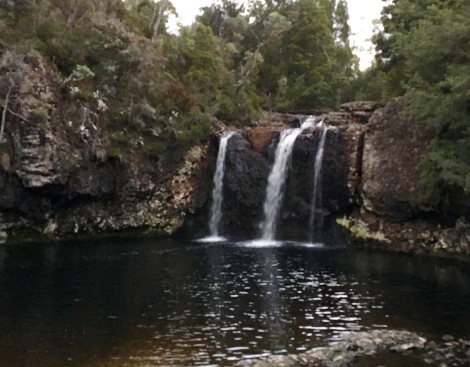 A tip on hikes and walks: if you’re going to do anything serious, I would recommend buying this map rather than relying on the very basic free map they offer at the visitor center:

Even if you don’t have an emergency space blanket, it’s important to know where you’re going!

We packed in our own food for meals in Cradle Mountain, so we can’t speak to the eateries here, but we can speak highly of Cradle Mountain Highlanders for accommodations.

These cabins all have wood or gas fireplaces, are tucked back into the woods, and put us conveniently close to the park entrance. As a bonus, the hosts are fantastically helpful with both hike and wine recommendations!

One response to “Cradle Mountain: 3 Hikes”