Singapore’s Little India is known for its bright colors, vibrant smells, and amazing food. It’s crowded, it’s lively, and it’s a little less tidy than the rest of the island. It’s also full of surprises, including a wide range of murals scattered all over the neighborhood. You can pay these a visit as you shop, eat, and take in the shophouse architecture.

As you emerge from the Little India MRT station, the first mural you’re likely to come across is Cattleland 2:

This one is fun, and it’s hard to argue with a cow on a bicycle.

Indeed, cows make a fairly regular appearance in Little India’s murals. Here’s one peeking out from a painting celebrating an old Tamil bookshop …

… and he appears to be mooing in Tamil:

Another cow — this one quite jaunty — decorates a colorful piece of fabric that is either drying or for sale (I really can’t tell):

… accompanied by an Indian village scene (complete with yet another cow) … 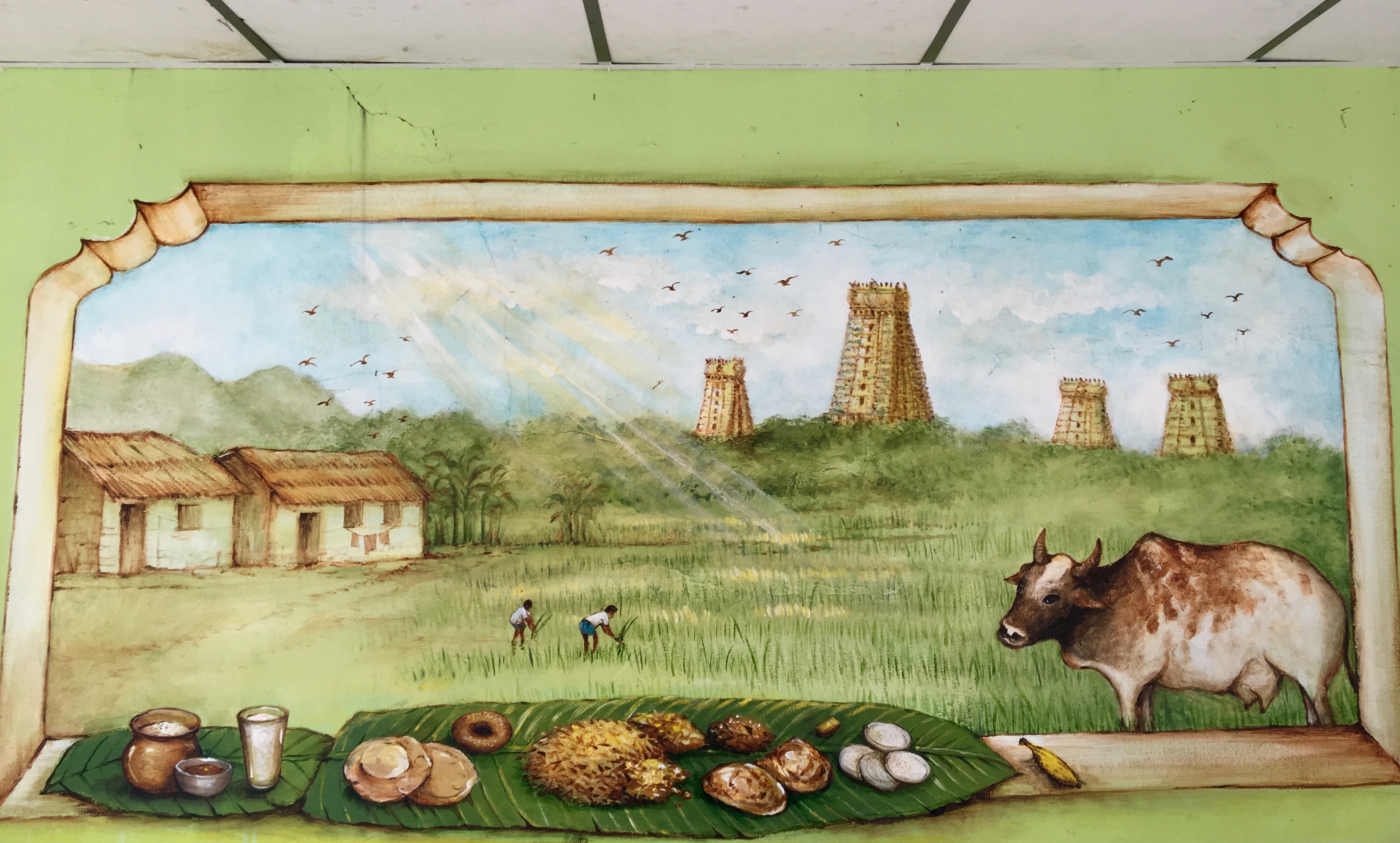 … and a man making prata (one of my favorite local foods):

Traditional Indian trades are celebrated by a nearby mural that represents, among other occupations, washermen …

… garland-makers, and parrot astrologers (this is really a thing in South India; trained parakeets pick up cards that tell your fortune):

There’s a street snack seller, too …

… who perhaps is carrying the same sorts of snacks on his head that you can still buy on the streets of Little India today:

Images of traditional Indian dance are featured in multiple murals …

… including as part of a series on the side of the Tekka Centre (which come to Singapore as a gift from Australia, which explains the cockatoo):

I love the face of this Kathakali dancer:

Another wonderful face is this one in Light in Little India, by Elmac (though I’ve read that he based it not on an Indian man but on someone he met in Miami):

Several murals portray the bustling activity of urban life (which feels appropriate for Little India). One of these explores various forms of transport and the tiffin business …

… while another looks at the question of whether Singapore can keep its historical buildings as its skyline grows taller and more crowded:

There are flowers everywhere in Little India — in garlands, in offerings, in women’s hair — and Singapore artist Speak Cryptic has added this mural, filled with the flowers you would find in a tradition Indian garland or woven into a sari, to the side of a local hotel:

There’s also a mural with an enormous growing jasmine that speaks to the lives of migrant workers who come to Singapore in hopes of higher pay and better lives (an image of a migrant worker is painted at the root of the plant, but that image was blocked by several cooking oil cans and plastic chairs when I walked by):

For a history buffs, there’s A Ride Through Race Course Road — a reference to the race track that used to run right nearby:

Some of the murals in Little India are far less representational. Flavours, by Shah Rizzal, portrays the scents and flavors of Little India in broad swirls of color…

… A Scent of Lights, by SONG, looks at the tradition of burning incense through the very modern art of graffiti …

… and DIFF/FUSION, by Zero, was inspired by the spices of Indian cooking (I’ll admit that I don’t really get this one):

These murals aren’t all easy to find — some are up in the air, others are down narrow alleys, and a few seem to be hiding in plain sight. The best way to find all of the murals is by downloading the LocoMole app and then selecting the Artwalk 2019 @ Little India trail (but note that not everything on this trail is a mural — ignore anything that says “video” or “performance”). For a more condensed mural walk, you can visit this page instead.

As you walk through Little India, you’re bound to stumble on other art as well. I ran into these elephants in a park:

I’m not sure why they were there, but I appreciated their whimsy!

Update from June 2021: I just keep finding more murals in Little India! Several are in the Tekka Centre, which was closed when I first wrote this post:

Then there are others that I found while wandering down a long back alley:

It’s great fun to try to track all of these murals down — and then to go back and find new ones!

One response to “The Murals of Little India”