Being in the beautiful Haa district of Bhutan is one thing …

… but getting there is another. You have two options if you want to make your way to Haa from Thimpu (the capital) or Paro (where the airport is). The easy route is to go over the mountain pass from Paro — but it turns out that in mid-winter, that’s not an option at all (the photo above should give you some indication of why). The alternative is to go the long way, four to five hours from The Confluence or the Chhuzom, the spot where the Paro and Wong rivers meet. The road is windy and narrow and bumpy and often unpaved. Here’s one of our two vans (luggage bundled up on top) trundling toward the mountains:

But there are so many beautiful things about this drive that you might forget the road altogether. If you’re coming from Paro, it’s worth stopping to see Tamchhog Lhakhang, or the Iron Bridge:

This bridge is one of 108 suspension bridges built in the early 1400s by Thangtong Gyalpo, a Tibetan monk who may have been the first person in the world to use heavy iron chains to construct bridges like this one. His work earned him the moniker “The Iron Bridge Lama,” and there is now a small temple dedicated to him and his work at the site (he is always depicted with a chain of iron in his right hand):

The temple includes a set of prayer wheels (with lots of tsa-tsas, mini-stupas left as prayers by visitors) … 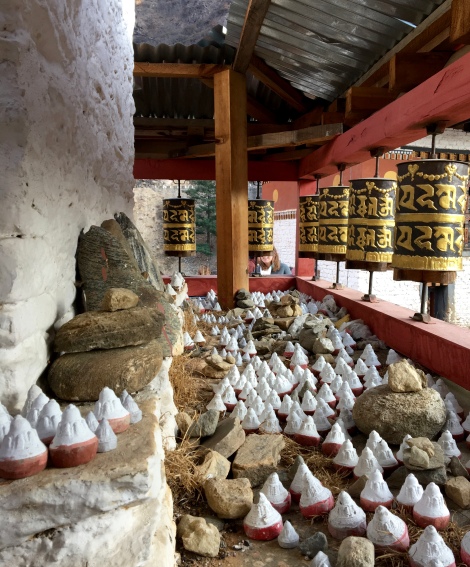 … and a great mandala on the ceiling:

You can’t walk on the iron bridge itself — the metal is too old and in danger of falling apart (many of Thangtong Gyalpo’s bridges have already fallen apart). But there is a wooden pedestrian bridge just a few meters down …

… where you can walk amongst hundreds of waving prayer flags.

And if you want to keep walking, you can go up to this temple above the river:

Once you’re back in the car, you’ll pass The Confluence and start winding your way uphill. This will bring you within sight of Dobji Dzong, which served as Bhutan’s central prison in the late twentieth century:

The building now houses a religious school for monks (who sleep in the old prison cells, which just sounds creepy).

As you keep going up into the pine forests, if you’re lucky, your van driver will see little tufts of white among the trees …

… and you’ll find yourself face to face with a gray langur:

This is probably a Tarai gray langur, a near-threatened species of which they estimate there are only around 10,000 left in the world. Our guide said that seeing them is considered good luck.

You’re far more likely to see little dogs along the road, though they’re far from threatened.

Some of these dogs are kept by families as pets; others are strays who live off of food given to them by monks. Bhutan has been working on a countrywide sterilization program to reduce the number of strays, but fewer than 50% of dogs in rural areas have been spayed or neutered. So you see dogs all over the place.

You’ll also see what I call “pine needle haystacks” along the drive:

These pine needles will be used as mulch or as bedding for animals.

If you stop along the way — and you’ll probably want to, given the length of the drive — you can sit by the side of the road and admire the view: 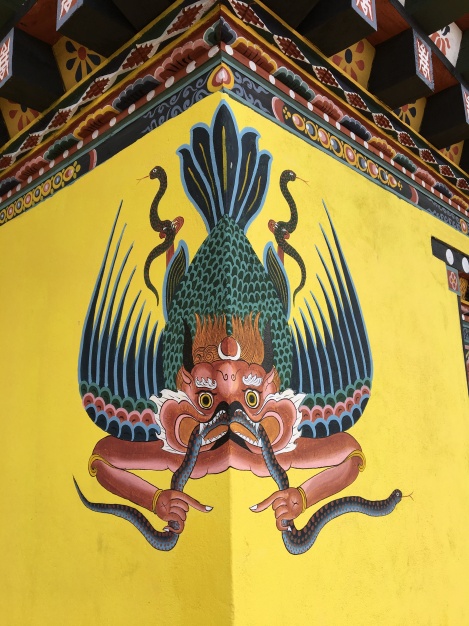 … and that had chilis drying on the windowsill:

Almost every farmer in Bhutan grows and dries chili peppers, which play a featured role in most Bhutanese meals.

Our stop (which involved an outhouse, another staple of Bhutanese farms) was also right next to this chorten: 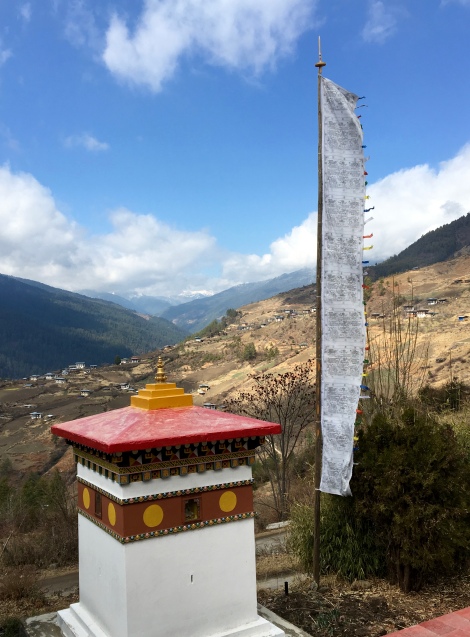 Bhutanese chortens, or stupas (Bhuddist shrines that contain religious relics or writings) are traditionally squat and square-shaped, topped with nearly-flat roofs and circled by a painted red band called a khemar. The yellow circles within the band represent the sun. You can walk around these stupas — always clockwise — to gain merit (I made one circumambulation here, which probably didn’t add too much to my path to enlightenment, but every little bit counts).

You’ll drive by dozens of prayer flags on the road to Haa: 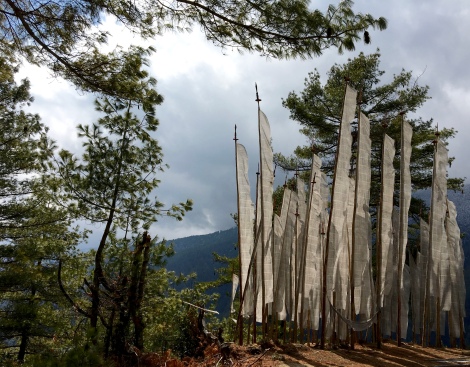 Groupings of white flags, known as manidhar, are raised for the dead, as a way to help them find the path to their next life. 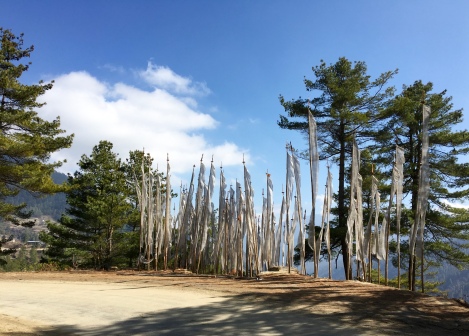 It’s most auspicious if you raise 108 flags somewhere high up in the mountains, with poles made from freshly-cut trees (this has become a problem in a country that has a constitutional mandate to preserve its forests, and the government has restricted the number of poles you can use in some areas).

Prayer flags in Bhutan come in five colors — red, yellow, green blue, and white — to represent the five wisdoms (tathagatas) of Buddhism and the five elements. If you want to learn more about these, Wikipedia has a great chart. Or you can just admire this view outside of our van’s front window (which includes a sticker with a picture of one of the most revered abbots in Bhutan).

… including a few with phalluses on the side (as a protective ward, to bring good luck and drive away evil spirits). 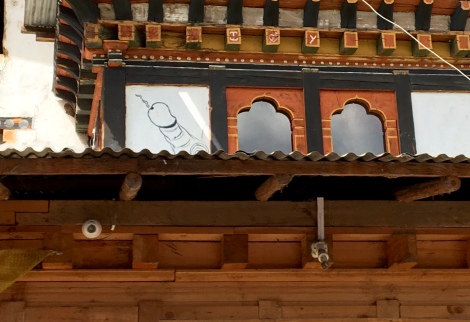 Some of the phalluses even look like they’re flying: 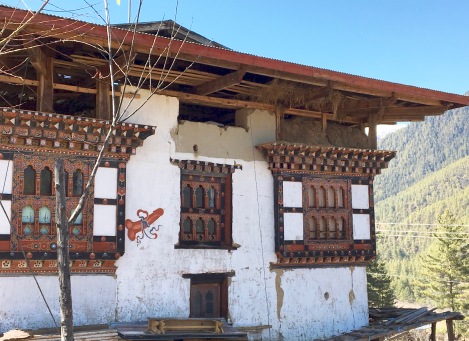 The drive to Haa is almost entirely in the mountains, though you do pass through one large, long valley: 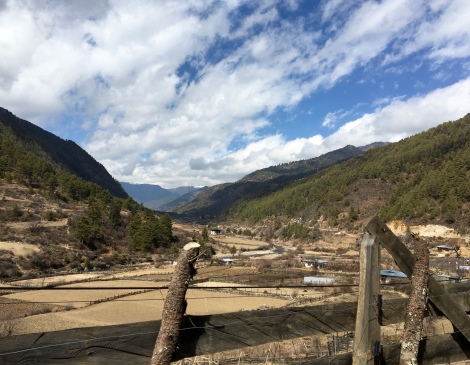 You know you’re really getting into Haa when the snow gets closer:

It’s all quite beautiful, though the road to Haa does raise two concerns. The first is litter — which, while less of a problem than elsewhere in Asia, is still evident in many places:

It’s enough of an issue that there are regular anti-litter signs along the roads (which, curiously, include “urinating or defecating in a public place” on the list of littering fines):

One of our guides suggested that tourists from other Asian countries are responsible for much of the litter, but we saw our van driver toss his Fanta bottle right out of the window — so it’s clear that this is, at least in part, a home-grown problem.

The other thing that you might notice as a blight on the road to Haa are the shanty-towns.

These huts, made of a whatever-you-can-find combination of wood and corrugated metal, house Indian workers who have been brought in for Bhutanese road improvement projects (the road to Haa is undergoing a much-needed widening project). Some even live in tents. These Indian workers, who are both male and female (and usually on the older side), generally earn less than Bhutanese laborers and do not receive Bhutanese government protections. Given the size of this underclass — there are 45,000 Indian workers in the country, and that they make up 18% of the country’s working population — I was surprised to see that their living standards were so low.

My guide assured me that the Indian workers with whom he has spoken are happy living in Bhutan, but I have to wonder how they feel when they see the large, solid homes of the Bhutanese just down the road.