If there’s one big trek that most people do in Bhutan, it’s the hike to Paro Taktsang, commonly known as Tiger’s Nest: 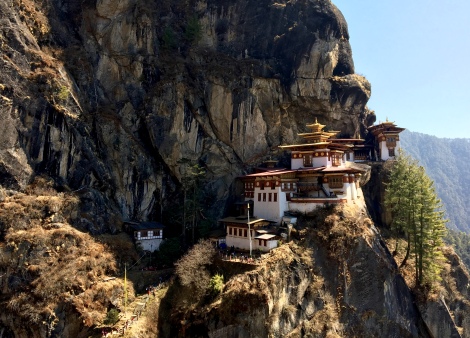 This temple complex, which includes multiple temples and a monastery, is dedicated to Guru Padmasambhava (aka Guru Rimpoche), a Buddhist master from the 8th century. He said to have flown to this spot on the back of his consort, who had turned into a flying tiger for the purpose (hence the name “Tiger’s Nest”). Guru Rimpoche meditated in a cave on this site and eventually introduced Buddhism to country; devotees then built the first temple here in the late 1600s. So the trek to see this cliffside wonder isn’t just for tourists — as a religious site, Tiger’s Nest is so important to the Bhutanese that most will try to hike it at least once in their lives.

There is only one way up to Tiger’s Nest, and that is on foot. And this is a demanding hike. First of all, you’re hiking at altitude; Tiger’s Nest sits at 10,240 feet. And you have an elevation gain from the bottom to the temple complex of about 1,700 feet. You can see Tiger’s Nest up in the hills from the trailhead if you squint:

I went on this trek with eighteen high schoolers from Singapore American School. Before we set out, my co-sponsor, Malissa, warned them: “this hike is no joke.” The hike itself isn’t technical — it’s generally very wide and walkable — but it’s steep and dusty and long. Much of the first half looks like this: 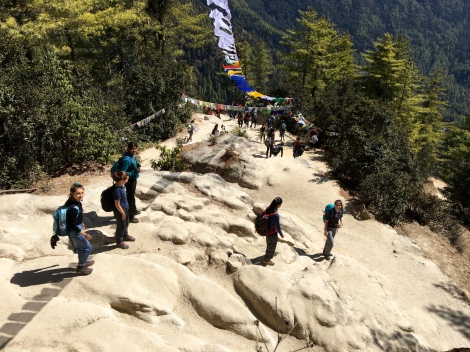 If you have altitude sickness, as Malissa did, or if you’re just not ready to charge up the hill, you can rent a pony for the start of the hike.

But the pony will only take you halfway up, and it won’t take you down at all — once you’ve reached that halfway point, you’re on your own.

Our group started out early in the morning, at about 7:30, which was smart — it’s a good way to avoid the crowds. You spend most of the beginning of the hike walking through blue pine forest. 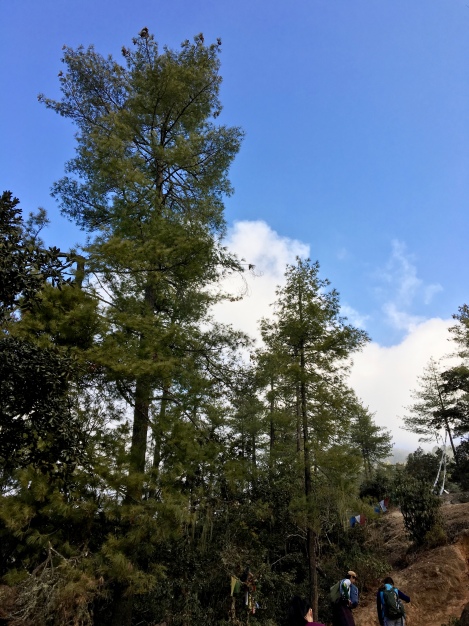 Walking at an extraordinarily slow pace (I brought up the rear of our group of students, not all of whom spend much time at the gym), we reached the halfway point at about 9:30. You’ll know you’ve made it there because you’ll hit a giant prayer wheel …

… and about a thousand prayer flags, stretched from tree to tree everywhere you look:

There’s also a rock where you can stand and feel like you’ve just climbed a much more significant mountain! 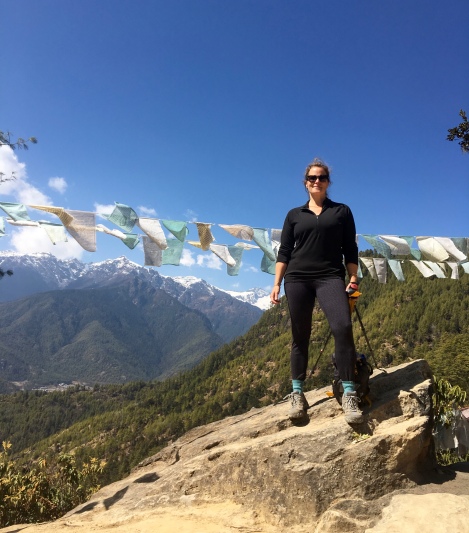 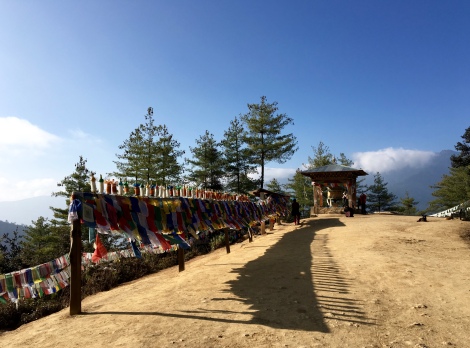 … and Malissa and I did spend a while at this spot: 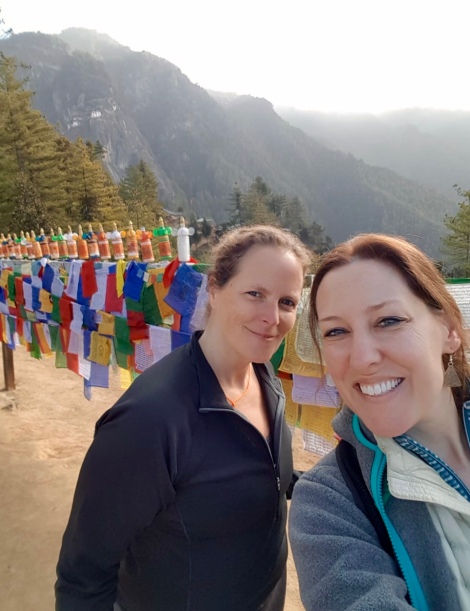 But if you push on a few hundred meters further, you’ll arrive at the Taktsang Cafeteria. This is a great place to sit down, have a cup of hot tea and some crackers, use the restroom, and take in the views. If you sit outside, you can have your first clear view of Tiger’s Nest: 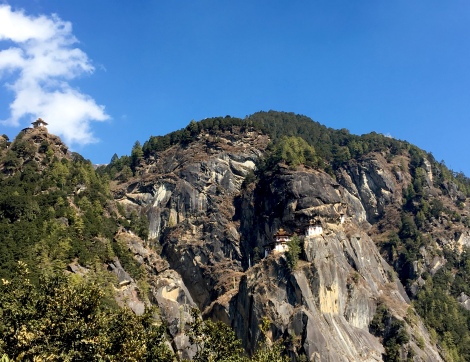 They also keep a butter lamp burning at the cafeteria: 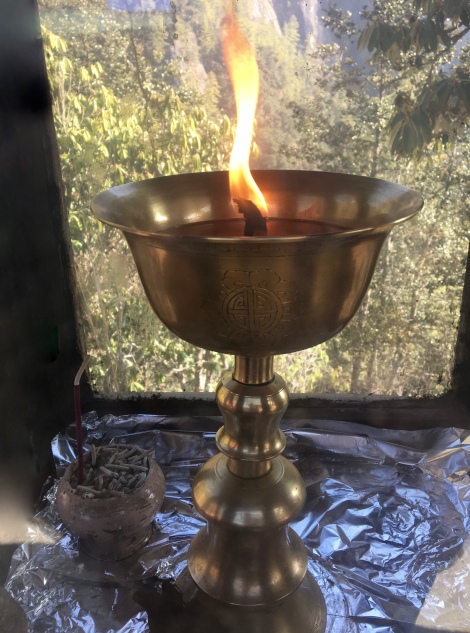 As you keep going up from here, the walk gets easier for a bit; it’s not quite as steep, though the path does get a bit narrower. Signs of hikers’ devotion appear more and more often, including ever more prayer flags in the trees … 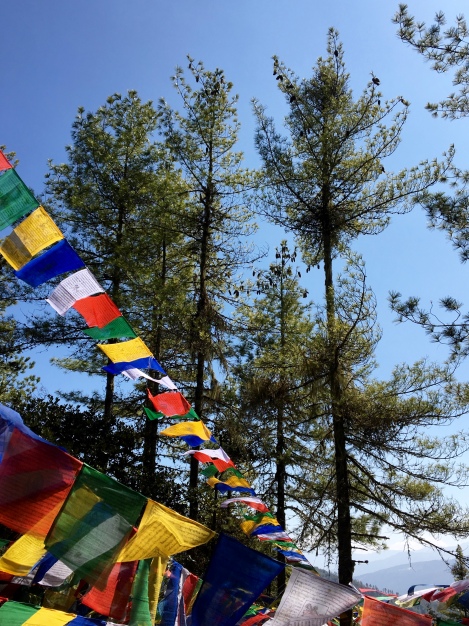 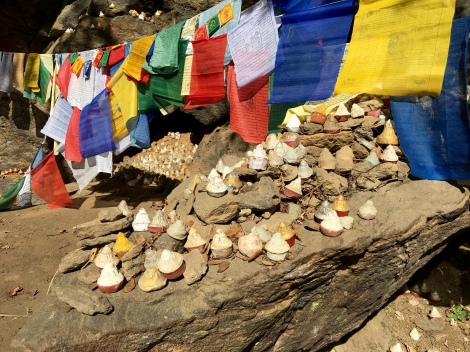 On the nature front, I was extremely excited to catch my first glimpse of a flock of yellow-billed blue magpies — they have wonderfully long tails. But my iPhone does not take good bird pictures, so you’ll have to work hard to make out the magpie in the lower lefthand quadrant of this shot: 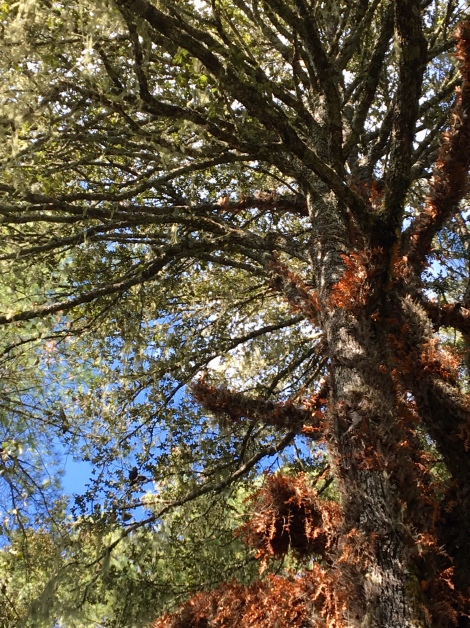 About three-quarters of the way to the top, you start getting great views of Tiger’s Nest.

You also start going up and down hundreds of stairs (mostly down for a long time), which follow switchbacks along the hillsides:

From here, you can see all the way back down the valley to the town of Paro: 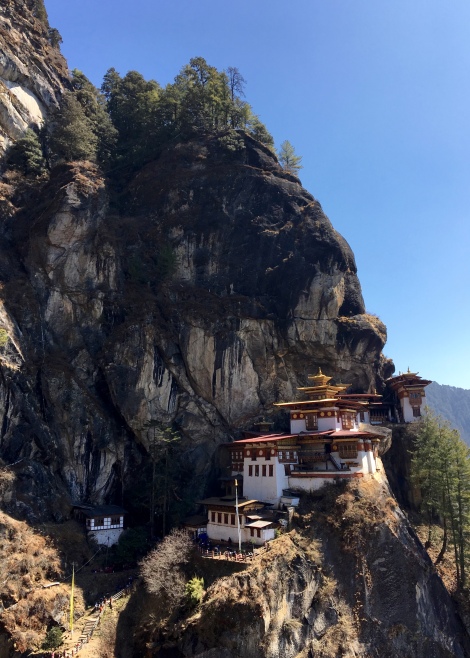 … of yourself with Tiger’s Nest …

… of the adults on your school trip with Tiger’s Nest …

With Malissa and Pasa & Rabten from Bhutan Tours & Travels

… and of your entire school group with Tiger’s Nest:

Note: if you start out early in the morning, wait and take your pictures at this spot on your way back down, after you’ve visited the temple. The morning sun makes photos here on the way up pretty awful.

From the photo area, there are more stairs that take you down to this stupa … 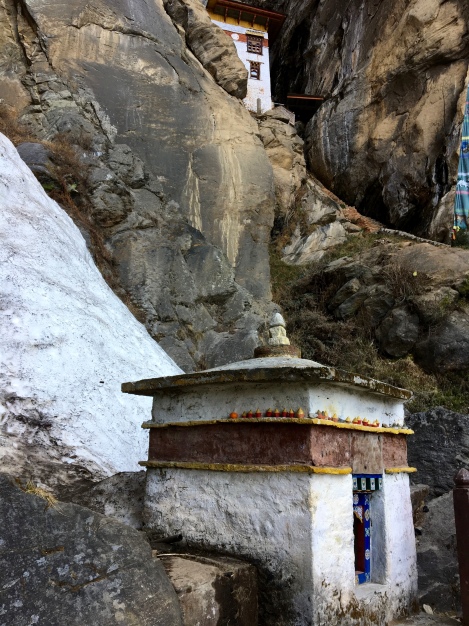 … which has a water prayer wheel inside …

… because it’s at the base of this waterfall!

At this point in the hike, you’re almost done; it’s just a hundred or so steps uphill to your final destination, from which you’ll have a great view back down to the waterfall and the snowbank … 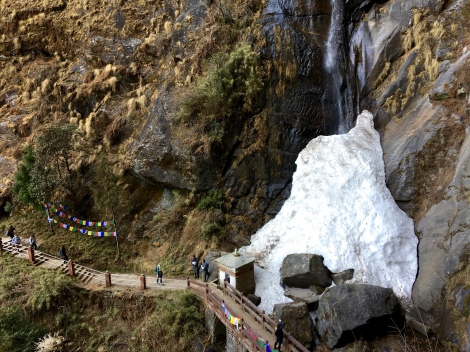 … and across the cliffs toward a mini-temple (I think) tucked into the rocks:

Once you’re here, you’ve reached Tiger’s Nest! Here’s our guide Pasa, who somehow got out on a roof ledge:

But once you’ve made it to the temple’s entrance, you’ll have to give up your phone and any other electronics (they have lockers); there are no photos allowed inside. The monks, on the other hand, do have cell phone access (my guide tells me that they spend a lot of time on Facebook and WeChat):

It’s a shame that you can’t take pictures, because this place is amazing. We toured multiple temples and learned about the many paintings, statues, and offerings within (Bhutanese Buddhism is far to complex to explain here — not that I could do the job — suffice to say that there are many incarnations of the Buddha and other deities, often in technicolor). Because we were visiting with a school group (and perhaps because one of our guides had attended school with one of the monks), we concluded our visit with cups of tea in the VIP room.

Our guides also told us about the Tiger’s Nest fire of 1998, which destroyed a significant portion of the monastery (rebuilding efforts were completed in 2005). This means that there are now at least four fire extinguishers hanging outside of the room where you can leave an offering and light a butter lamp. I highly recommend bringing in some money for making an offering; it’s a very special experience, no matter your religious affiliation.

The hike back down isn’t especially difficult; it just feels long. But I was excited to get to the bottom and find this wild primrose — there aren’t may flowers blooming in February!

This hike takes the better part of a day; I would say that we did it in just under six hours. You could easily do it in four hours (less, even) if you were in good shape and just going for the hike, but I would recommend taking it easy just to have the experience of being here and taking it all in.

2 responses to “Hiking to Tiger’s Nest”