My mother, cousin and paid a visit to Yogyakarta, a city on the Indonesian island of Java — and I’m ready to go right back! It’s a wonderful place with so much to do and see (and 48 hours was not enough time to give the city its due). But here’s a quick run-down of our highlights during that time:

1. The largest Buddhist temple in the world: Borobudur 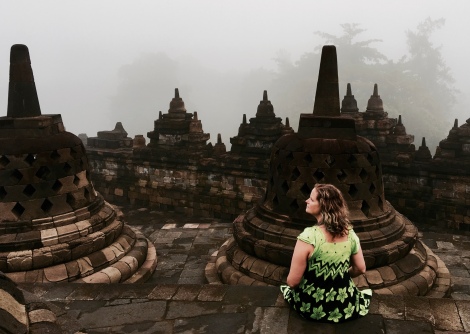 … and it’s so big that I could barely fit it into one picture.

Just an hour outside of Yogyakarta (or Yogya, as it is more affectionately known), Borobudur alone would make venturing to this part of the world worth the trip.

With temples featuring Shiva, Brahma, Vishnu, and a host of other characters …

… Prambanan is like a smaller, slightly earlier version of Angkor Wat — and it’s much easier to get to than central Cambodia. 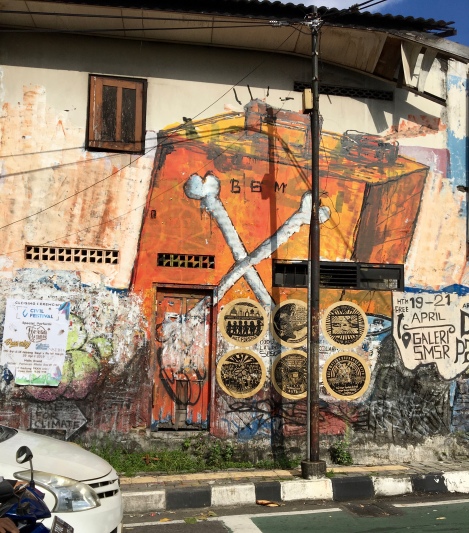 Yogya has more — and more interesting — street art than anyplace I’ve been in Southeast Asia.

I loved the variety and the quality; if we’d had more time, I would have set aside a couple of hours to do a street art tour rather than just taking pictures out of the window of our van. 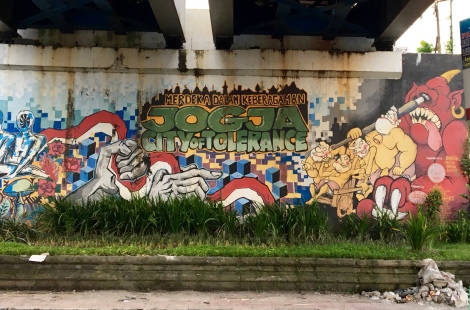 But just looking out from the car was really satisfying — there’s great variety and vitality everywhere you look. 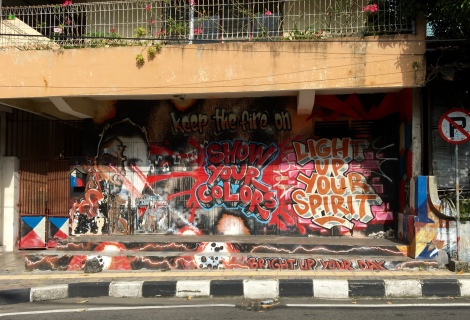 While Mount Merapi is a great reason to visit Yogyakarta, it is also a reason to stay away — Merapi is an active volcano that has done tremendous damage over the years (it is, in fact, the most active volcano in all of Indonesia, a country that sits right along the Pacific Ring of Fire). You can still see smoke rising out of the top.

Merapi is so potentially problematic that it has been selected as one of sixteen “decade volcanoes” around the world, chosen for special scientific study due to its destructive quality and proximity to lots of human habitation. To give you some extent of this mountain’s volatility, it has most recently erupted in 2006, 2010, and 2018. You can still see a vast lava field from 2006. 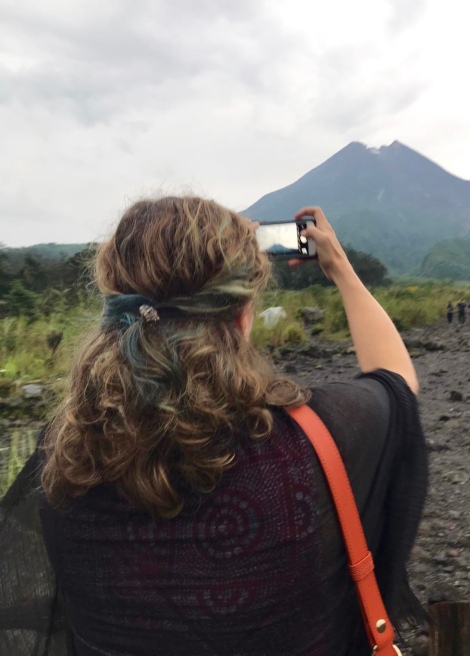 Newspapers were warning as recently as January that Mt. Merapi could erupt again at any time — but until then, you can have a lot of fun taking a jeep tour over its slopes!

A jeep tour is very touristy and wonderfully entertaining (especially if you try to do most of it standing up — and then attempt to operate a camera at the same time).

… and visit the Batu Alien, a large rock carried downhill by the 2010 eruption that looks like the head of a man:

Mt. Merapi was so extraordinary in the late afternoon in the misty rain that I can only imagine how amazing it would be to see it on a sunny day!

Java is famous for its batik, a means of dying cloth using an ages-old wax-resist technique. 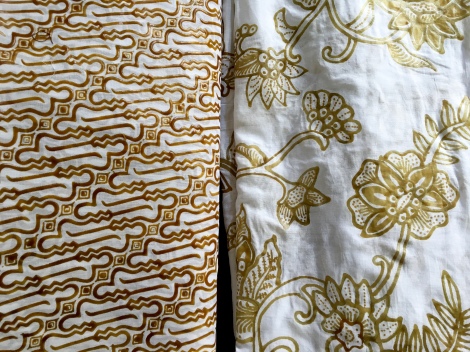 In Yogyakarta, there are still a few places where you can watch batik being made by hand.

This an extremely labor-intensive process. The most intricate form of making batik involves applying hot wax using a small metal tool that looks like a pen … 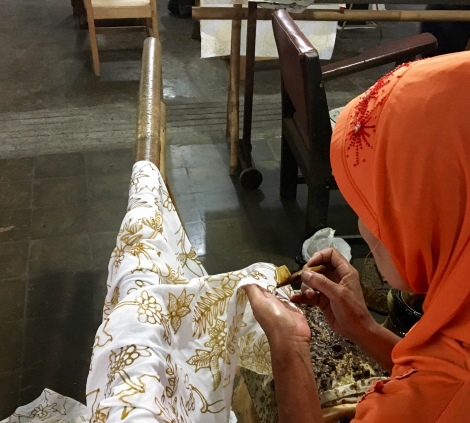 … and then painting colors inside of the lines before the rest of the fabric is dyed: 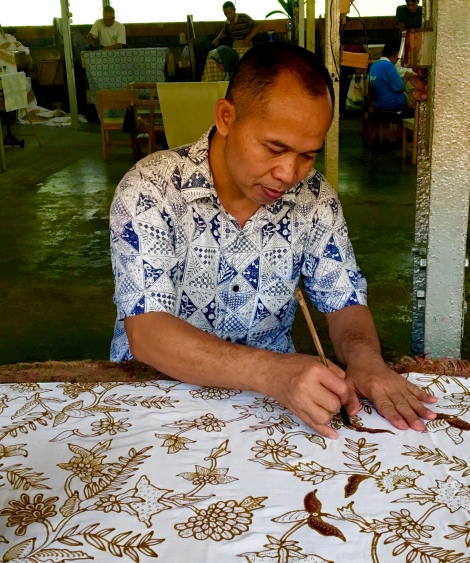 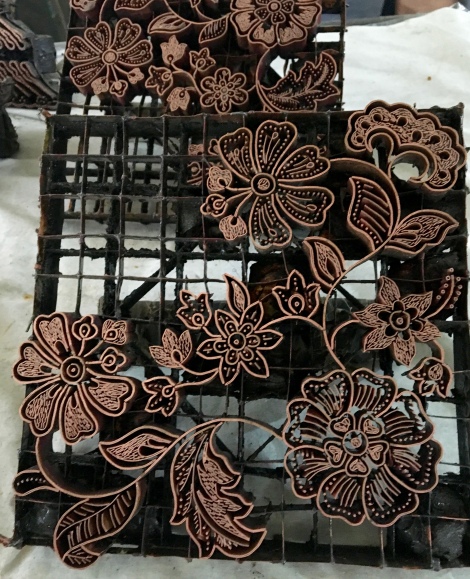 … dipping it carefully in hot wax, and then pressing it down on the cloth to create a pattern … 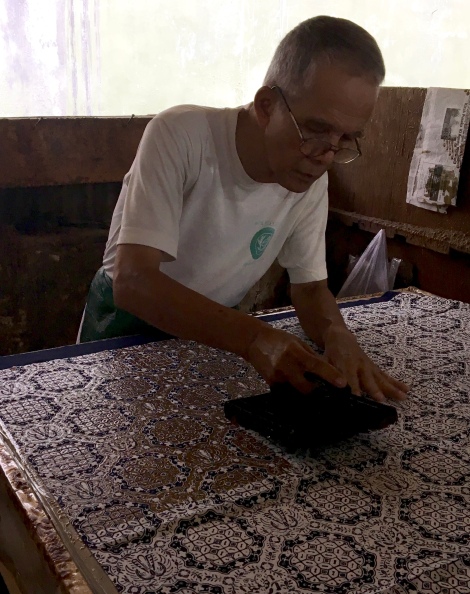 … with multiple layers added if desired.

After all of this, the fabric is dyed (coloring everything but the cloth that’s under the wax) ..

… and the cloth is finally hung to dry. 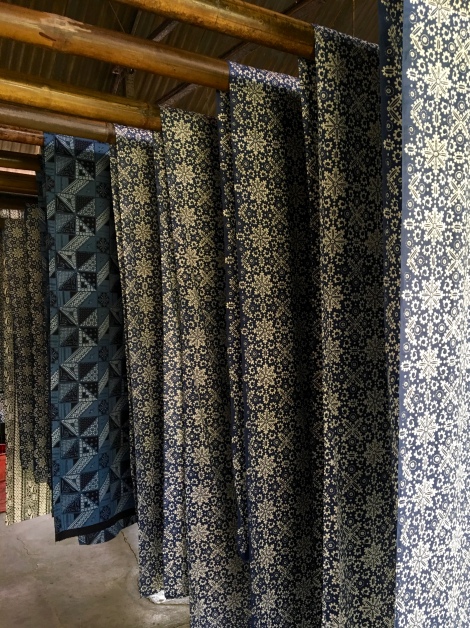 A note to prospective buyers: If you want to purchase batik made by hand, you’ll need to be willing to pay for it (and if you’re used to items being cheap in Indonesia, you’ll definitely be hit with sticker shock). But it’s worth the cost if you want something special. Of course, if you want cheap “batik” of all kinds that’s been made by machine, you can find it aplenty in the markets.

Yogyakarta itself is a small city, with a population of only 388,000. It feels low to the ground, with short buildings that drape themselves over river valleys. From the third floor of my room at the Phoenix Hotel, I had a clear view all the way north to Mt. Merapi, over 25 kilometers away. 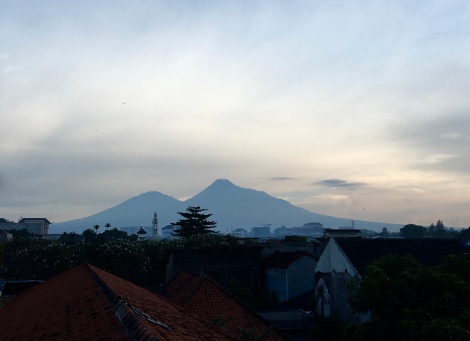 The main city streets aren’t much to look at if you’re driving by in a car — but veer off onto the side streets and alleys on foot, and it’s like you’ve stepped into an entirely different world. 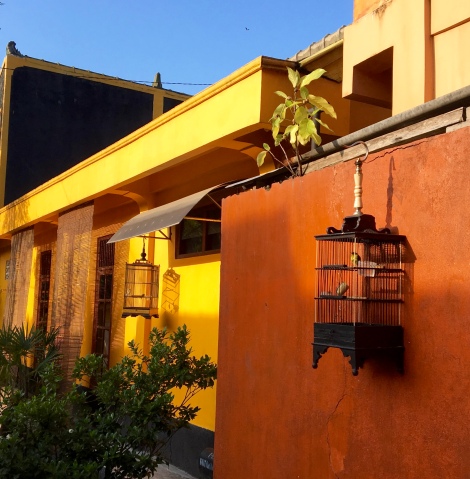 … and steep motorcycle ramps and stairs … 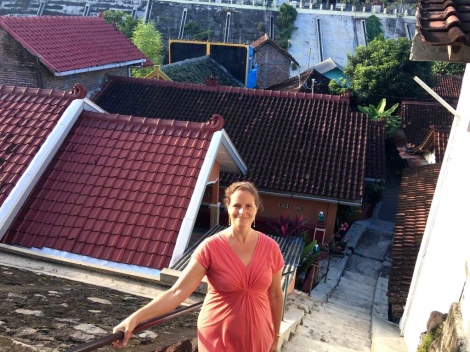 … that led us down to one of the rivers that criss-cross the city. 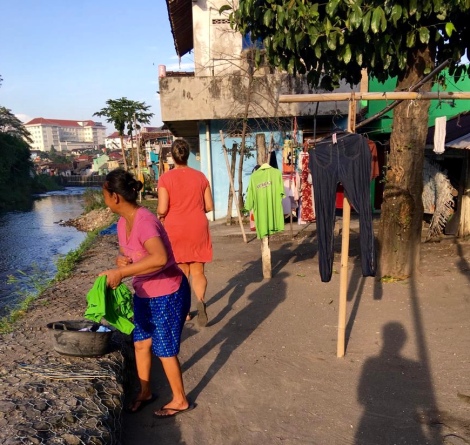 This was all of five minutes away from our hotel, but we felt like we’d stepped into another world entirely! 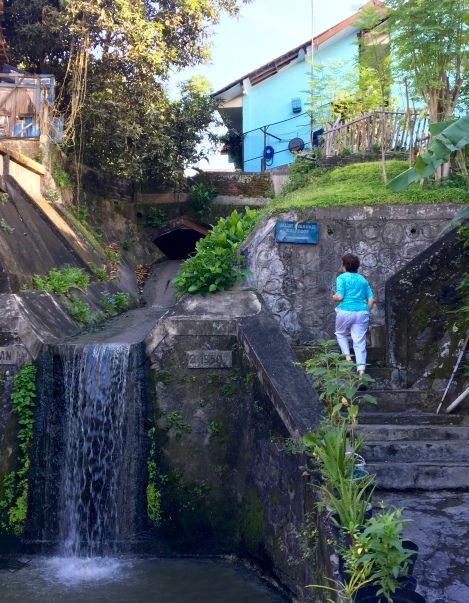 There are also busy market streets where you can buy all sorts of street food and snacks. 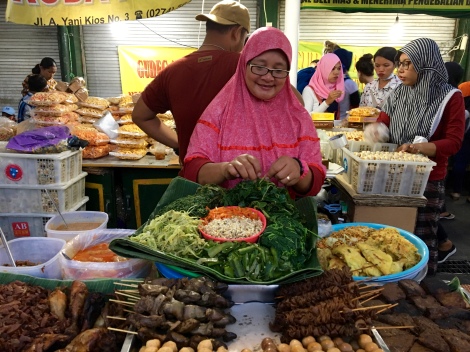 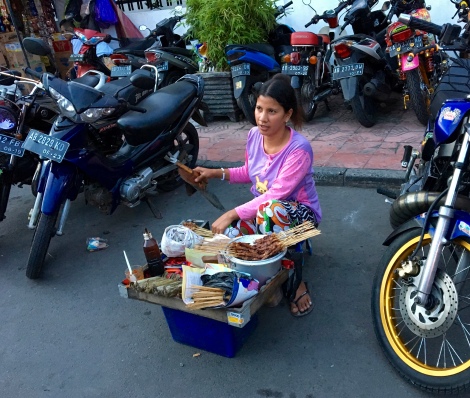 7. The Horse Dance, or Kuda Lumping

One of the many traditional dances of Java is kuda lumping, which features men riding decorated “horses.”

We saw this performance at the suburban branch of a restaurant called The Waoreng of Raminten, at what I would have thought was a tourist show but for the facts that (1) we were the only foreigners in the audience and (2) there was a lot of chatter entirely in Bahasa in between the acts. In addition to kuda lumping, the dances also included this one, which appeared to combine traditional imagery with contemporary music …

The whole audience was invited up to do a line dance at the end of the show. It was a great way to spend a Saturday night! 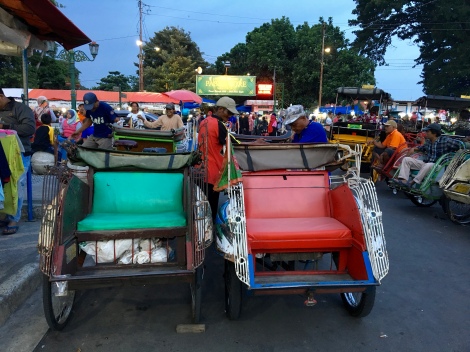 You can certainly get around Yogyakarta on foot or in a car, and there are scooters galore …

… but other options include open-air carriages propelled either by scooters … 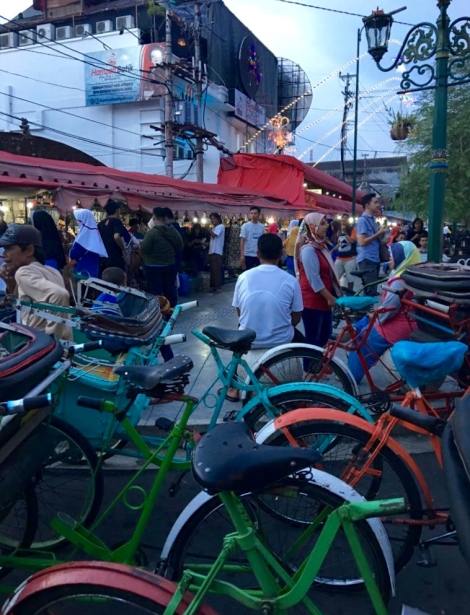 These contraptions are strangely beautiful.

If you want something a little fancier, you can always hire a horse and carriage — these remain surprisingly popular, especially for people wanting to cruise up and down the main market street on a busy Sunday night. 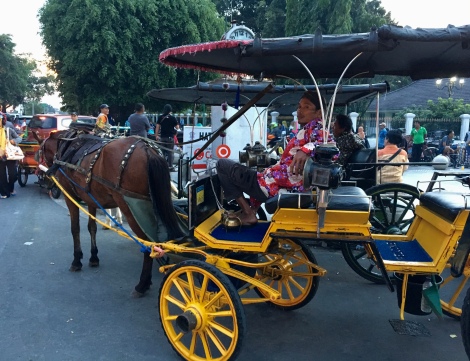 At the foot of Mt. Merapi sits the Ullen Sentalu Museum, a space meant to showcase Javanese arts and culture.

As museums go, this one is a little odd: you cannot take photographs (except in one designated photo spot), and you can only go as part of a guided tour. The space is fantastically eclectic — just contrast the entrance building, above, with the exit area: 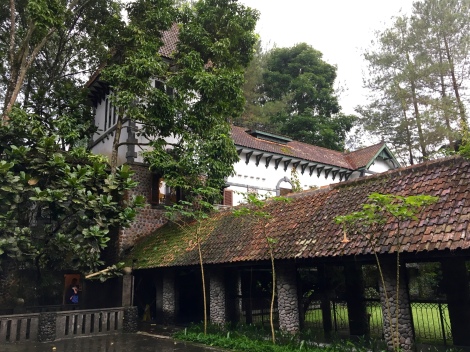 Our entrance ticket said, “this museum provides multifaceted venues in inspiring a romantic nuance and discovering the hidden treasures inside an encyclopedia of ancient virtues.” I have no idea what that means. But I do know that the purpose of the museum felt a bit scattered; the collection includes a mix of gamelan instruments and batik, old photographs and family letters, portraits and statues. There seemed to be some desire to mix the traditional with the new, as with this Borobudur-inspired relief set catawumpus into concrete posts:

But we loved our guide, we loved the outdoor spaces …

… and while smiling bemusedly at the museum’s oddities, we had a great time.

Oh, and the museum is just up the street from this roadside lobster statue — what’s not to love about that? 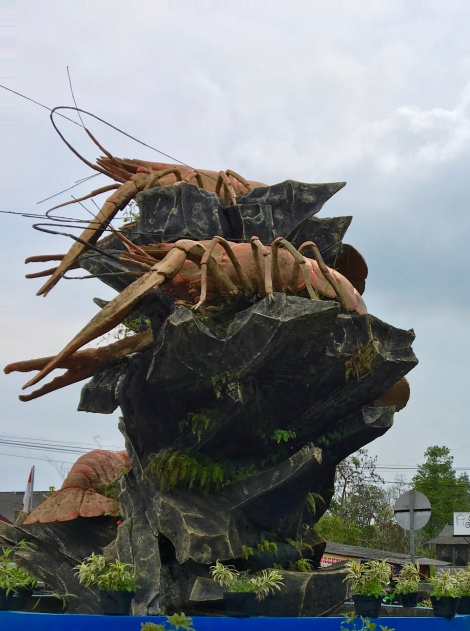 If the city starts to feel overwhelming, it is easy enough to drive just twenty minutes and be out in the rice paddies …

… or to sit and have lunch by a rushing river. 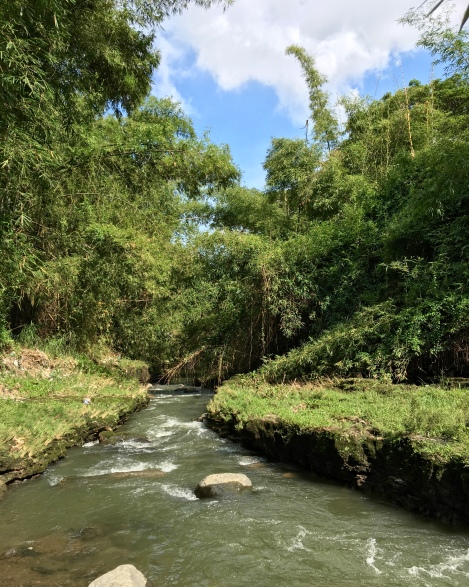 Yogyakarta is small enough that you can access the countryside easily — and you can even find it with ancient temples in the background (here, we’re just outside of Prambanan):