Henry David Thoreau put Walden Pond on the map by spending two years, two months, and two days living in a self-constructed cabin on its shores. He famously said of this mission: 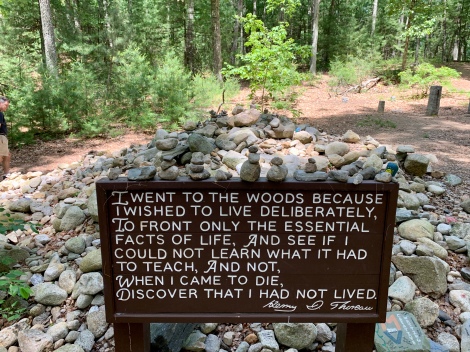 What he did not say was that he would still ask his mother to do his laundry when he went into the woods, but that is a fact that he does not appear to have wanted to have advertised. He saw this as a time of personal solitude and reflection, of observation and quiet thoughtfulness. His daily journals while he lived at Walden were eventually revised and published in 1854 as Walden; or, Life in the Woods, and they have inspired generations of homesteaders, naturalists, and survivalists ever since.

Things were only mildly rugged when Thoreau hiked the mile and a half from Concord, Massachusetts, to Walden in the mid-1840s; today, the whole place is downright civilized. Walden Pond has been turned into a State Reservation, and they’ve put up a fancy new visitor center … 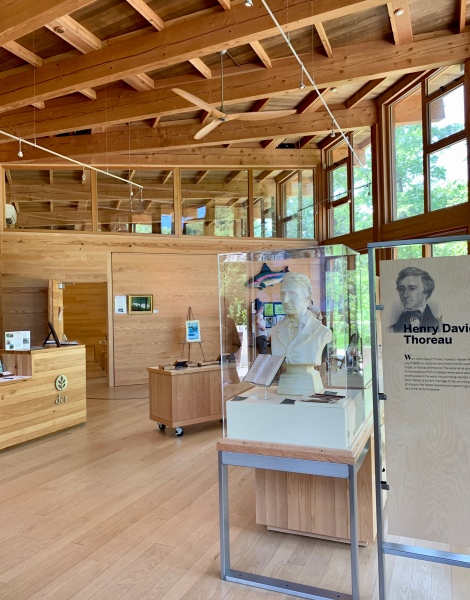 … where you can learn a little bit about Thoreau’s life in the woods, watch a video about his legacy of civil disobedience, and see this cool tree section (the tree started out life in 1837, at the same time that Thoreau was graduating from Harvard; it was cut down in 2015 make room for the visitor center):

The visitor center does note that Thoreau did not spend all of his time at Walden in solitude — he had friends over for socializing and sometimes walked back to Concord to see people — but it fails to make mention of his mother doing his laundry. I found that disappointing.

Just a few dozen yards away, you can visit a reconstruction of the cabin that Thoreau built for his life of contemplation. 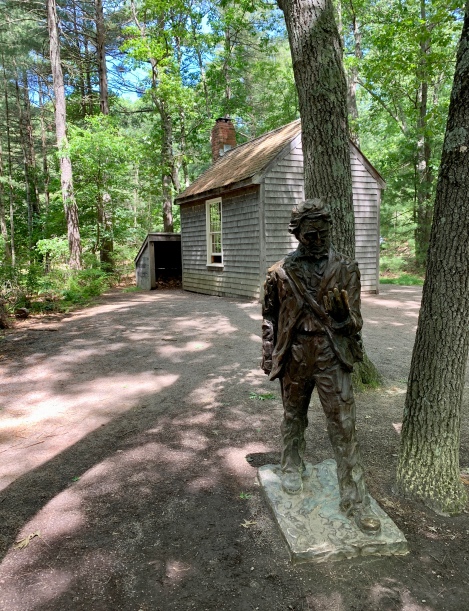 Thoreau built his cabin out of recycled materials and wood that he cut himself, and he kept meticulous track of his expenditures (“Boards: $8.03 1/2, mostly old shanty boards … Two casks of lime: $2.40, that was high … Two second-hand windows with glass: $2.43 … Transportation: $1.40, I carried a good part on my back”). He built the whole thing for $28.12 1/2 on a friend’s land, which made the whole thing a tremendous bargain. The one-room shack was simple and bare-bones…

… though I have no idea how authentic they were in reconstructing it (Thoreau indicated that he included a closet in his building project; I saw no closet here).

Walden Pond itself, placid and crystal-clear, sits across the road from all of this. 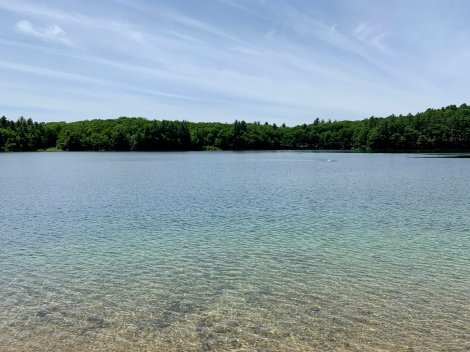 This is a “kettle pond,” formed approximately 12,000-17,000 years ago when large blocks of ice, left behind by the glaciers, melted and left deep gaps in the soil. At 102 feet deep, it is one of the deepest bodies of water in Massachusetts — and Thoreau himself was the first one to survey it and measure that depth.

You can take a confusing zig-zag of trails along the water’s edge to the original site of Thoreau’s cabin (his cabin was sold after he abandoned it in 1847, and it took the digging of an amateur archaeologist to find its original location in 1945):

The only drawback to walking out to the cabin site is that much of the easy hike by the lakeside runs along a fairly ugly wire fence (erected, I believe, to prevent erosion). Still, it’s easy to look past the fencing to admire the woods, the pond, the chipmunks running around, and the many birds overhead. There were also police horses walking the trail! 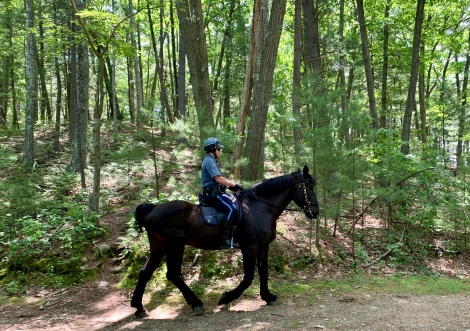 The one thing that I did not expect (but adored) at Walden was a set of beaches. There are multiple roped-off swimming areas, lifeguard chairs, and a large building with changing rooms.

Walden is a lovely place to swim because no motorised boats are allowed — so you might see a kayak or a paddle board, but you can swim in relative peace. And they allow deep-water swimming; as long as you wade in away from the ropes, you can swim as far out into the lake as you like (and many people do; it looks to be a popular area for distance swimmers and people training for races). 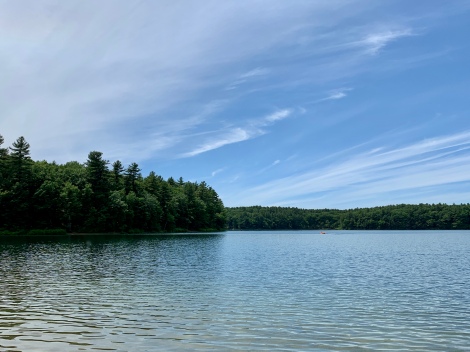 I loved Walden! I imagine that it gets crazy in the summer; it was already pretty crowded on a Wednesday in June when it was only in the mid-70s. But for a stroll or a beach where you can really feel like you’re getting away from the madness of Boston, it’s just wonderful. And there’s something special about seeing the place where the powerful American ethos of self-reliance in the woods all began.

One response to “On Walden Pond”