The landscape of the triangle at the tip of southern Ontario looks an awful lot like Iowa if you watch it flick by from the highway. But get off onto the back roads and you’ll find water features galore, many of them vying for space aside the long neck of the Niagara Escarpment. Niagara Falls itself is the best known of these, but over 100 waterfalls crash down through the forests that are tucked in among the long stretches of farmland.

This is Webster’s Falls, a “classical plunge” waterfall that is 22 meters high and 30 meters wide. It is maddeningly hard to see; the kind caretakers of the Spencer Gorge Wilderness Area have run a long, black iron fence pretty much everywhere around the falls, and you can’t access the 10,000-year-old gorge at all. So unless you climb up on a wall (which the park folks would probably discourage, but I found pretty satisfying), you end up with a view that’s half waterfall, half shrubbery: 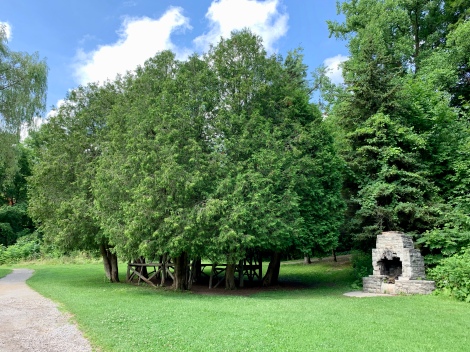 … which might include a very brief stroll on the cobblestone bridge that runs over Spencer’s Creek:

This bridge, built in 1933, has recently been renovated by the local Optimist Club. I love that something called the “Optimist Club” continues to exist; I know that this is an international organization, but somehow it sounds so appropriately Canadian.

A short walk or an even shorter car ride will take you to Tew Falls, a 41-meter “ribbon overhang” waterfall:

These falls have an excellent viewing platform; from here, you can get a much better sense of scale and a view of the dolostone, limestone, shale, and sandstone layers that make up the escarpment stratigraphy.

These falls are really lovely.

From Tews Falls, most people will take the forty minute hike up the wide, well-trodden, and mostly gentle path …

… past all sorts of interesting flora … 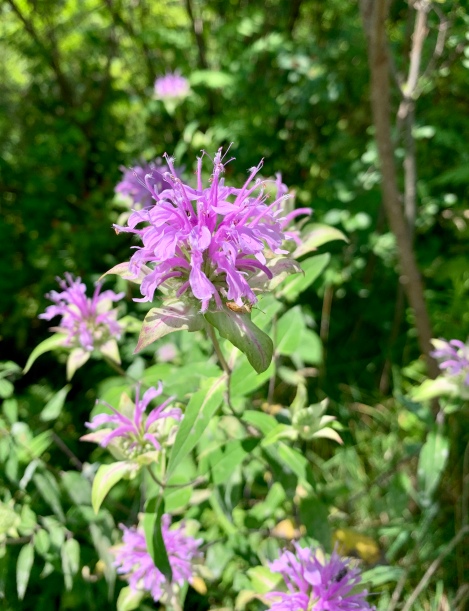 This rocky overlook offers great views of the town of Hamilton …

… and the surrounding area: 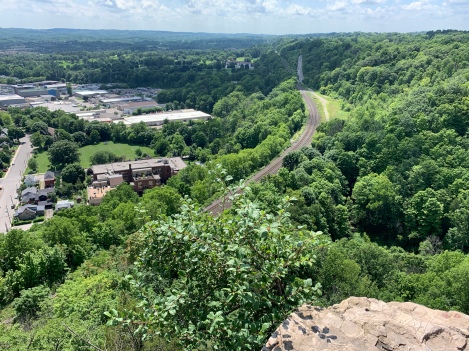 Drive northeast for half an hour, and you’ll end up in the small town of Cambridge. Here you’ll find the Grand River, the largest river entirely within southern Ontario’s boundaries (it’s a small claim to fame, but it’s something):

… and if you’re out late on a summer’s evening, you might get a beautiful sunset: 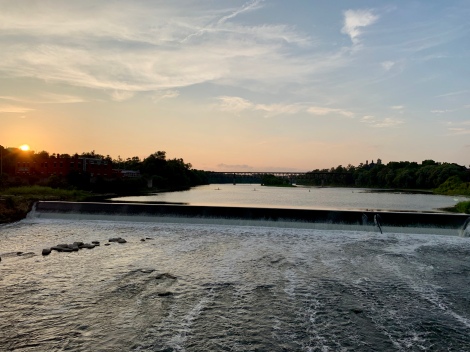 Should you happen to be in Cambridge, I would recommend lunch at the Cambridge Mill, where I had an excellent (not too sweet) passionfruit sour alongside a deliciously vinegary white and green asparagus salad.

Another wildly popular eating venue in the area is the Old Marina, where you can have huge portions of mediocre food on the banks of Puslinch Lake. While dinner might not be anything to write home about, the views are stellar …

… and if you squint, you can see Justin Bieber’s lake mansion across the water (trust me — it’s there).

Much more interesting to me was my first look at an amphibious vehicle — I watched the boat on the lower right drive straight into the lake from the sandy shore:

But my favorite lake experiences were those at the no-name, no-motorized-boats lake at the end of Mill Creek in Cambridge:

This lake was formed when the creek was dammed decades ago, and I could walk right down to it from my Airbnb! This meant that I could swim both during the heat of the day and as the sun was going down.

A short walk along the edge of the lake led me to the Shade’s Mills Conservation Area, which has a sandy beach, canoe rentals, and easy trails through the marshy woods. I went for one hike in the park, but they put ALL of the mosquitoes in Canada here, so I moved quickly and kept the trip short.

A far preferable option was putting on DEET (which is awful, but solves the problem), settling in with a good book, and watching the sun set over the lake. 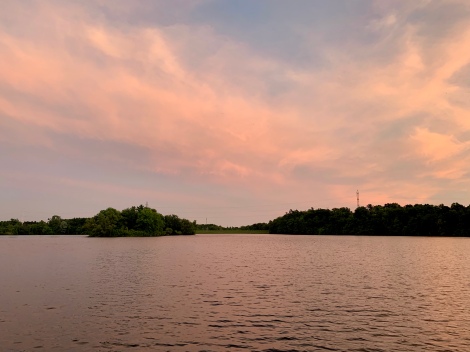 One response to “Waterfalls, Lakes, & A River”