I travelled to Washington, DC, last week, which gave me the chance to make a few college visits in Virginia. While I was in the neighborhood, I also wandered over to the National Zoo. Here’s what I found in my adventures. 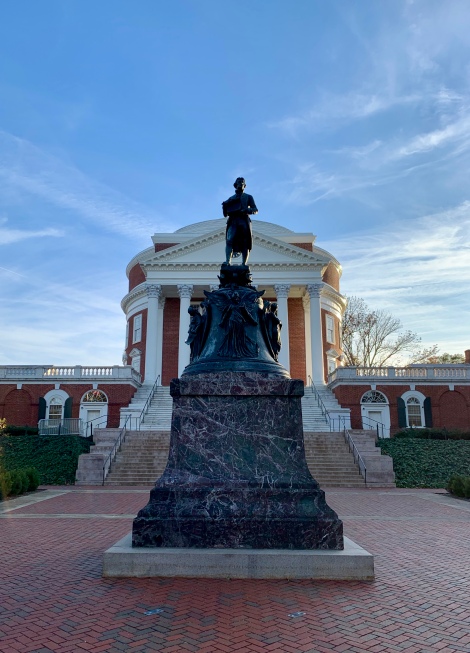 Thomas Jefferson founded the University of Virginia in 1819, and he designed all of the oldest buildings on its campus. The most monumental of these is the Rotunda, inspired by the Pantheon in Rome: 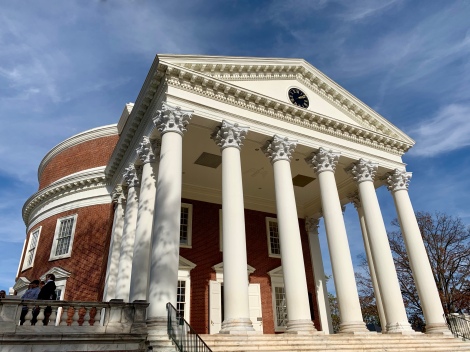 This central structure, meant to represent the “authority of nature and power of reason,” housed the university’s original library — which meant that books and study were the focal point of the campus. Jefferson wanted to redesign the traditional college experience, making it a true learning community. So he set the Rotunda at the head of a large rectangular lawn, along which were set small fifty-four student rooms …

… and sixteen “pavilions” where professors could teach classes downstairs and live just above:

It’s a beautiful space, especially if you like neoclassical Architecture (my colleague observed that columns are as abundant here as fall leaves). There’s a reason that this campus, along with Jefferson’s home, Monticello, has been named a UNESCO World Heritage site.

This chapel, built in the late 1800s, comes as something of a surprise — Jefferson intentionally designed UVA without any religious buildings, so it’s unclear how this one ended up just a stone’s throw from the Rotunda. Squabbles over purpose aside, this is a wonderful space. Most of the stained stained glass windows were designed by J. R. Lamb & Sons …

… but the small “mandorla” (pointed oval) window at the peak of the east transept, dedicated to the memory of Eugenie Moore Faulkner, was designed by Tiffany Studios:

My friend was married here nearly twenty years ago, and it’s a lovely place for a wedding. 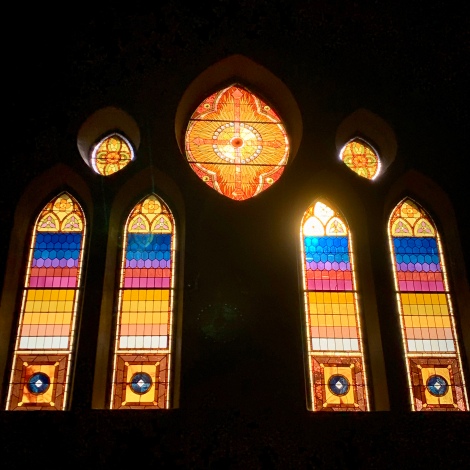 Two female figures, Dike (goddess of justice) and Eunomia (goddess of moral law), adorn the entryway of what was once the UVA Law School. Painted by Allan Cox in the early 1930s, the large murals feature Moses delivering the tablets … 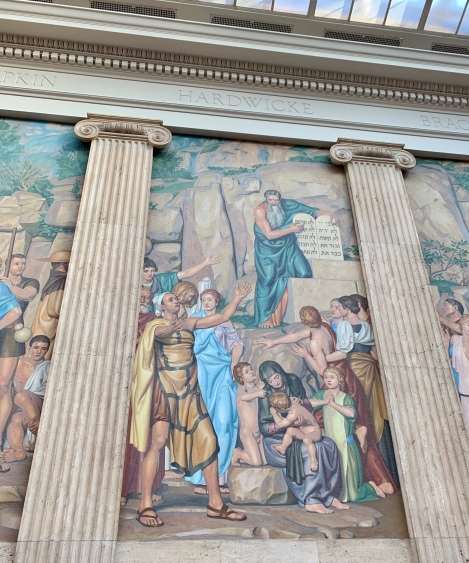 … and a depiction from the Iliad of a trial over the blood-price of a man who has been killed: 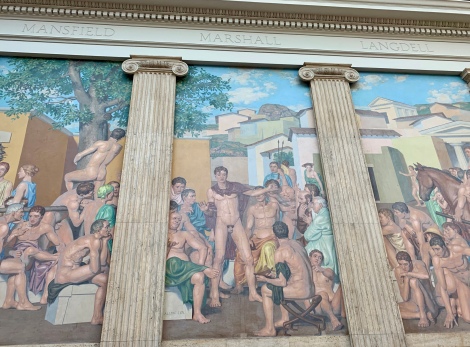 We studied this one for a while, but we never did figure out why there was a man climbing a tree (top left panel above) or what appears to be a fight going on in front of a horse: 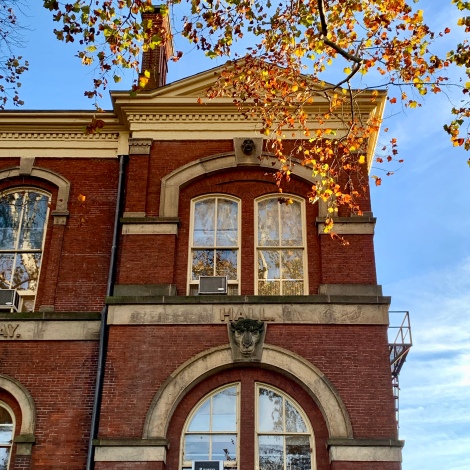 This Victorian Gothic edifice opened in 1878 as a museum of anthropology (it now houses that department). It was criticized by many at the time of its building for failing to fit in with Jefferson’s neoclassical vision, but I love that it has animal head carvings — including that of a camel, above — along the exterior walls.

UVA is in the midst of constructing a much-needed Memorial to Enslaved Workers (the university loves to celebrate its history but currently has little to say about the people upon whose backs it was built). While this memorial is under construction, they have put photos taken by Rufus Holsinger up along the construction fence. These photos depict blacks Americans in the early twentieth century, and they are both stunning and moving.

Founded in 1693, William & Mary is the second-oldest university in the US. It also boasts the nation’s oldest law school, the first honor code, and the only college seal granted by Great Britain. Given all of this history, it’s no surprise that William & Mary can post a list of super-famous alumni, including Thomas Jefferson, James Monroe, John Marshall, and many more:

William & Mary also has plaques to honor some lesser-known but also-important alumni, the only nod I saw on campus to a not-100%-glorious past:

William & Mary is home to the oldest college building in the country. Built between 1695 and 1700, the interior of the Wren Building has been damaged by fire three times, but the exterior remains intact. A recent renovation lets visitors see what the original grammar school room (for boys ages twelve to fifteen) would have looked like in the original building: 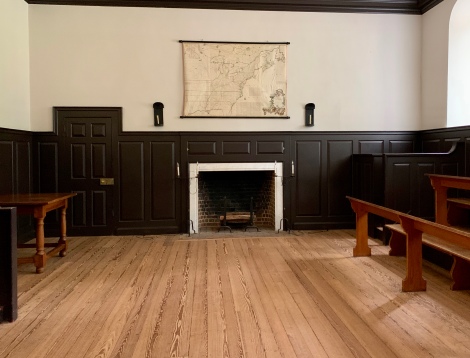 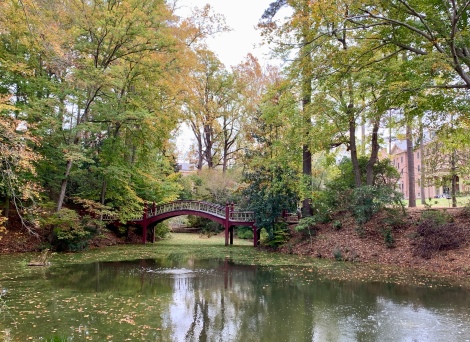 William & Mary has more woodsy, scenic areas than I might have expected, and this 1966 bridge is a sweet focal point. 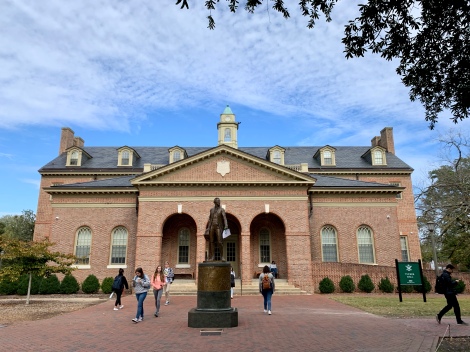 The second-oldest building on William & Mary’s historic Sunken Garden, this 1908 building was constructed to house the college’s library. It is typical of the quaint sedate architecture on this older section of campus.

One of the best parts about Washington, DC, is the bevy of free museums. These include the National Zoo, which has its origins in the National Museum’s Department of Living Animals, created in 1886. The zoo’s grounds were originally designed by landscape architect Frederick Law Olmsted, and while the exhibits have changed tremendously since 1891, the space still has Olmsted’s woodsy, natural feel. 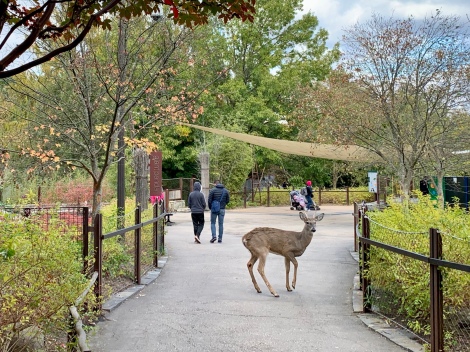 Not all of the animals are out and about on chilly November afternoons, but we did see this assortment: 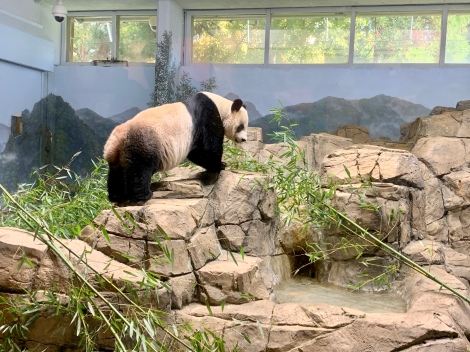 The pandas have long been one of the greatest attractions at the National Zoo. Currently home to three pandas (though one is about to be returned to China per a “you need to give panda cubs back once they turn four years old” agreement), the DC zoo has spaces where you can view the pandas both indoors and outdoors. We watched them drinking … 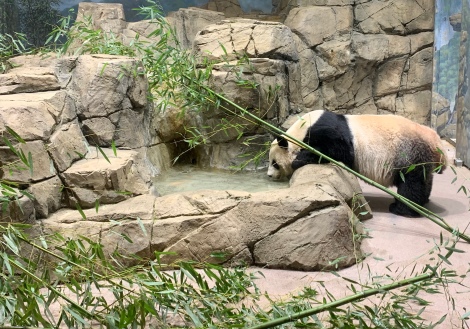 … and enjoying enrichment activities (here, trying to shake a treat out of a Kong):

If you want to watch pandas in real time from the comfort of your own home, the National Zoo has a Panda Cam!

This is the other end of the cuteness spectrum …

If you want to maximize your chances of seeing furry animals while also being indoors, head over to the Small Mammal House. We had a great time there!

I am obsessed with the way these guys look when they move. Here’s another one that I saw at the Singapore Night Safari last month:

When I saw signs at the zoo’s entrance telling me not to feed the squirrels or the deer, I thought they must be kidding about the deer. But in fact, there are deer bounding all over the place — we saw the doe above standing just a few meters away, and this young buck passed us on the trail!

Opened to the public in 1931, this impressive structure was awarded Best Brick Building of the Year. I love the detailed carvings of reptiles over the door.