The country of Singapore as we know it technically came into being in August of 1945, but somewhat bizarrely, we are currently celebrating the country’s bicentennial. That’s because 200 years ago, Sir Stamford Raffles came to Singapore, nabbed the island for the British, and proclaimed it a free port for all the world. And while some countries might mark this as the first date of colonial oppression, Singapore embraces this founding story. So it is marking the occasion in a grand year of 200th birthday celebrations. 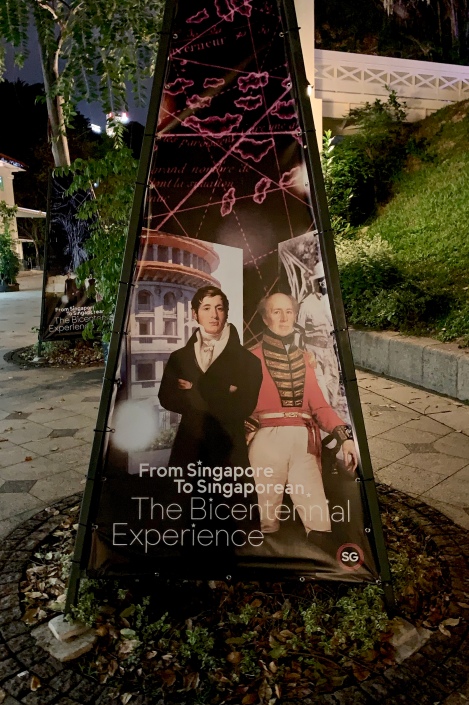 The centerpiece of this festive year appears to be “From Singapore to Singaporean: The Bicentennial Experience,” a free, sold-out, “multimedia sensory experience” at the top of Fort Canning Hill. Commemorating the moment when Raffles first landed his ship on the island, this extravaganza comes in two parts, “The Pathfinder” and “The Time Traveler.”

The Pathfinder section of the Bicentennial Experience takes visitors through a series of outdoor thematic pavilions. These include:

The loveliest of the pavilions, the Seed Conservatory focuses on plants of Singapore, both native and imported.

The focal point of this exhibit is a bamboo-inspired criss-cross of poles based on drawings commissioned by Singapore’s First Resident, William Farquhar.

This is an interesting reminder of the fact that “economic botany” was a major reason for European exploration of this part of the world, and that Fort Canning was once the site of a great garden developed by Raffles to see what he could grow in Singapore that might be worthwhile for export. Plus, it’s just beautifully put together.

Emporium of the East

This pavilion is home to outsized, plaster of Paris replicas of goods that would have been traded in and around Singapore many hundreds of years ago.

Objects on display include a hornbill casque …

… and this string of Chinese beads, which have been traced to the Yuan Dynasty: 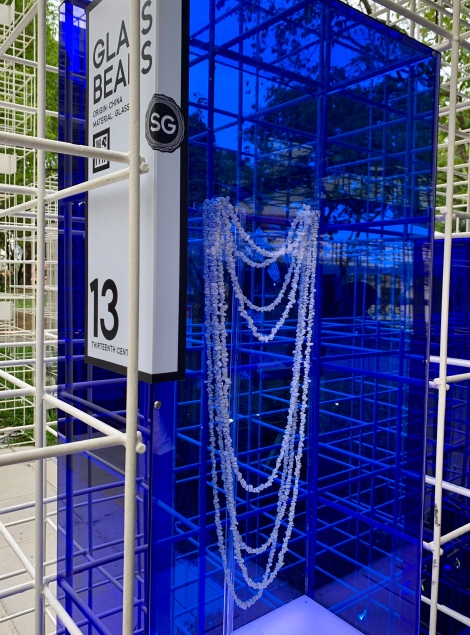 Why these have been fashioned out of plaster, and why they are in cases of solid blue acrylic, I cannot say.

This pavilion introduces the viewer to ancient, hard-to-see maps of Singapore:

The map above, by Abraham Ortelius (from his atlas, Theatrum Orbis Terrarum), was created sometime between 1588 and 1612. On this map, Singapore is called “Cingatola” — elsewhere in days gone by, it was also given names like “Sabana Emporium” and “Bargungapara.” On the map below, made by Jacques-Nicolas Bellin in 1755, Singapore is labeled as “Pulo ou Isle Panjang” (“Long Island” in Malay):

An entirely different sort of rendering may be found in the Al-Idrisi map, originally from 1154, made by an Arab scholar and a member of the court of King Roger of Sicily. On this map, Singapore has no name at all:

I love the idea of an outdoor library — I was really looking forward to this feature — but it’s hard to love a space where all of the books are knee- and ankle-high:

This section has three “telescopes”…

… in which you can see teeny-tiny boats …

… and an itty-bitty rendition of the Singapore River as it might have looked one hundred years ago: 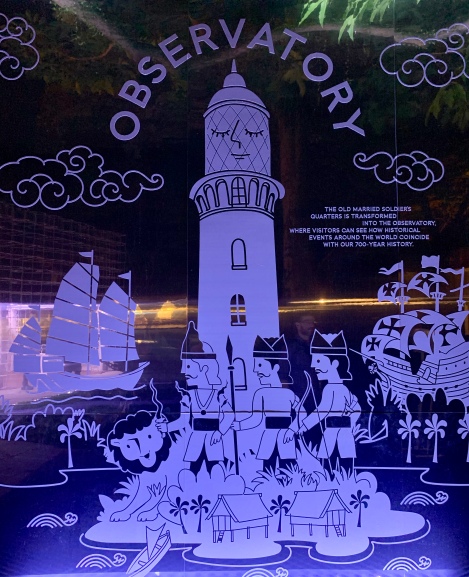 … to take a look at what was happening around the world from the 1200’s through the 1800s. Each wall represents a different part of the world, and you can stand in the middle of the space to see the centuries go by in a fairly informative slide show. I was fascinated by what they chose to put into this display (and often by how they chose to draw it — check out the kerchiefed Black Death).

Reflections of Our Past

… but people mostly end up taking pictures of themselves at this spot:

This is the sold-out part of the Bicentennial Experience, an immersive entertainment hour inside Fort Canning Centre that takes viewers from room to room through a very loose history of Singapore in five “acts.”

Act I made me laugh, because it has live actors walking on a travelator in front of an action-packed film screen (I’m not sure why I found this so amusing — it must take a lot of work to synchronize live actors with narration and moving images — but it felt a little silly to me):

This act takes the audience on a quick trip through the Srivijaya, Majapahit, and Ayutthaya Empires, and then through invasion by the Portuguese and incursions by the Dutch:

For Act II, the audience moves a rounded film screen that portrays “that fateful turning point in Singapore’s history”: the arrival of Raffles in Singapore in all its imagined drama and glory:

We see Raffles hard at work planning a new colony …

… exploring the land with William Farquhar both by boat … 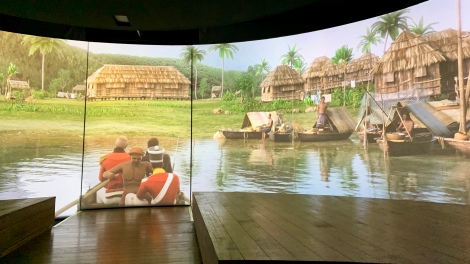 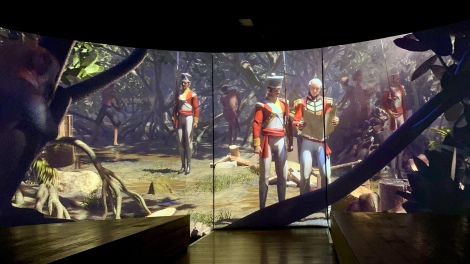 … and eventually getting the Dutch to concede that Singapore belonged to Britain.

For Act III, the film screen wraps around the room and becomes a circular surround screen. The seats begin to rotate, and viewers are taking on a broad sweep of many elements of Singapore history from the 1830s through the 1930s, including urban planning, economic growth, immigration, deratting, opium use, penal servitude, the 1915 Mutiny, and the development of the port:

But the focus here is really on the people, the many migrants who came and called Singapore home. 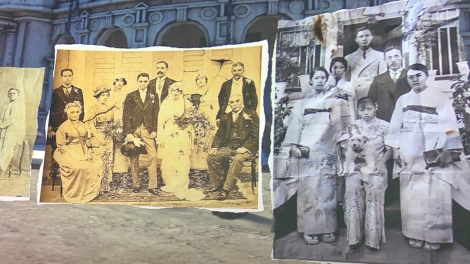 Act IV focuses solely on the Japanese invasion of Singapore during World War II. This part of the story is told in two dark, bunker-like rooms with black-and white images. It’s sober and disquieting, an appropriate change in tone from what’s come before.

For Act V, you’re given an umbrella and shown into a room where it’s raining!

This is real (fake) rain — you truly do get wet as the water drips steadily from tubes overhead. Even with an umbrella up, I started to feel a little soggy. As it rains (as it is wont to do in Singapore), you’re taken on a quick and somewhat random-feeling journey from 1950 to the present (the focal points seem to be Lee Kuan Yew’s funeral, the SARS epidemic, and various athletic accomplishments — never mind the building of major infrastructure, the creation of the HDBs, and the development of one of the largest financial centers in Asia). At the end, you are invited to look back on who was here when Singapore started …

… who has developed the country since then, and who we’ve become (apparently, an intergenerational pairing with a VR fixation): 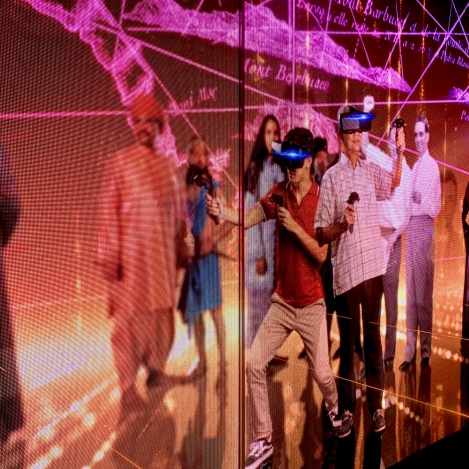 When you leave, you’re invited to vote on which “DNA trait” is most important to Singapore:

So far, with roughly 50,000 people voting over the course of the past month and a half, Self-Determination is ahead, followed closely by Multiculturalism. Openness is lagging behind.