Last weekend, Prescott and I took a kayak trip to see a couple of Singapore’s islands from the water. 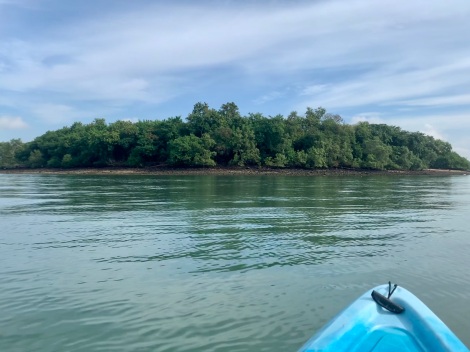 For this particular adventure, we took a 10-minute bumboat ride from Changi Point Ferry Terminal to Pulau Ubin; then we rented a kayak, and an Asian Detours guide took us around the southwestern coast of the island and over to Pulau Ketam (by way of translation, “pulau” means “island” in Malay, and the plural of that word is “pulau-pulau”). Here’s our guide explaining our route — the large island on the map is Pulau Ubin, and the very small island at Pulau Ubin’s southwestern edge is Pulau Ketam:

This was a fascinating tour …

… mostly because it allowed us to glimpse sides of two of Singapore’s offshore islands that we never would have seen otherwise. 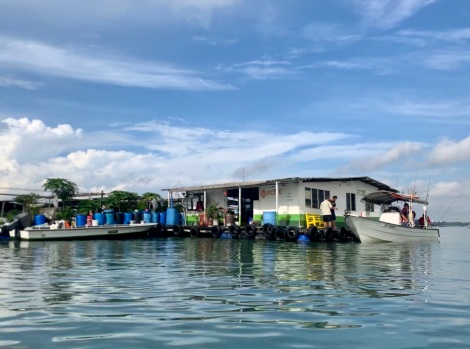 Our first unusual sighting was an up-close view of the handful of fish farms that lie just off of Singapore’s northeastern coast (in total, there are 110 licensed sea-based fish farms stretched out along the Strait of Johor). The owner generally lives on board, so these large floating platforms also serve as family homes.

Soon after this, we turned up into the narrow channel that separates Pulau Ubin from Pulau Ketam. You can’t really visit Pulau Ketam, also known as Crab Island; it’s pretty wild. This makes it a great place to see the mangrove forest, which is slowly growing back after years of island deforestation and aquaculture development.

It was low tide, so we were able to see the trees’ bare roots coming up out of the sand: 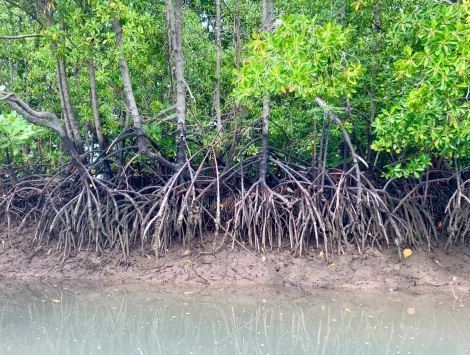 … and our guide led us on a walk to the German Girl Shrine.

The story of this place is a strange one. Apparently, when World War I broke out, British soldiers rounded up a German family that had a plantation on Pulau Ubin. But their 18-year-old daughter ran off into the woods and wasn’t found until several days later (at which point, rather gruesomely, her body was covered with ants). Her corpse was discovered by local laborers, who buried it and began leaving offerings.

Somehow this spot eventually developed into a shrine, and the Roman Catholic German girl became a Taoist deity (and if the internet is to be believed, local gamblers leave her lipstick and nail polish to this day).

After we walked back to the beach, we were rewarded with a view of Singapore’s military practicing air maneuvers for our upcoming National Day.

While we did swim at the beach, this isn’t water in which you would want to spend a lot of time. Unfortunately, the islands around Singapore are littered with trash, and the ocean is murky.

Back in our kayaks, we passed a few floating homes …

… and then paddled against the current to return to shore.

Pulau Ubin is a wonderful island, a great getaway from mainland Singapore. This time, I spent time marveling at seaside offerings …

… and beautiful plantings along a small stretch in town, including this unexpected cotton specimen:

But I was most excited about our hornbill sighting! 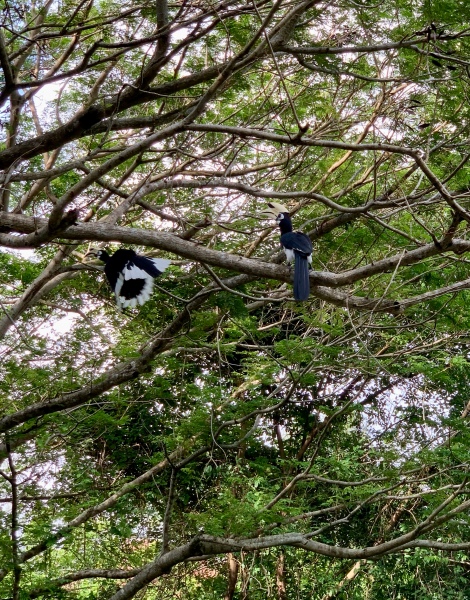 We found this flock of Oriental pied-hornbills (four in total) on a short walk to Pulau Ubin’s Butterfly Hill.

These are amazing creatures — I could have watched them for hours!