I think it’s safe to say that Prescott and I are both totally exhausted.  We started with our meeting with HR at SAS in Woodlands, up at the top of the island.  The trip on a map appears to be less than 10 miles, but from our hotel down in the central business district, it takes over an hour by public transportation to get there.  The MRT, or the subway/rail/train (whatever you prefer to call it), is a great way to get around, but it takes forever for reasons I don’t quite understand.  Then add to the long ride the significant walking to and from MRT stations while wiping the sweat from your brow, and simple travel can feel like a project.

The not-highlight of our day was a two-hour ordeal at our new bank.  Singapore is supposed to be a model of efficiency, but someone failed to tell the banks that.  So we sat and waited and then met with an agent and then stood and waited and then got sent to another agent and sat and waited, all the while wondering why the bank AC needs to be set at the temperature of a meat locker.  Suffice to say that this was not the best part of our journey thus far.

Our afternoon was fascinating: we took a trip over to Little India, which feels distinctly not at all like Singapore.  It’s the first area we’ve been to that feels like it has its own real sense of culture and place.  Everything feels a little chaotic and a little messy (we saw actual litter in multiple places).  You can buy saris and gold necklaces and spices; you can eat chana masala and dosas and naan. 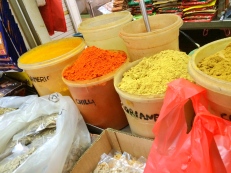 We stopped and had fresh roti (a flat bread that comes with a dipping sauce) for snack at a hawker center, and it was amazing.  It was also incredibly cheap — SD $1.80 (about US $1.20).  Now we measure all other food by saying, “how many rotis could we get for that?”

Strikingly, the temples and buildings in Little India are colorful and pretty short, usually no more than two stories tall:

It’s worth comparing this scene to what you usually see in Singapore, which pretty much consists of architecture of two different types: (1) the shiny, giant variety; or (2) the lego-block variety.  More on each of these below.

1. Pretty, shiny, large buildings.  These may be businesses or condominiums; they look (and probably are) expensive:

The building on the left is the School of Visual Arts (which, if you can’t see, has big green walls on the sides of each tower); the one on the right is an apartment building behind our hotel (I’m obsessed with its cantilevered balconies).

2. Lego blocks.  These are Housing and Development Board (HDB) housing; 85% of the people here live in them, and they are remarkably uniform in appearance and poorly designed from an urban planning perspective.  These buildings come row after row, with no shops or urban centers of any sort scattered among them — it’s just lots of housing all in one place, often followed by a park (or just more housing).  The only thing that distinguishes the HDB buildings are the color of the building sections and the individual building numbers:

After a quick stop at the hotel pool, we ended the evening with a wonderful sushi dinner at Wasabi Tei Japanese Cuisine.  This tiny restaurant is tucked into the fifth floor of an old, odd mall called the Far East Plaza, hiding amidst thirty or forty nail and hair salons.  The bar, manned by one sushi chef and his helper, seats fifteen people in a space smaller than our old living room.  Great fish, fascinating atmosphere.