Today was another tiny islands of Singapore adventure (Singapore is having a big birthday party tomorrow, so we had the day off from work).  Today’s journey took Prescott, Kristen and me to Pulau Ubin, a tiny island just north of the east side of Singapore’s main island (which is just called “Singapore”).  People say that this is the place to go to see what life was like in “old Singapore,” because aside from a few roads and thunderstorm shelters, the island has been largely untouched by Singapore’s development craze.

You get to Pulau Ubin via “bumboat” — rather than ride a ferry with a set schedule, you just wait at the terminal until twelve people are ready to go, and then everyone loads onto a super-narrow boat for the ten-minute trip over.

Houses on Palau Ubin really do look different — lots of corrugated roofs, one-story houses on stilts, dilapidated walls and windows, actual space between buildings, and a notable lack of air conditioning units.  You feel like you’re suddenly someplace a little run down in the way that only the tropics can be.  But it also feels homier and more real, somehow, than the rest of Singapore.

Once we arrived, we rented bikes in the main village (which is only about twice as long as what you see in this picture). 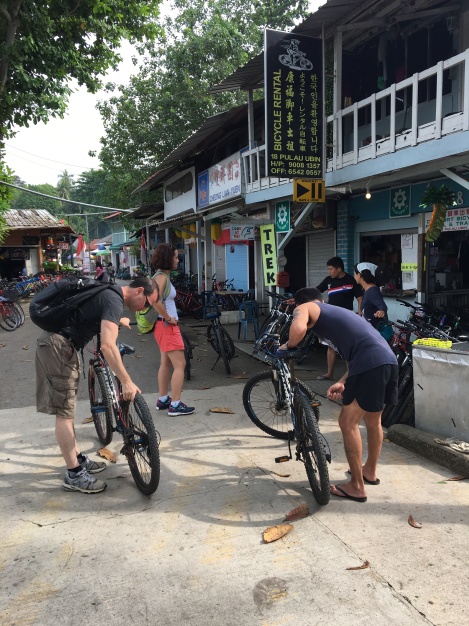 We then trundled off into the jungle, where we were met almost immediately by a huge group of long-tailed macaques.

It was so much fun to watch them play around in the trees, especially the babies.  But then our attention was diverted by a group of three wild boar — and a tiny boar baby!

The boar baby is in the upper left in the photo above.  Please note that if you ever want to do wildlife photography of small animals that blend into their surroundings and will not stay still, you should do it on something other than an iPhone.

The (fortunately friendly) feral dogs were slightly more cooperative about having their photo taken:

The paved road that you see above soon ran out, and we were biking on dirt roads for most of the rest of the way.  Our bikes were absolutely terrible, and the terrain was a little more exciting than I’d anticipated, but it was fun.  We passed through lots of jungle with a few houses scattered here and there.  Vegetation takes over really quickly here; we saw multiple cemeteries whose headstones were being slowing but surely knocked over by trees and eroding soil (if you look closely below, you’ll see that one of the headstones appears to be growing into the tree trunk).

Our biking destination was Chek Jawa; this sounds like something from Star Wars, but it’s actually a wetlands preserve.  We started out at the visitor’s center, an anachronistic Tudor house built in the 1930s as a vacation retreat.  It reportedly has the only fireplace left in Singapore (though why someone installed a fireplace in the first place is a mystery to me).

There, we learned about Singapore’s “Heritage Tree Scheme.”  I love that name.  Someone is Singapore has been scheming since August 2001 to save trees.  Brilliant.  Two of the mangrove apple trees they’re scheming about are in the middle of the photo below: 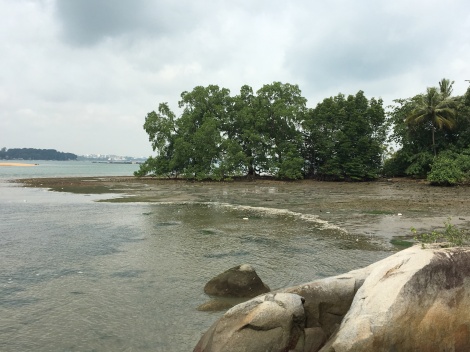 We walked on a boardwalk over the tidal mudflats, which would have been completely beautiful had it not been for the litter.  I can now see why Singapore has such strict litter laws — this place can really become a mess.  It’s too bad, because otherwise, the walk had a fascinating, idyllic feel.

They’ve also built a great viewing tower, where you can stand above the treetops and search for birds (I think I found an emerald dove, but my birding skills need work).

We also hiked through a huge mangrove swamp (note the litter in the foreground).

Someone has worked very hard to build a boardwalk through the swamp:

My favorite part of the mangrove swamps were the mud lobster mounds, which are tall volcano-like blobs of mud that the lobsters build in the mangrove muck and then call home.  We didn’t see the lobsters themselves, but we did see tree-climbing crabs that borrow the lobsters’ living quarters.

After we finished our walk, we returned to our bikes and rode back to the main village via an old quarry, which is now quite beautiful:

The one seafood restaurant in town did not look especially inspiring, but we did stop for coconut water drinks (Kristen used to live in Malaysia, so she knows all about the importance of things like ordering your coconuts ice-cold):

I really appreciated the quiet of Pulau Ubin — the only noises are people, bikes, and birds (with the occasional monkey swinging on a branch).  Even the roads are quiet; there seem to be only three or four vehicles on the entire island (two owned by the police).  I also liked that it was the kind of place where the coconut stand doubles as a terrible general store, and where the “taxi stand” had no taxis in sight.

For lunch, we returned to Singapore for a yummy lunch (mostly noodles) at the Changi Hawker Center.

Pres and I had a lazy afternoon listening to the construction noises all around our condo complex, both in the apartment and at the pool.  My favorite new pool is lined by beautiful red ginger plants on one side…

… and by what appear to be orchids on the other.