I feel like the day would be incomplete if I failed to write about my first durian experience.  Durians are a spiky, stinky fruit that get a really bad rap:  people dislike their smell so much that you cannot take them on any public transportation or into most hotel rooms.   Their odor has been compared to sweet unwashed socks, a clogged drain, and pineapples rotting in the sewer.  You can smell them at the market from about half a block away, and grocery stores only sell pieces of them very tightly wrapped (if they sell them at all).  I have also read enough about durians to know that one French naturalist said that they taste like “the flesh of some animal in a state of putrefaction.”  But some people here swear by them, and someone has allegedly dubbed them “the king of fruits.” 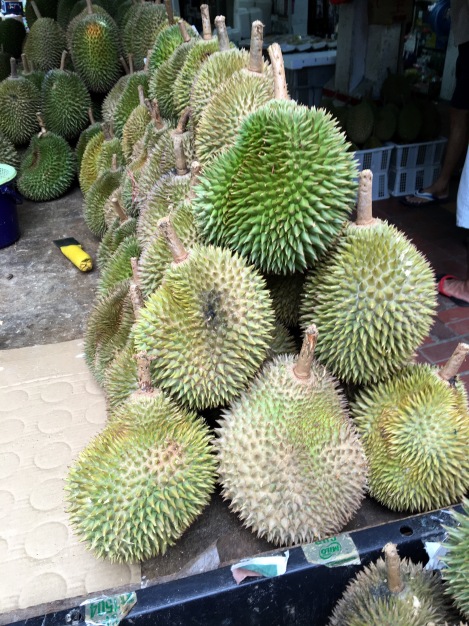 I happen to love the smell of durians — go figure.  There are two fruit vendors on my way home that offer huge piles of them (I’ve been told that they are in season right now).  So Kristen and I stopped and I asked if I could have a taste of one.  After some confusion involving a serious language barrier, the vendor opened a fresh durian and offered me a slightly slimy, slightly custardy segment surrounding a rather large pit.

It was not at all what I expected.  First of all, the texture was something between gloppy mashed potatoes (with no lumps) and pudding.  I hadn’t expected it to be so starchy.  Secondly, the taste was not revolting — but it was also not good.  My first thought was, “I actually don’t mind eating this.”  My very next thought was, “but I would not eat it again.”  Those thoughts were followed shortly thereafter by, “why did I do that?  And why does the aftertaste remind me vaguely of garlic?”

So that’s it. I’ve been waiting to try durian for about twenty-five years, since I was last in Southeast Asia, and now I’ve done it.  I wish I’d liked it more, but the appeal is lost on me.