I spent Sunday afternoon in Bangkok visiting Wat Pho, a temple complex whose official name is Wat Phra Chetuphon Vimolmangklararm Rajwaramahaviharn (I couldn’t resist putting that in — Thai names are amazing).  The oldest sections of the main temple probably date back to the late 1600s, but most of the complex was built in the mid-1800s.  It’s still in use, both as a place of worship and as a school — it is considered Thailand’s first public university.  If you could see the whole thing from above (and it weren’t pouring rain — more on that later), it would look like this: 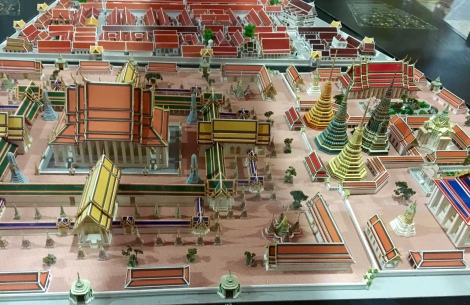 Wat Pho is most famous for the Temple of the Reclining Buddha.  This giant gold figure is one of the largest statues of the Buddha in Thailand.  It’s hard to capture its impressive enormity.

I spent a lot of time with this Buddha, both because it’s amazing and because it was pouring rain outside.  Wow, can it rain in Bangkok.  And not only can it rain — it can also flood.  Bangkok is flat as a pancake and definitely lacks drainage.  Within half an hour, the temple grounds were covered in water higher than my ankles (I know this because I walked through it).

The Reclining Buddha barely fits into its temple — it’s a tight squeeze.  The walls of the temple are also covered in floor-to-ceiling paintings.  Here’s are a couple of examples:

There are Buddhas everywhere at Wat Pho — tall Buddhas, short Buddhas, seated Buddhas, standing Buddhas, you name it.  The one unifying feature is that pretty much all of the Buddhas are shiny.  Very shiny.

I was also lucky enough to stumble on what I can only call Buddhist Sunday school: 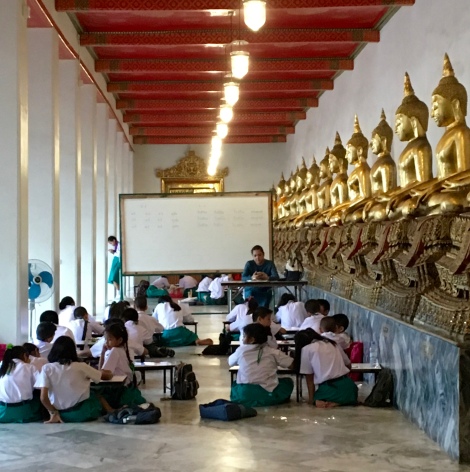 The whiteboard there has the word “Buddha” repeated multiple times in both English and Thai — I can only assume that the kids were supposed to be copying it (but they looked spectacularly inattentive).

Wat Pho also houses a school for Thai massage, and these fascinating diagrams were on the walls of one of the small pavilions: 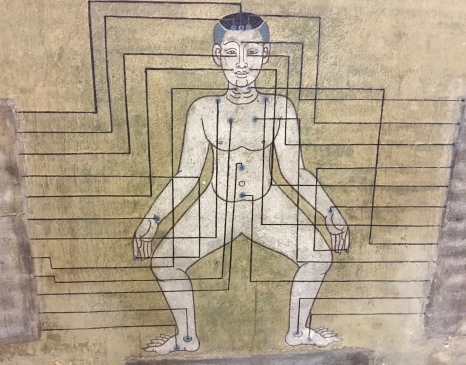 There are all sorts of structures in the temple complex, include these “chedis,” which I’m pretty sure contain the ashes of various members of the Thai royal family. 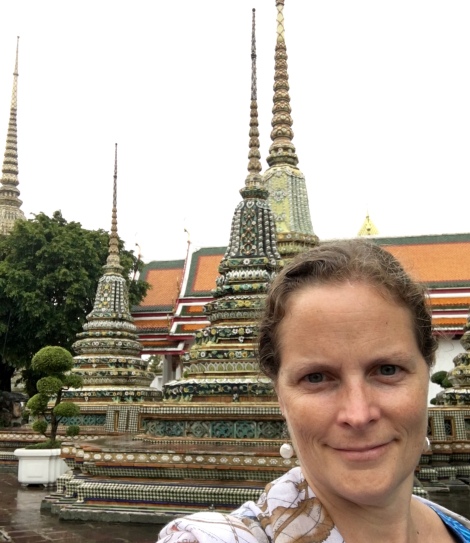 The buildings in the complex are very neat looking — and, again, very shiny.

Monks are a common sight in Thailand.  I saw these two just outside the gates: 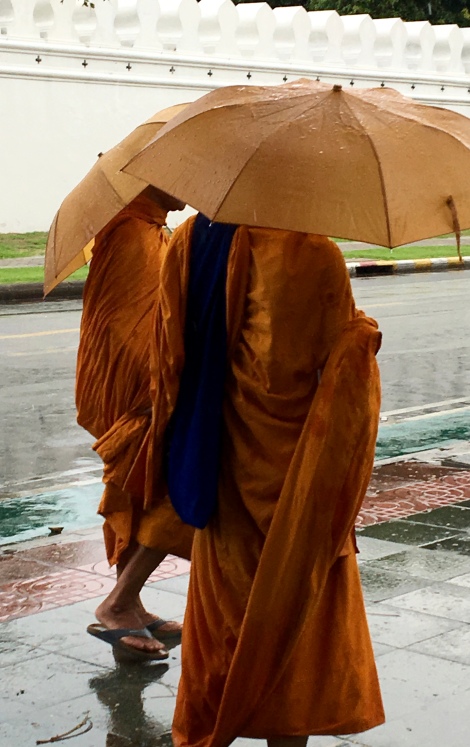 To get back to my hotel, I took an express ferry down the river.  This was the kind of overcrowded local ferry that gives you insight into how ferries in developing countries sometimes end up sinking.  It was a great ride when I wasn’t wondering whether we might all end up in the water.  Bangkok used to be called the Venice of Asia for its many waterways and canals.  As you can see, there are still lots of buildings on stilts and pilings. 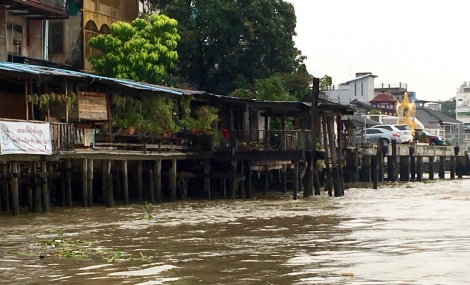 Bangkok is also a very wet city — older buildings that aren’t maintained look like they might just rot away.

After the river excursion, I changed out of my soaking-wet dress and shoes and returned to the airport.  My taxi was pink!  This is common in Bangkok, but I was still pretty excited.

I’ll end with a sign that I saw both on billboards and at the temple.  I’m not sure what’s been happening in the bars and in the tattooing department, but I was surprised to see this campaign. 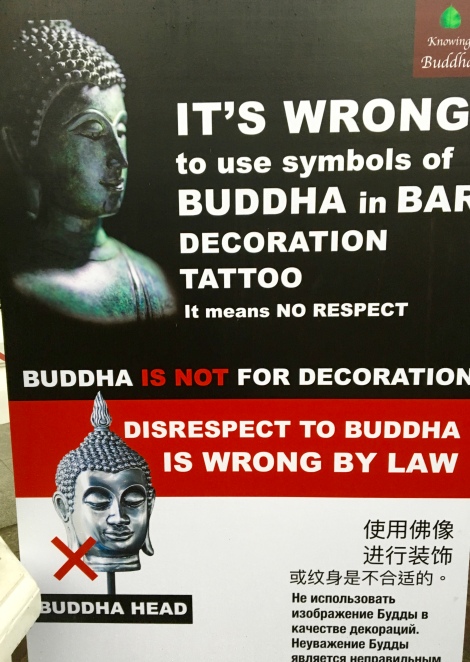 One response to “Temple Time”