J and I woke up early this morning to make our first trip to Angkor.  Our tuk-tuk driver stopped to buy gasoline from a Captain Morgan bottle.

Angkor is not just one place — it’s an enormous set of temples, walls, towers, moats, and piles of rubble set within 77 square miles of jungle.  It would be very difficult (hot, long, dusty) to walk from site to site, so most people rent a tuk-tuk or car and have someone drive them around all day.  Most people go to one or more temple complexes over the course of the day, depending on their time and level of ambition.

The roads became dustier and dustier as we drove toward Angkor, so we took refuge in J’s scarf: 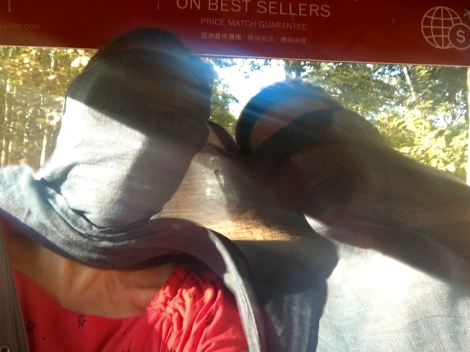 Our drive in Angkor started past this beautiful lake:

It turns out that there is a lot of water in and around Angkor — more in the summer, which is their wet season, but even now you can see a lot of lakes and rivers.  The Khmer, who built the temple complexes largely between 900 and 1200 C.E., were masters of hydrology as well as being impressive temple-builders.

For all of the water, however, in the dry season (which is now), Angkor is hot and remarkably dusty.  And while the trees are green, there’s very little undergrowth in the jungle.  Everything on the ground is pretty scrubby.

Our first temple of the day was Pre Rup, a relatively early site dedicated to Shiva.  It’s impressive; the first thing you see when you drive up are three enormous towers on a tall platform: 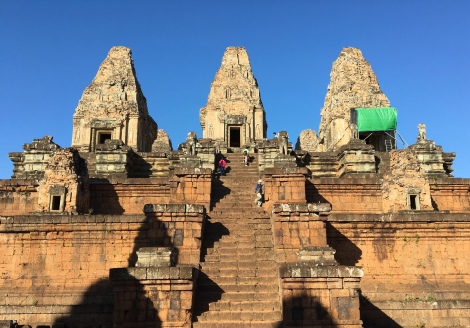 The towers themselves are the major attraction for most visitors. 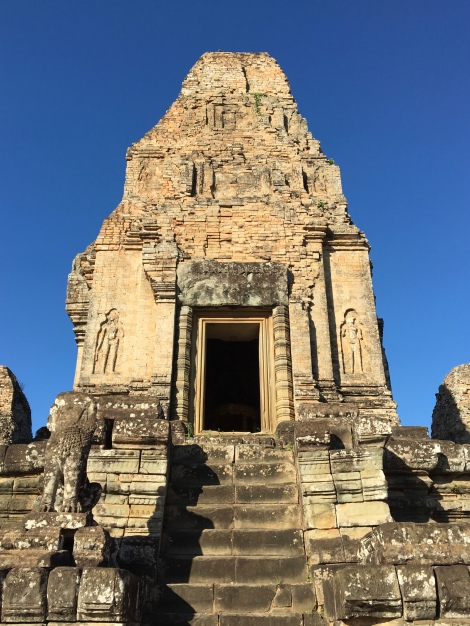 But J and I spent a lot of time wandering the roads less traveled, like the long rows of now-roofless doorways…

… and the naked columns …

… and whatever it might be that J is studying here.

I also really liked these carved cylinders, which are all over the place and seem to function as designs (and maybe also screens) in many of the windows: 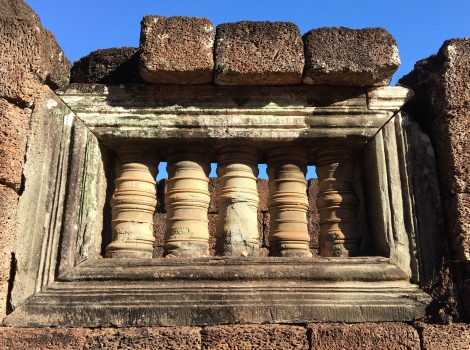 Our second temple visit was to East Mebon, a complex from the same time period which used to be entirely surrounded by a lake (sadly, the local rice paddies have drained this particular feature). 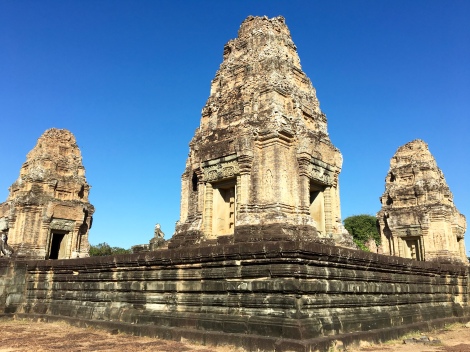 It was notable for having lots of great animal statues, which would have greeted visitors when they came in on their boats. 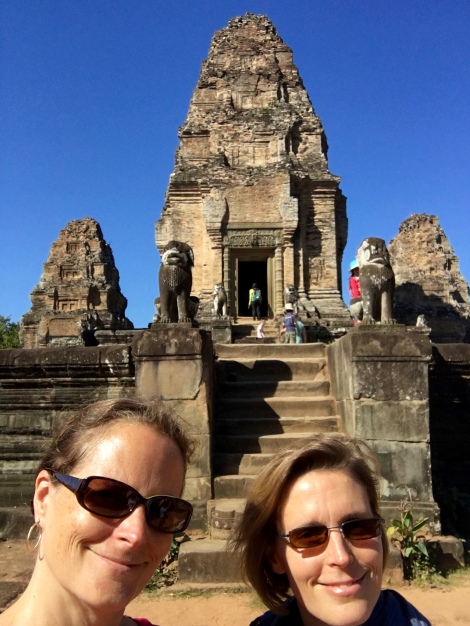 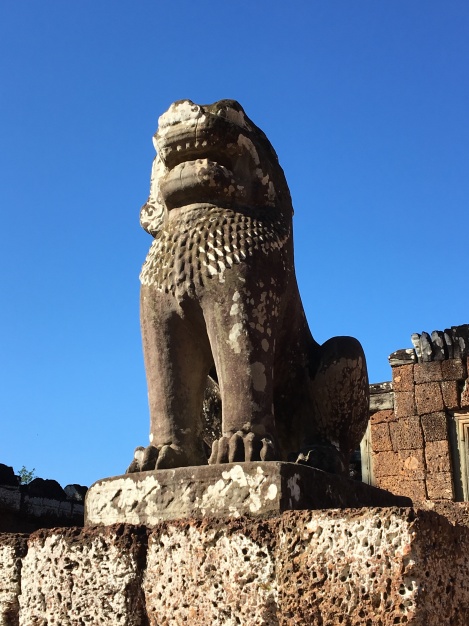 East Mebon is also known for having some excellent carvings, such as this one of Lakshmi being sprayed by the lustral waters of two elephants (“lustral waters” is a phrase from our guidebook).

We also found this carving of Ganesha riding his own trunk, which turns into a horse …

… and this lintel with Indra riding his three-headed elephant.

Once you’re done admiring the Khmer stonework. you can also admire (and feel concerned about) the ravages of time.  Things are falling down (or already fallen) all over the place.

We also saw evidence of what is either (a) graffiti or (b) instructions to the conservators, but since our Khmer language skills remain nonexistent, we really can’t tell. 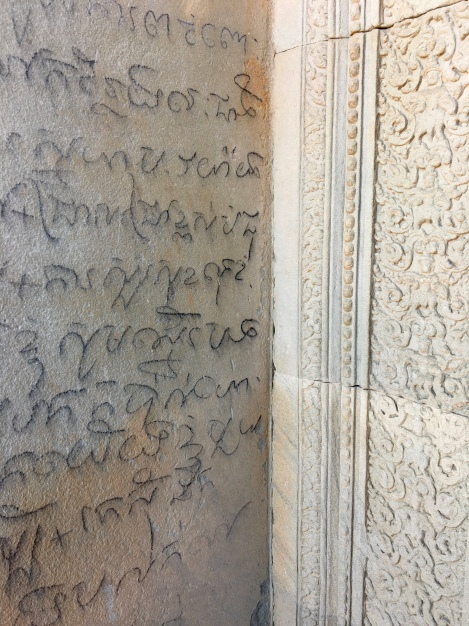 We drove much further into the jungle to go to Ta Som, a temple built at the end of the twelfth century.  When we arrived, J remarked, “wackadoo, man, this place is a mess.”  T Som offers lots of examples of what these temples look like when everything from marauders to termite mounds to ficus trees take their toll: 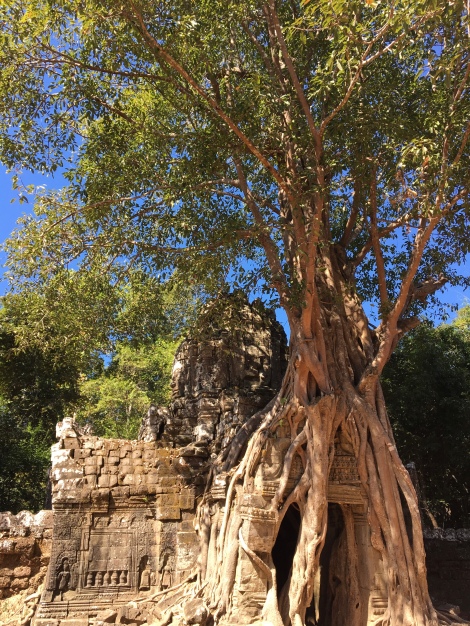 It’s elegant, though — we got our first good look at the carved women that adorn so many of Angkor’s temple walls…

…and at statues of nagas, the many-headed snakes that are quasi-evil rain deities. 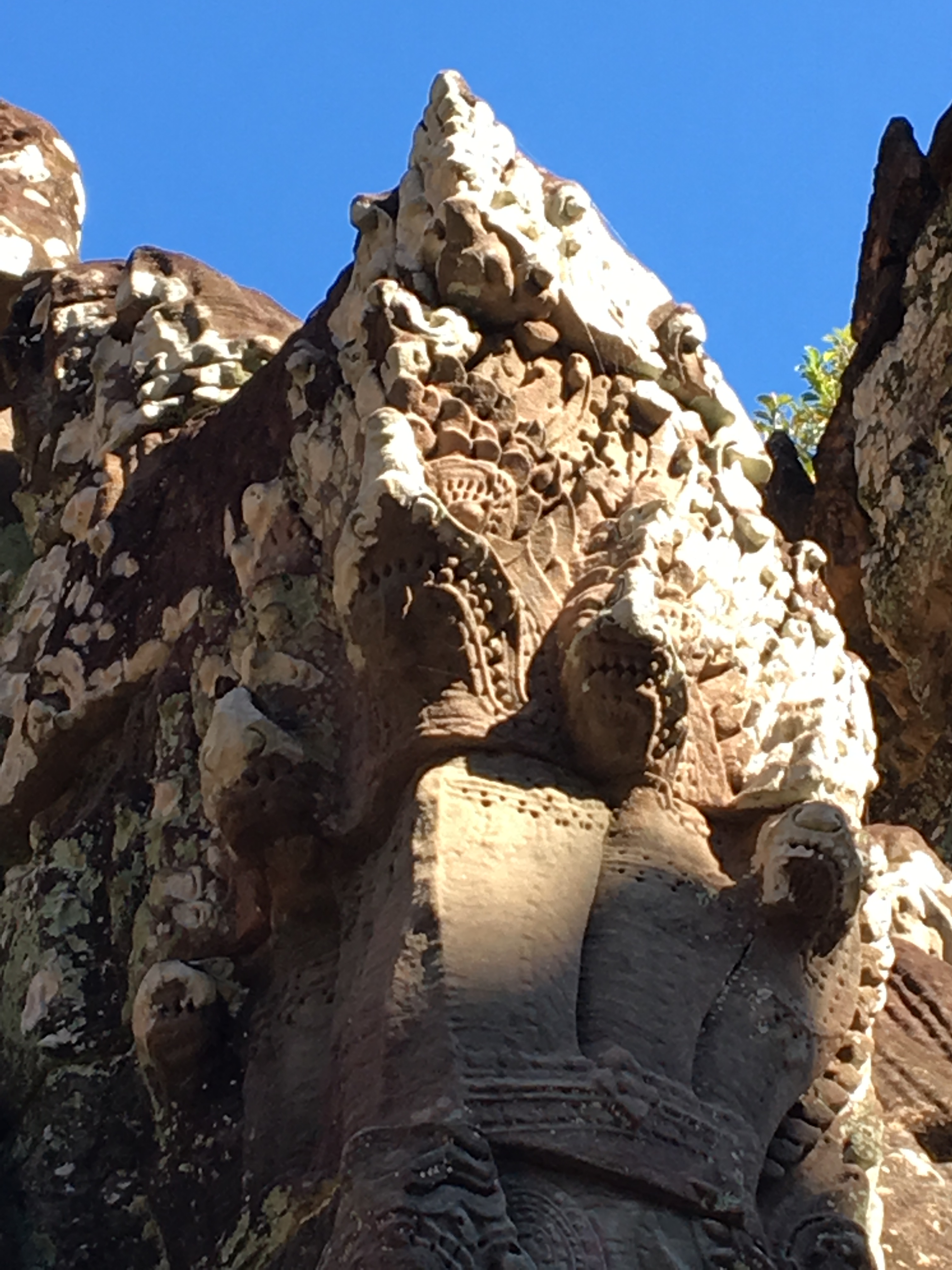 Ta Som is known for the huge faces on its towers (which struck J and me as being more Central American than Southeast Asian):

We then visited the much-hyped Neak Pean, which is built on an island in the middle of a lake. 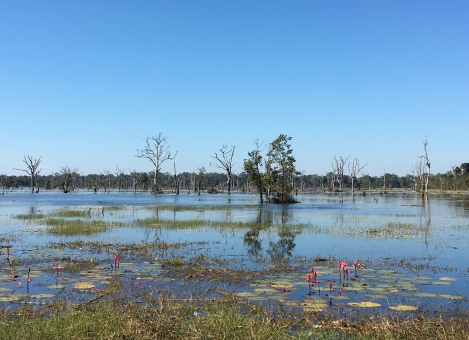 The French explorers built a jetty out to the island, and this is where we had our first exposure to the hordes of people for which Angkor is so rightly famous. 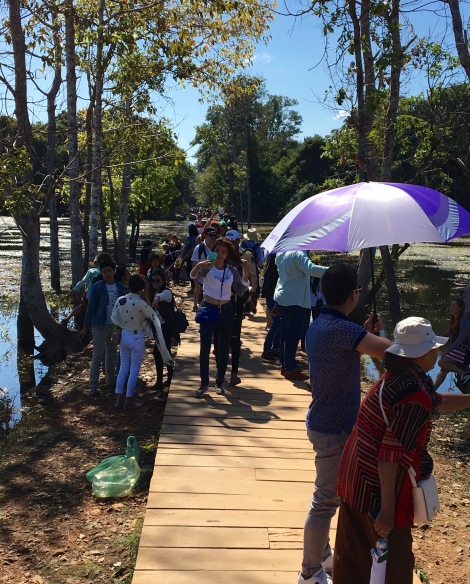 We’d had a pretty quiet morning up till this point, but J was not unreasonably worried that I might fall into the water given the narrow path, the throngs of people, and my tendency to be distracted by flowers and dragonflies.  I’m happy to report that I stayed dry.

Neak Pean itself proved to be a little disappointing, mostly because it was surrounded by a fence.  Everywhere else we’d been thus far at Angkor had been very much open — aside from the occasional “no entry” sign, you could go wherever you wanted.  So it was odd to be kept at a remove from such a major site.  And the water surrounding the temple (which is built on a manmade island in the middle of a square pool) looked like it needed a little freshening.

Still, it’s an interesting place, and the story of the bodhisattva (a Buddhist holy person) who turned himself into a horse to rescue some shipwrecked guys from an ogress is a pretty good one.  The horse is in the pool above just to the left of the temple.

Our last stop of the day was Preah Khan, by far the largest of the sites we visited.  This huge complex was built by King Jayavarman VII (whom we affectionately call JV 7) as a Buddhist monastery and center of learning.   We were getting pretty hot and tired by the time of this visit, but it was impossible not to be impressed.  A long line of divinities and demons holds a giant naga as you enter along the Processional Way.

I decided to help them: 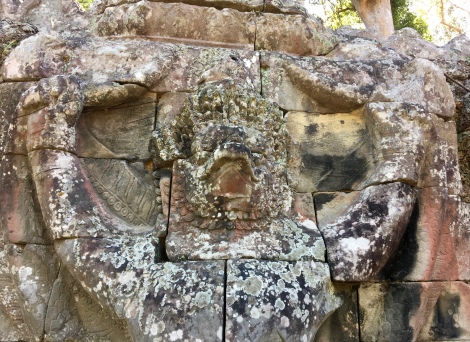 Here’s a goruda with a naga over its head (the two do battle on a regular basis): 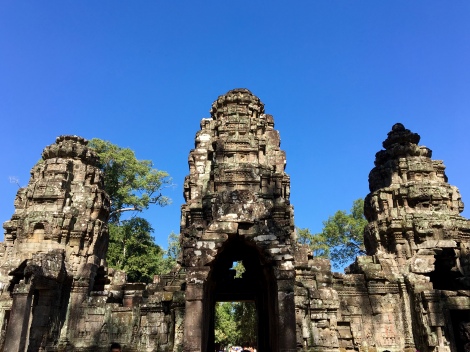 We found dancers on the lintels in the famous Hall of Dancers:

There were also engravings all over the walls:

We particularly loved this area in one corner of the temple complex: 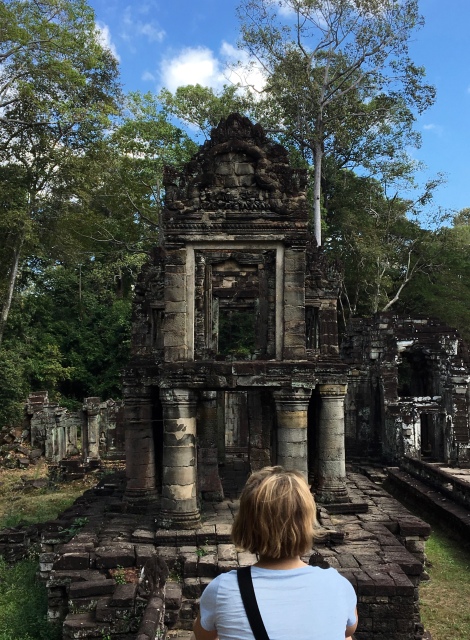 Buddhist monk schoolboys were visiting the temple, too: 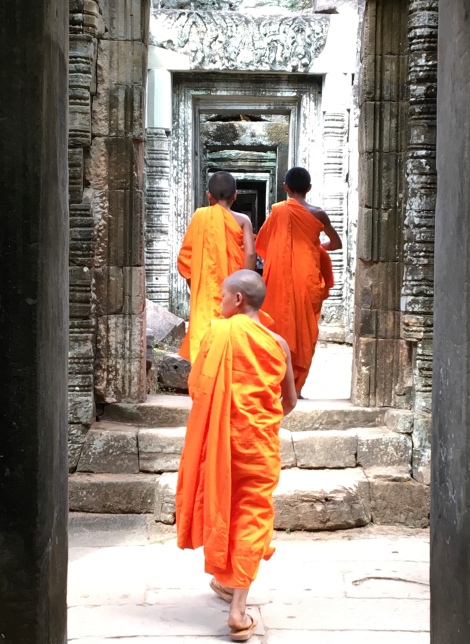 There is a wide variety of statuary, from these guys …

… to more women in the walls …

… to this little dude holding up far more than his weight in stone:

But for all of the standing beauty, there are constant reminders that this is a ruin, and that much of it is just on the edge of falling over (or has already fallen down and has been put back together by preservationists).  You can find stuff scattered all over the forest floor at the temple’s outskirts.  This piece was just lying on the ground:

And you can bend down and pick up spare pieces of thousand-year-old Angkor temples:

There are entire rooms of large rubble in the temple:

And there are trees all over the place, many of which are growing on or under — or through — the temple walls.

Unfortunately, J’s tummy hasn’t been feeling well since she left Thailand, so she spent some time sleeping on a rock (she swears she was comfortable). 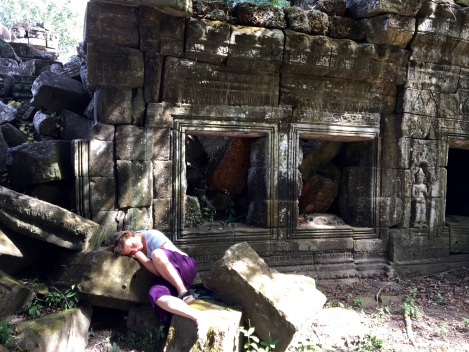 We stopped for much-needed beverages on the way out, including this enormous coconut: 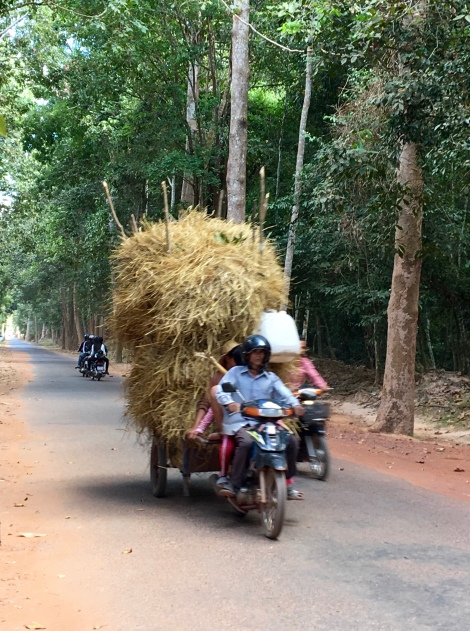 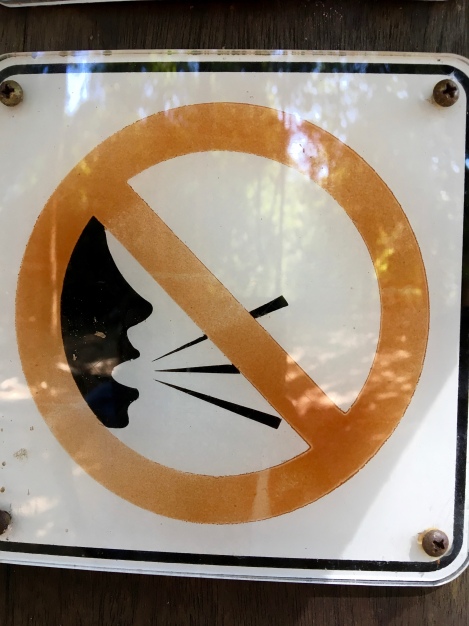 No yelling? No singing? No spitting while you talk?