Singapore turned 52 years old on Wednesday! The country’s birthdate is marked by the day on which it became independent from Malaysia (an uneasy union that lasted just two years) in 1965. It’s a funny holiday in a way, because it celebrates the occasion of Singapore being kicked out of the Malaysian federation — the Malaysian parliament voted 126-0 to expel the island of Singapore from a combined Malaya, North Borneo, and Sarawak. So Singapore’s independence day is also Singapore’s getting booted day. 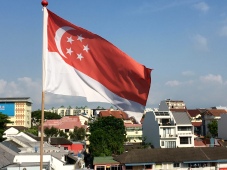 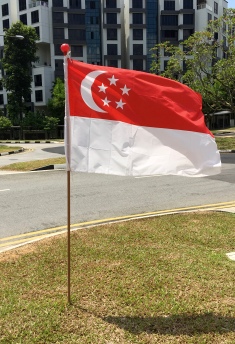 … and there are banners everywhere: 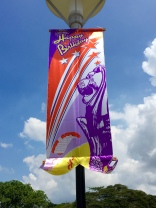 Many of the banners say “Majulah Singapura,” which means “Onward Singapore” in Malay (and is also the title of the national anthem):

The government of Singapore is constantly concerned with preserving racial harmony in the country — not a bad mission for a place with so many ethnicities and religions. The theme of National Day this year was “One Nation.” The National Day logo (Singapore loves logos) had four hands representing Singapore’s four core races (Chinese, Malay, Indian, and Eurasian) surrounding a map of the island: 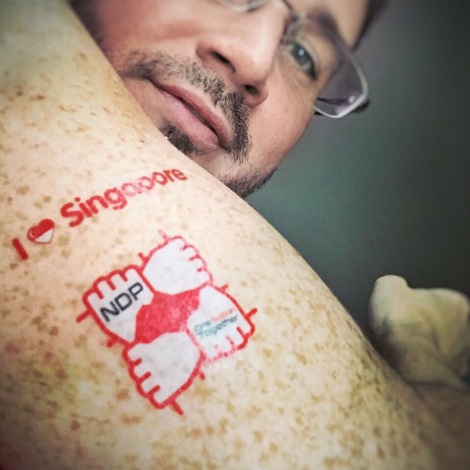 As you can see, Prescott and I had fun with National Day temporary tattoos:

To celebrate, we went down to the Marina Bay area to watch the fireworks with thousands and thousands of other people.  It was an interesting experience, because people in Singapore have no sense of personal space.  So going to a crowded event can involve a lot of pushing and shoving and wishing people weren’t standing quite so close to you.  But we had a great time watching the sunset over the bay: 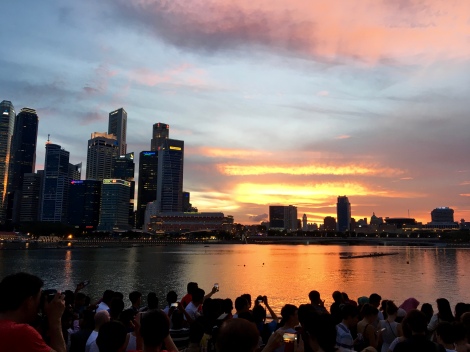 Many of the buildings were lit up to celebrate National Day.  Here’s the top of the Esplanade complex …

… and the underside of the roof of the Marina Bay Sands Hotel: 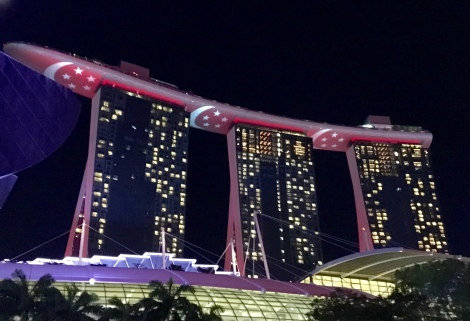 The fireworks themselves were spectacular.  Unlike fireworks shows in the US, which tend to be long and have one bang going off after another, the shows here are short (this one was four and a half minutes) and have tons of fireworks going off all at once.  It was marvelous to be standing right underneath them.

We were also treated to a drone show — the Singapore National Day committee teamed up with Intel to send 300 drones up that flew around and made different shapes, from a heart to a map of Singapore to the Merlion:

The only uncomfortable part of the evening was trying to leave the show — it’s one of the few times in my life when I found myself thinking, “oh, this is how people get trampled in large crowds.”  But we made it through the mob safely and onto the packed MRT home: