The highest mountain in New Zealand is the awkwardly-named Aoraki/Mt. Cook, which sits in the Southern Alps in the middle of Aoraki/Mt. Cook National Park. The name is a compromise between the Maori term for the peak and its European designation; we would have the same thing in the US if we chose to use a slash and have a mountain called “Denali/Mt. McKinley.” For nearly 150 years, Aoraki/Mt. Cook has been a popular area for skiers, ice and rock climbers, and hikers — it’s where Sir Edmund Hillary cut his teeth in preparation for scaling Mt. Everest.

Prescott and I traveled to the small enclave known as Mt. Cook Village (permanent population 250) so that we could hike in the national park. We had no aspirations for doing any of the major peak climbs — those all require lots of gear, time, and technical experience — but there are a lot of nice day hikes with views of glaciers and glacial lakes.  We also wanted to go stargazing, because this park has some of the clearest air in the world. Unfortunately, it started raining on the afternoon that we arrived and didn’t stop raining until we left New Zealand two days later. So we saw no stars, and our hiking options were limited. But we still had a lovely time.

The road leading up to the national park follows the western shore of Lake Pukaki.

For those of you following along with my very limited Lord of the Rings tour, this is the location that Peter Jackson chose for Lake-town in one of the Hobbit movies. It was also  the clearest view of the mountain range that we would have on this leg of our journey.

When we arrived at our village chalet (affectionately dubbed Chal8 by Prescott), we could still see these mountains …

… and this set of glaciers (the park has about 180 glaciers all told):

As we sat and had tea in the lovely Old Moutaineers Cafe, we could look past our little chalet cluster to the clearest view were were to have of Aoraki/Mt. Cook’s famously pointed peak (it’s the snowy one on the right):

The weather grew worse in the course of just a couple of hours. Before the fog set in completely, I ran up the short Blue Takes/Tasman Glacier trail. A hundred years ago, the Blue Lakes were actually blue, because they were fed by frigid glacial meltwater. But the glacier that fed them has been receding, so now they are supplied by warmer rainwater and populated by green algae (the red stuff around the edges is dead leaves).

It was really raining by the time I got up to the Tasman Glacier lookout. 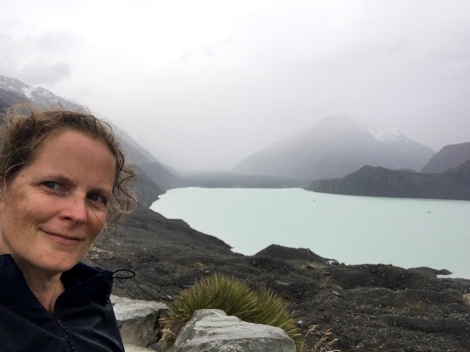 The Tasman Glacier is the longest and largest glacier in New Zealand, though it has been steadily receding and may lose those titles at some point in the not-so-distant future. From a distance, it is hard to identify as a glacier, because it is entirely rock-covered (the mountains here are sharp and break apart under the area’s high winds and rain very easily). So while most glaciers in the world are white (snow) and blue (ice), this glacier is mostly black. But if you squint through the fog and use your imagination, you can see Tasman Glacier running across the entire length of the top of Tasman Lake:

If you look down to the lake’s far end, you can see pieces of ice that have broken off of the glacier and are now floating freely:

In the fog, the whole landscape was eerie and beautiful.

On our second day, it began raining in earnest, so we had a lazy morning and then went to the excellent visitor center. Aoraki and his brothers (who became the stone mountains in Maori legend), including the wind, are pictured in the large carving that you see immediately upon walking in the door.

The visitor’s center teaches you about glaciers (how they’re made and how they melt), local geology and weather, fauna (birds and mostly invasive/introduced mammals), and the long tradition of mountain climbing in the area. You can get lost in the tales of derring-do, courage, and crazy ideas. And it’s serious business; there’s a whole section of memorial books recounting the tales of the over 200 people who have died in this area over the past 150 years.

I was interested in the effort that has gone into building the many climbers’ huts that have dotted the Aoraki/Mt. Cook area over the years (there are currently seventeen huts in the national park). They used to have to walk the huts up in pieces, one sheet of corrugated iron per person at a time. I love this image of a chimney going up the peak as part of a hut-erection project in 1898 — it looks like a Halloween costume: 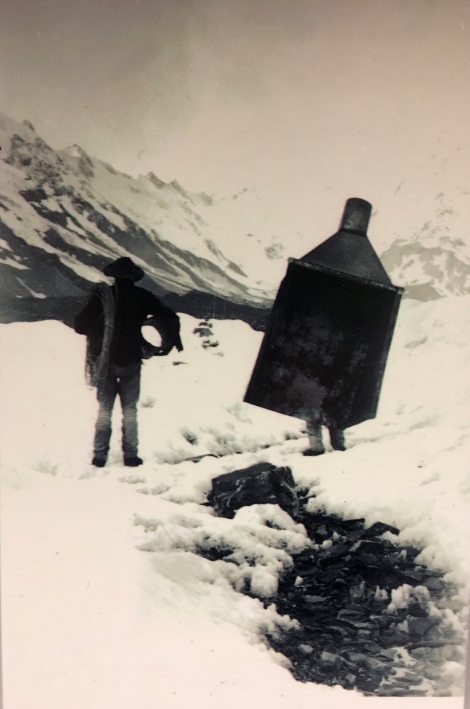 Nowadays hut building has become much easier — they just drop prefab buildings from helicopters and airplanes (Prescott was frustrated at the lock barring our entry to this model):

Prescott and I also went to the Sir Edmund Hillary Alpine Center, which includes a Museum and and a Theater/Planetarium (these are the kinds of activities you seek out when it’s raining in a national park). We saw a 3D film about Aoraki/Mt. Cook, learned a lot about the development of Aoraki/Mt. Cook as a tourism center, and watched a planetarium show about our solar system and its place in the universe (Prescott says the film was about “stars and stuff”).

Wanting to be outside, I took a very wet walk, first on the very short Bowen’s Bush trail and then on the longer Governor’s Bush walk. Both of these trails go through forest cover, making them good for a rainy day.

Neither walk offers anything much in the way of views, so you’re mostly in it for the beech forest (beech indigenous to New Zealand, not to be confused with beech in the US) the quiet escape, and the birdsong. You’re also in it for the many different kinds of ferns:

There aren’t any tree ferns in these woods, but some of the fern plants come up at least as high as my shoulder. It’s a wonderful variety.

My only “overlook” gave me this prospect, which was more of the mountains than I’d seen all morning (for perspective, note that snow-capped Aoraki/Mt. Cook itself should be rising somewhere just behind the leftmost peak below).

Taking a spur toward the Red Tarns trail, I found this stream bed …

We left Aoraki/Mt. Cook wishing that we had seen more, but having really enjoyed our stay.

For our final rainy morning drive, we decided to stop at Tekapo Springs, which sits on the southern edge of Lake Tekapo. This is the perfect sort of thing to do in the rain. These aren’t actually hot springs — they’re just heated pools — but boy, did they feel good on a damp, chilly day. And you can look down at the lake (through the fog) … 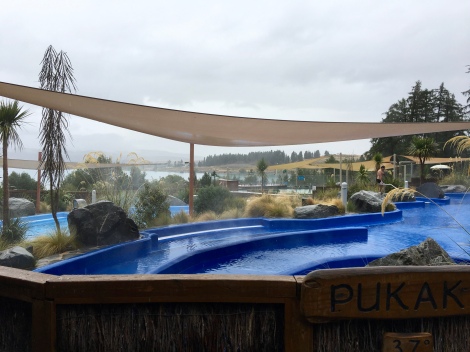 … or up at the fir forest on the hills:

The most famous landmark in Lake Tekapo is its quaint, perfectly-situated Church of the Good Shepherd, where we pulled over (along with dozens of other tourists) to take a quick picture. 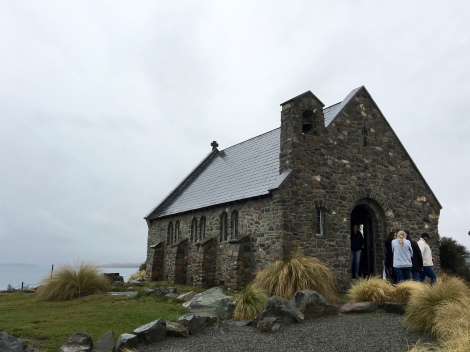 Our final stop of the trip was in the cute country town of Geraldine, where I enjoyed my final piece of New Zealand carrot cake (New Zealand carrot cake, filled with raisins, coconut, and walnuts, and topped with pumpkin seeds and dried fruit, should be added as its own new food group). We puzzled over the signage on this truck that was parked in front of us. Does a whole mob (but only a small one) need shearing? 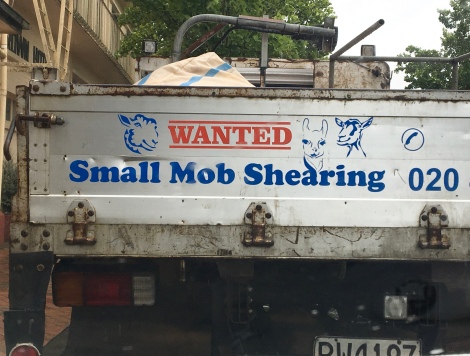 We loved our trip to New Zealand. We had very few complaints, other than (1) it’s a really expensive place to visit, (2) Prescott wishes that they had more hot sauce for his breakfast eggs, and (3) I wanted chai tea that tasted better. Tips for the next trip: