Last weekend, Prescott and I visited Lorong Buangkok, the only remaining kampong (village) on the main island of Singapore. The cab dropped us off at 7 Lorong Buangkok, a short industrial road, and our first sight was this giant HDB complex:

Nearby were several light industrial buildings, which housed items like concrete blocks and wood that they use here for construction scaffolding (which Prescott notes would never be legal in the US):

So we thought we might be in the wrong place, because this didn’t look anything like the quiet, sleepy, old-time kampong we’d heard about. But then we saw these signs…

… and when we turned down the road, we suddenly found ourselves in a neighborhood unlike anything we’ve seen in Singapore: 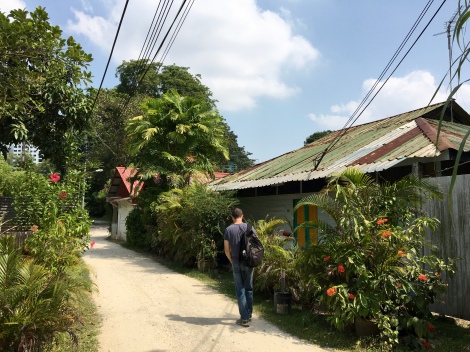 What makes this place different? Dirt roads and overhead wires, abundant haphazard greenery and corrugated tin roofs. Roosters crow and kids run in the street. It looks like a neighborhood straight out of the 1950s — and it is. 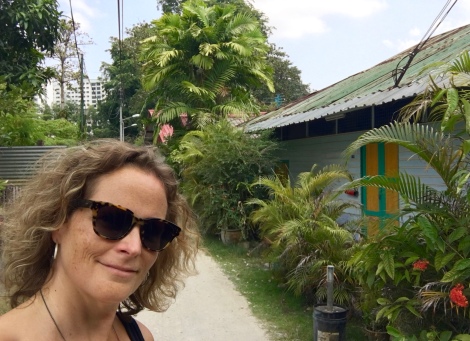 In 2009, The New York Times called this areas “Singapore’s last rural hamlet.” That captures this place well — in a country that’s focused on everything looking new and shiny and tidy, this neighborhood looks like the land that time (and the Singaporean government) forgot. 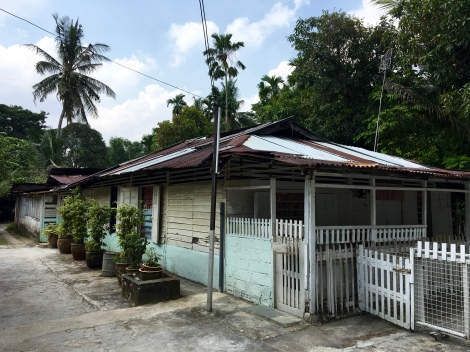 From some vantage points, you would only know that you are in the twentieth century from the big green trash bins… 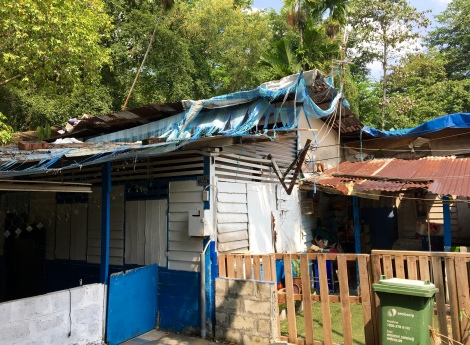 … though in other areas, the HDBs standing tall in the background bring everything very much into the present. 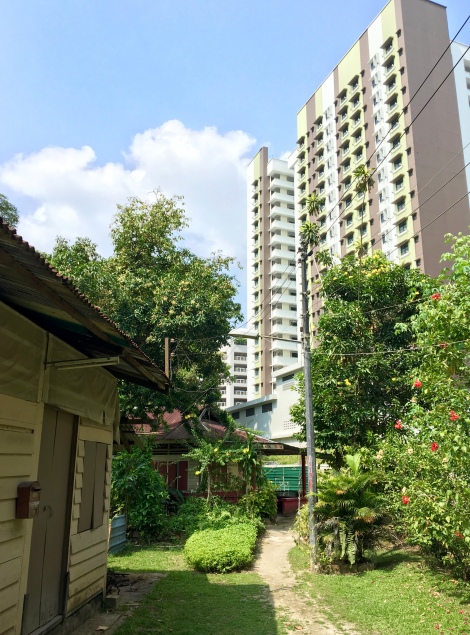 This 1956 kampong now houses about thirty families (roughly two-thirds Chinese and one-third Malay). It also boasts its own mosque: 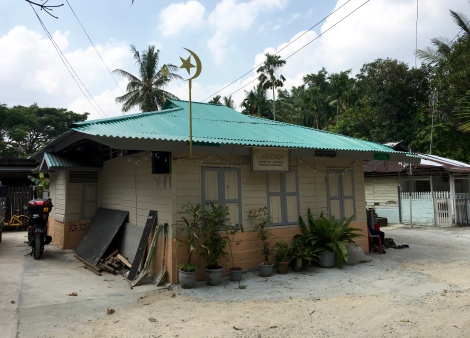 Here’s the amazing thing: there used to be hundreds of kampongs all over this island — along the beach, in the middle of coconut plantations up against the jungle — and now there is one. That’s a huge transformation. And it’s not clear whether the government will allow this kampong to remain, whether it will stay in place as a reminder of Singapore’s quieter and grittier past or whether the the bulldozers will come in to sweep it all away. On the one hand, Singapore appears to be growing more aware of its history and national heritage, so maybe there’s hope that this will be preserved. On the other hand, numerous articles note that Singapore’s Urban Redevelopment Board has Kampong Lorong Buangkok slated for the chopping block. So I’m glad I got to see it while it’s still standing.

It’s pretty wonderful to wander around this kampong (though given its small size, a walk through takes only ten minutes at a snail’s pace). There’s so much greenery, and it’s a huge change of pace and feel from the rest of Singapore. 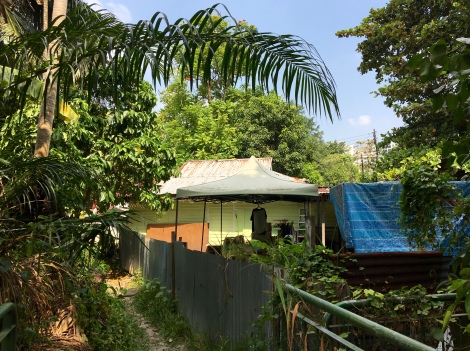 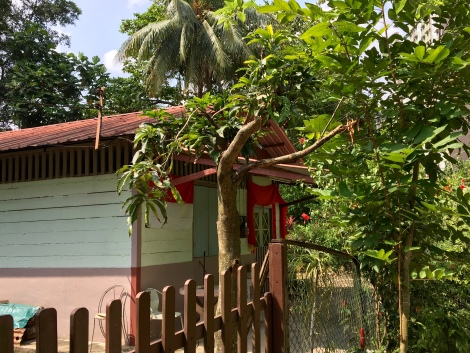 I loved the doors on the houses…

… but I didn’t take many close-up pictures because it’s clear that the residents are tired of being disturbed by curious interlopers. We found this on one tree (and while we’re not sure we really understood who or what the “negative creep” might be, we got the point).

While we were in the area, we took a walk along Punggol’s North Eastern Riverine Loop. Our trip took us along the east side of Sungei Punggol, a river that has been “canalized”:

This is a great place to get outdoors, though given the intermittent shade, it would probably better on a bike than on foot. Still, we saw things like a man riding a scooter with a macaw on his shoulder (I wish I’d been quick enough to capture that on film), Singa the Lion (the mascot of the Singapore Kindness movement)… 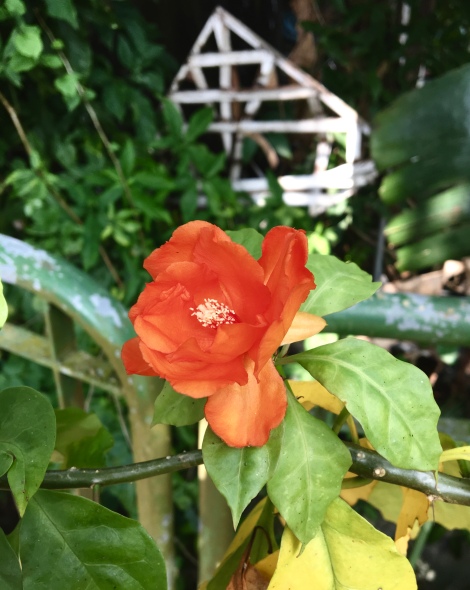 The young man who’d caught (and was about to release) this creature told us that it was a snakehead. He also let me hold it!

2 responses to “The Last Kampong Standing”