My sister and I have just returned from Ihuru, a postage-sized island that’s part of North Male Atoll, smack in the middle of The Republic of the Maldives. The entire island is taken up by one small resort (Angsana Ihuru), an even smaller swath of jungle, and a disk of a beach that you can walk around in ten minutes flat.

Of the dozens of resorts in the Maldives, we chose this one for its spectacular house reef, a ledge of coral surrounding the island that you can swim out to in seconds right from the beach.

The reef is like something right out of a nature documentary, a spectacle of fish and other sea life so spectacular that we took to the water for about six hours every day.

We even swam with sharks! 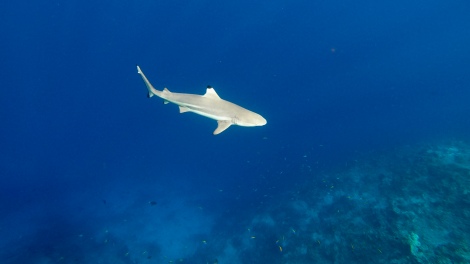 The underwater world was so fantastic that I’ll write about it in other posts — here, I’ll focus on the Ihuru Island experience. To get to the island from Singapore, you take a five-hour direct flight, and then a speedboat picks you up right at the Male airport (it’s a surreal version of having a cab driver waiting, but in this case, you walk out of the arrivals hall and onto a boat). 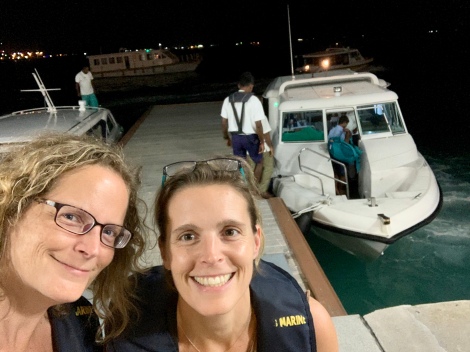 The boat ride runs a brisk 30 minutes or so, at which point you are deposited at the end of the island’s jetty: 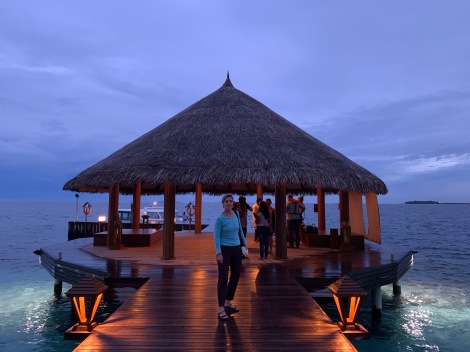 Then you’re shown to your villa, which has a private outdoor seating area …

… and two chairs a few meters away out on the beach:

It’s a lovely little retreat space, though if you want to get out and about, you can go to the spa, the dining room, or the bar that juts right out over the ocean: 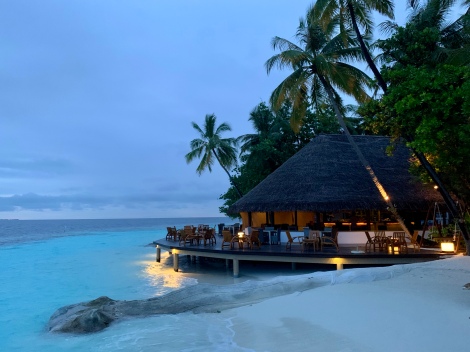 Insider tip: everything is expensive in the Maldives, and it’s cheaper to eat lunch or dinner at the bar than it is in the set-price dining room. The bar also hosts the occasional evening event, like this local dancing-and-drumming performance:

But by and large, this is not an entertainment type of place — there’s no nightclub, no pool, no gym, no kids’ center. The focus here is on (1) relaxation and (2) marine life. For the latter, there’s a marine center that you can visit to arrange snorkeling or diving trips, to read fish ID books (we spent a lot of time on that particular exercise), or to borrow gear like snorkel masks and kayaks (the construction hat here is a bonus — my sister found it floating in the ocean): 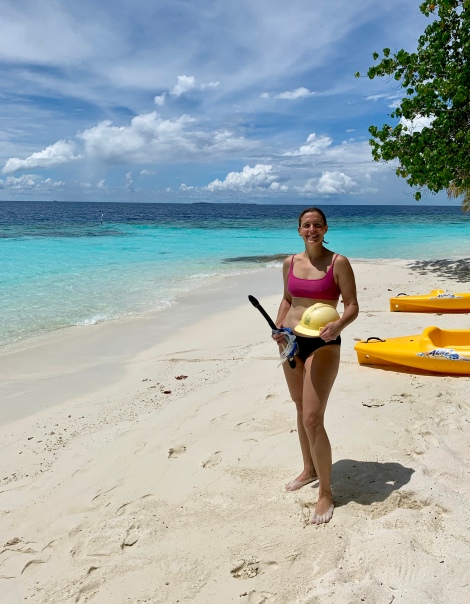 You can also go out for a walk on the sand, but you won’t get far before you’re back where you started. 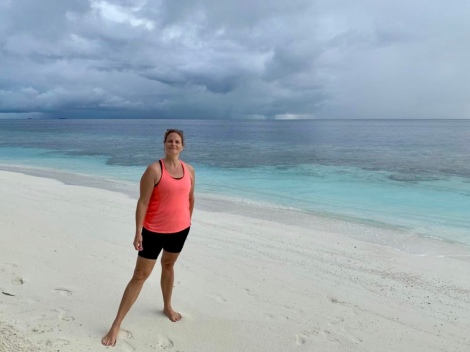 For hanging out, this is heaven for lovers of beaches and electric-blue water:

Unfortunately, the Maldives are all at risk of sea level rise from global warming, so there are all sorts of erosion prevention and reef protection measures in place. The beach is punctuated by sandbag berms that jut out into the ocean … 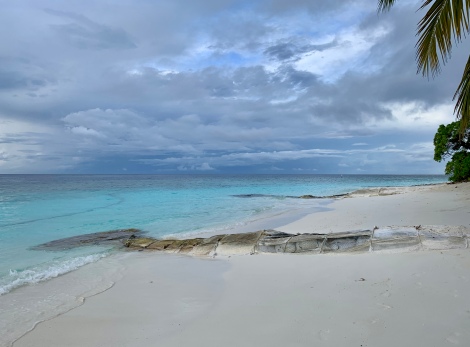 … and a triangular sand-moving device sits out in the water just off-shore: 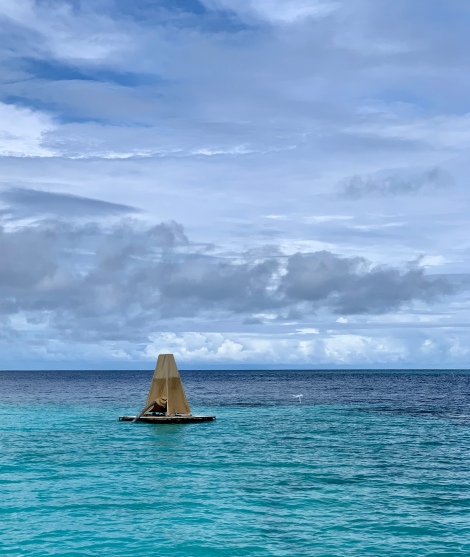 Beyond what I’ve already mentioned, there’s not all that much to see on the island itself. We ran across exactly five different kinds of animals: a solitary grey heron, geckos, flying foxes (giant bats), white-breasted waterhens (the national bird of the Maldives) …

… and a single small lizard: 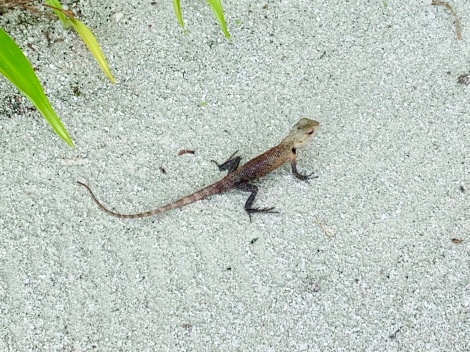 The vegetation is of the green rain forest variety, with very little in the way of flowers, though we did really like this shrub:

If you want a (very slight) change of scenery from this tiny island, the Angsana Ihuru resort offers free five-minute speedboat rides to its sister resort, the Banyan Tree, which sits on Vabbinfaru Island just across the way:

Here you can walk around another beach, hunt for shells (there are many more at Banyan Tree than on Ihuru), and watch a sting ray feeding (which seemed an odd spectacle given the resort’s environmental mission, but was still fascinating).

Jocelyn and I went over not to see the rays, but to participate in a reef clean-up snorkeling adventure. This meant that we got to see things like their tiny coral nursery …

… and helped find and dispose of starfish that are detrimental to the reef’s development (the alien-looking thing on the left is a crown-of-thorns starfish, and it’s the worst of the bad guys in eating up coral just about as fast as it can grow):

… and the clouds moving over the deep morning sky … 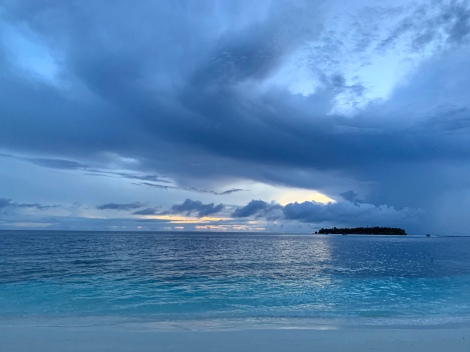 … and rainbows on the rainy ones …

… and sunsets that come far too early in the evenings: 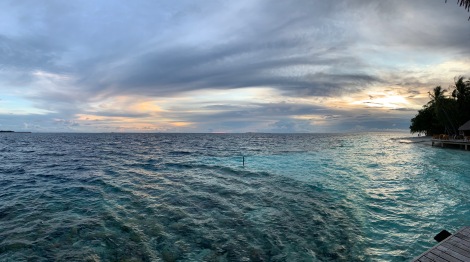 It’s really a special place — and it was very hard to leave!