The city of Turin may best be known for cars, chocolate, and a shroud, but it is also home to what many will say is the largest and best collection of Egyptian artifacts outside of Cairo.

The Museo Egizio — an institution since 1824 — now houses over 26,000 objects. Many of these antiquities made their way to Turin thanks to the collecting mania of the Dukes of Savoy, and the collection exploded in the early 20th century courtesy of Egyptologist Ernesto Schiapperelli. There’s so much — and Egyptian history is so long and vast — that it would be impossible to offer a good chronological summary here (which is how the museum is ordered). Instead, here is a look at some of the types of objects that you’ll find if you visit: 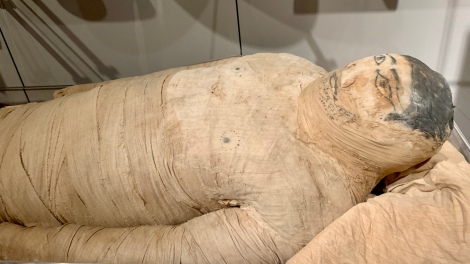 The mummies here include the guy above, who was entombed circa 2000 BCE, and this prehistoric example:

As you can see, the museum is very crowded (and because the audio tour focuses on just a few dozen items, certain artifacts are more crowded still).

The Egyptians didn’t just mummify humans — they also mummified everything from shrews to bulls to cats (above). The museum also has coffins (containing mummies) of a falcon … 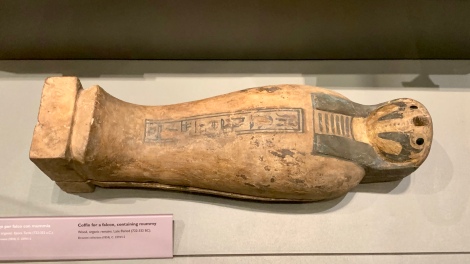 To me, this unexpected section alone was worth the price of admission. 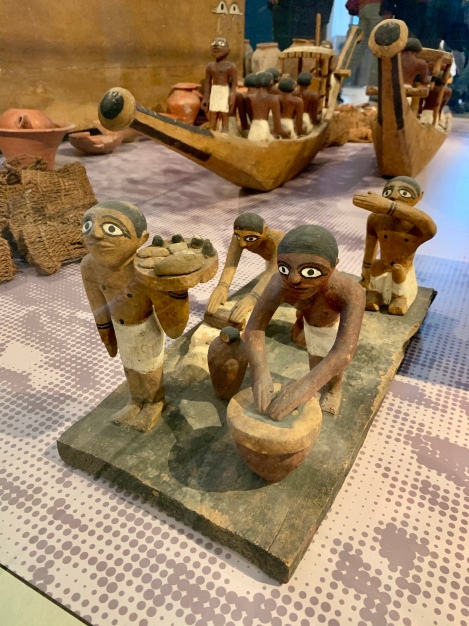 The Egyptians believed that the afterlife was its own world, one in which the deceased would need to eat, drink, and generally be provided for. This meant that when you died, you would need fields to be tilled, granaries to be manned, and food to be prepared — and in the Middle Kingdom period, you would be buried with small figures who would do all of that work for you.

Boat figures were especially common — they would do your fishing and take you on travels down rivers in the underworld.

When the Eyptians mummified the dead, they removed the internal organs and embalmed them in four separate jars, one organ per jar, one jar per funerary deity (Imsety, Hapy, Duamutef and Qebehsenuef — all four sons of Horus, the god of kingship and the sky). 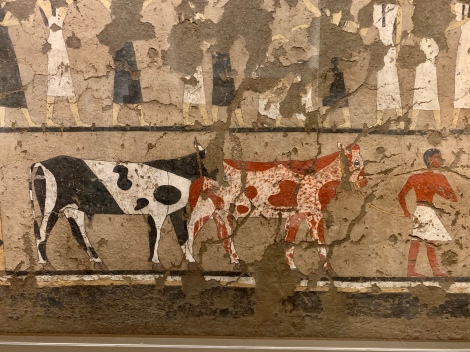 Egyptian tombs were richly painted, and it was common for scenes to feature agricultural work, granaries, and animal husbandry. 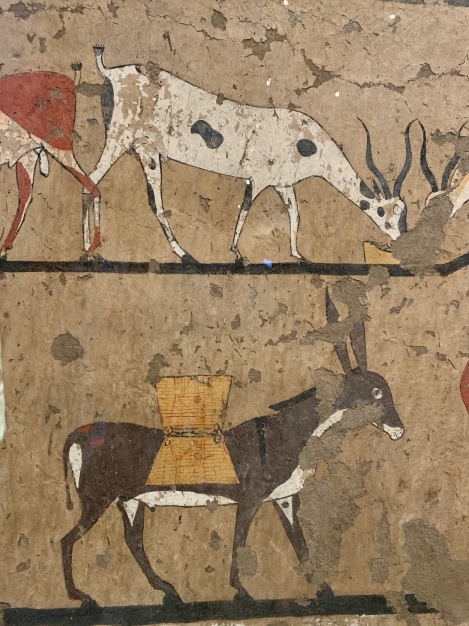 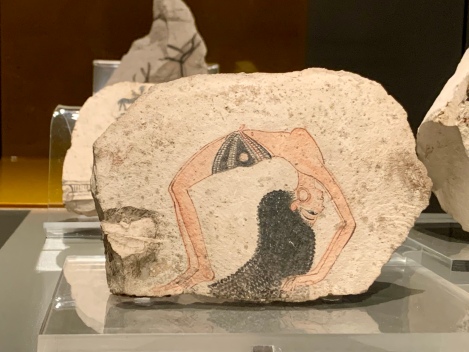 Almost all Egyptian painting that we know came from tombs, where tradition and religious beliefs limit the artwork to a very narrow set of proscribed subjects. And tomb painting had to be done in a highly stylized fashion, always overseen by high-ranking officials. So it is unusual to have a piece like the one above: a fragment painted by an unknown artist (for unknown reasons) in a style unlike anything else that’s every been found.

Of course, household goods might also be painted, such as this bowl from the New Kingdom period. 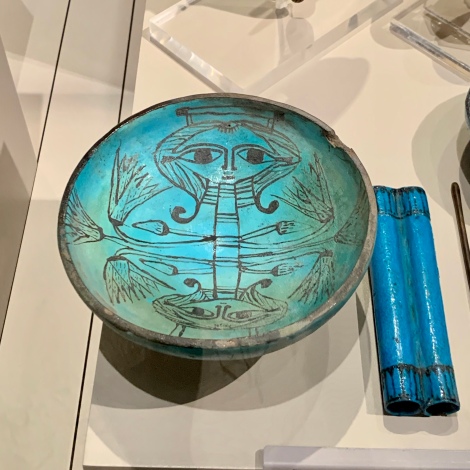 It’s nowhere near as remarkable or rare as the woman bending over backwards, but I still found it fairly arresting.

Cloth rarely stands the test of time, so pleated tunics like these are extremely rare. 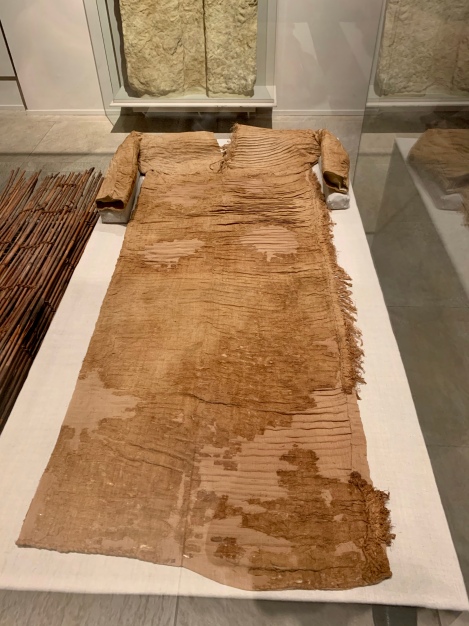 Remarkably, the museum in Turin has about a dozen of these specimens, both amazing examples of cloth made over 4,200 years ago.

The Egyptians believed that you might be called upon to work in the netherworld, so important people were often buried with mummy-shaped images called “shabtis” to work as substitutes. Over time, people were buried with an increasing number of shabtis — the ideal number was 365 (one for each day of the year) plus 36 foremen (one for every ten workers).

Books of the Dead

The Museo Egizio has several remarkable examples of Books of the Dead, sets of spells that were buried with the deceased that gave detailed instructions for dealing with and behaving properly in the afterlife: 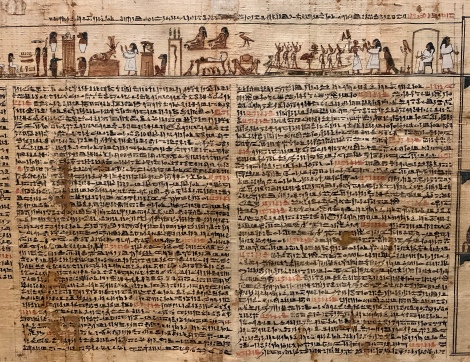 There was no one single text; each person who was buried with one of these papyrus had their own copy with their own sets of spells. The page below details the weighing of the heart of the deceased — if the scales came out in your favor, you were permitted to go on to the afterlife; if not, you would be eaten by Ammit, the crocodile-lion-hippo creature waiting just beyond.

Over time, Books of the Dead became more and more decorative: 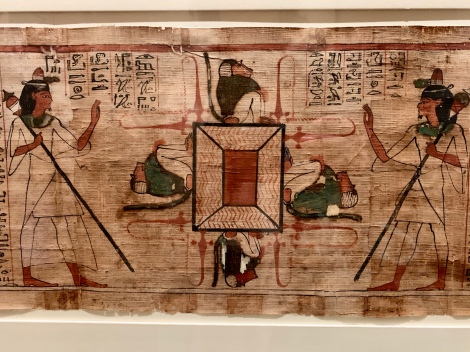 I’m assuming the the monkey here is Babi, the king of the baboons and the first-born son of Osiris, the god of the underworld. 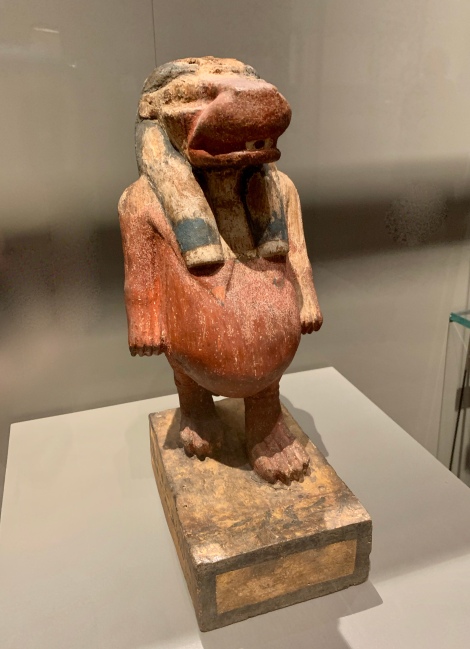 The pantheon of Egyptian gods is well known: Osiris, Isis, Anubis, Horus, Ra, and their cohorts. But the common people in Egypt also venerated less familiar two household gods: Taweret, usually portrayed as a pregnant hippo (above), and Bes, who can take on a multitude of forms:

Bes and Taweret were very popular in everyday homes, and they were often depicted in ridiculous or grotesque ways in order to ward off evil spirits. 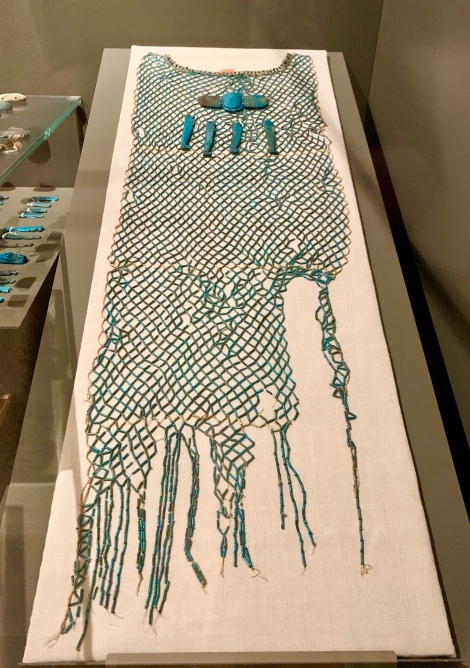 Starting roughly in 880 BCE, the Egyptians began attaching nets like these to the bandages around the deceased.

The Museo Egizio has coffins galore, some with mummies inside (as you can see above), and all of them with wedjat eyes (the eyes of Horus): 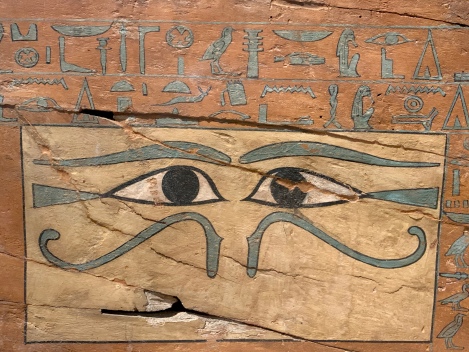 Coffins often came stacked one inside another, with fancier detailing as you moved to the middle …

… and then to the outer coffin: 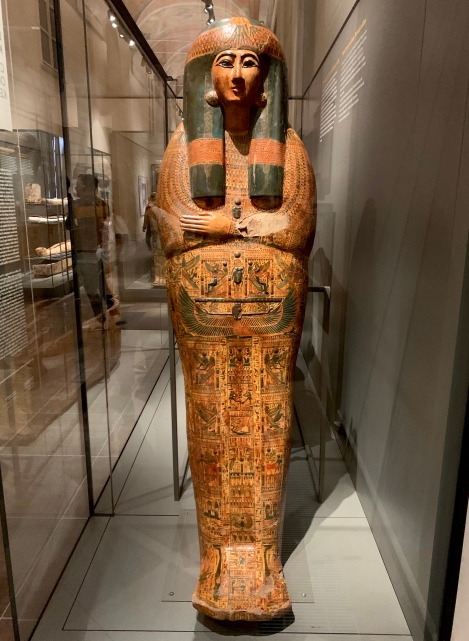 This outer coffin has particularly fine and detailed designs, including some inspired by spells from the Book of the Dead.

The Egyptians eventually moved toward having stone sarcophagi rather than wooden coffins — this one weighs more than a ton!

The Egyptians left statues of hippopotami in tombs to control chaos and give the deceased power — but first they broke off the hipppos’ legs to make them less dangerous and control their negative forces. Then there were these much older guys from the Predynastic period, who were on a shelf labeled “cosmetic boxes” …

… but I’m not sure what kind of cosmetics would have fit inside.

There are so many great statues (and fragments of statues) that it’s hard to know where to start.

There’s even one entire room devoted to allowing visitors to compare the many different ways in which Sekhmet (the lioness goddess of warfare and healing) was portrayed by different sculptors within a similar time period: 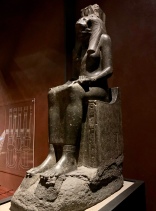 This amazing mudbrick funeral chapel was constructed towards the end of the 18th Dynasty (1353-1292 BC), and it would have stood outside of the tomb as a place for the living to come and pray. 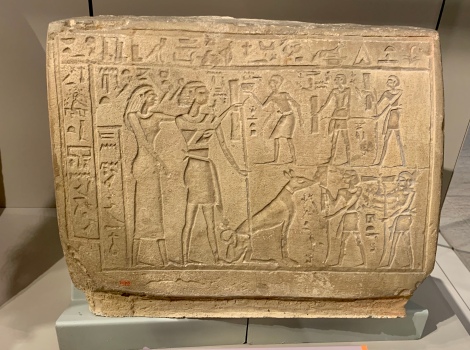 I am fascinated with Egyptian limestone carvings, and there are more at this museum than I can possibly count.

This would be a great place to study hieroglyphics!

Papayrus scrolls offer another opportunity to study hieroglyphics, both in Books of the Dead and in other funerary writings.

Above, the solar boat is being pulled by four dogs (or jackals) …

… and here we snakes in various forms: at the top, seven cobra-headed beings represent darkness, while below them, four cobras worship the hieroglyph of the horizon. 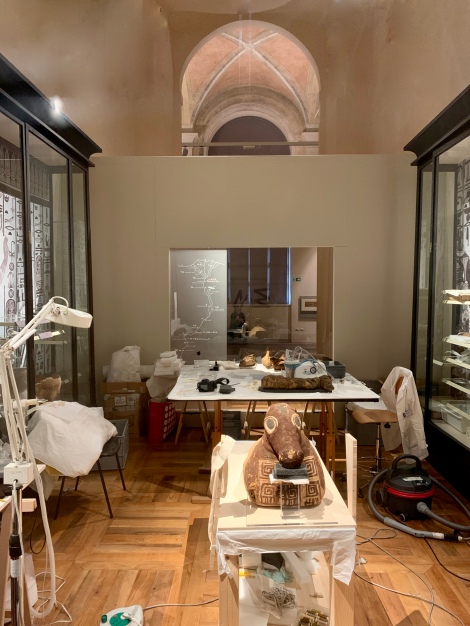 If you’re curious to see how people restore and preserve ancient artifacts, the museum has two rooms where you can watch the experts at work. Unfortunately, no one was in these rooms on a Saturday morning — which really is a shame, because I think they’re working on a casing that contains mummified cow parts. 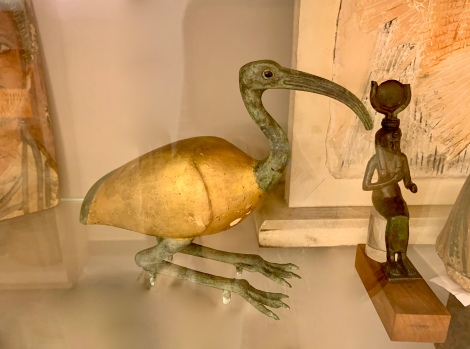 The museum doesn’t say much of anything about these, but as you come to the end of your visit, you’re presented with a case titled “Forgeries and Doubtful Pieces.” I loved that these were included!

The museum has so many pieces that it would be impossible to display all of them individually — so there are shelves and shelves of barely-curated pieces labeled “Galleries of Material Culture: Open Storage.” These are largely arranged by material (such as ivory, above, and glass, below):

It’s quite a collection, and it would take days to do the whole thing justice!

One response to “Egypt in Italy”